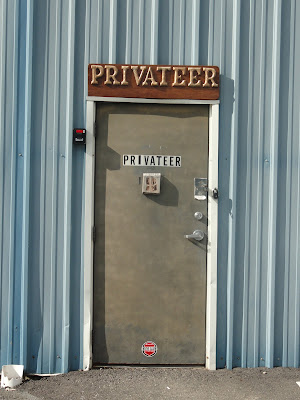 In many respects, a privateer was simply a legal pirate, and an enemy would not even accept the validity of their legality. Privateers received letters of marque from a government, granting them the right to attack foreign ships, and they were frequently used during the 16th-19th centuries. During the Revolutionary War, American privateers plied the waters, attacking British ships, and one of those privateers was Andrew Cabot. Six generations later, his descendant and namesake, Andrew Cabot, is honoring this history with the creation of Privateer Rum.

About five years ago, Andrew Cabot discovered the history of his ancestor, and also learned that the original Andrew Cabot had operated a rum distillery in Beverly, Massachusetts. This inspired Andrew, and with his partner Nelse Clark, they started a rum distillery in Ipswich. Recently, I toured their facility, getting to meet Nelse and Jeff Murphy, their Head Distiller, and tasted their two products. 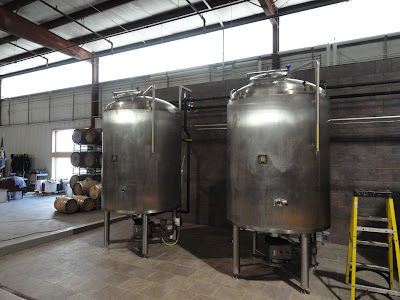 The distillery, which opened last year, is nestled in a warehouse within an industrial area of Ipswich, a short distance from the Clam Box. Cabot and Clark initially hired Eric Watson, a Master Distiller from West Virginia, to design their facility and create the basic recipes for their rum. Since then, Jeff Murphy has been refining those basic recipes, so they can produce a unique product. Jeff has a background in commercial brewing, having spent a couple years in Singapore and then a number of years in San Antonio, Texas, making vodka and whiskey. Jeff explained to me how they made the rum, answering all of my questions.

In making rum, obviously the most important ingredients are the sugar products that are used, most rums being produced from molasses. There are three basic quality levels of molasses, the lowest being blackstrap. Privateer does not use blackstrap in their rums, preferring a higher quality molasses, and obtain their sugars and molasses from AmCane Sugar, LLC., most which seems to originate from the Caribbean. In addition, not all of their rums use molasses.

They currently have two fermenters, pictured above, which each hold 15 barrels, and they will soon obtain a third fermenter, which will be twice as large. They typically ferment their product for about six days, creating a mixture that is about 8% alcohol. The alcohol will then be stripped out and the mixture will next go be placed into the pot still. 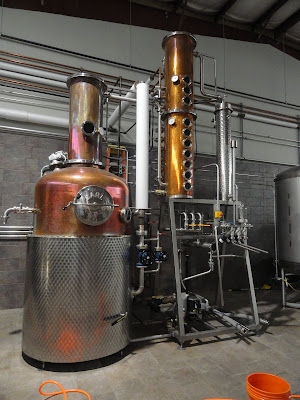 Privateer uses both a pot still and column still to produce their rums. First, the mixture is put into the pot still until it reaches about 40% alcohol when it is then put through column distillation, which will create a liquid that is 40%-90% alcohol. Next, that portion of the rum which is designated to become white rum will be placed into stainless steel tanks for a time until bottling. It takes about eight weeks for their white rum to go from column distillation to bottling. 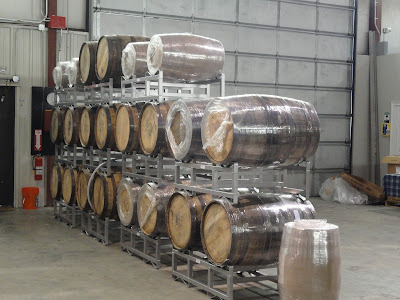 The portion of their rum that will become amber rum will undergo oak aging, starting with a period of about 6-8 weeks in Hungarian oak. They use new charred barrels, most with a medium toast and medium char, though they have some with a medium toast and heavy char. After some experimentation, they discovered that Hungarian oak gave their rum the specific flavor profile that they desired. After that time, the rum will then be placed into used Bourbon American oak barrels. Their amber rum ages for approximately four months, though they are aging a small portion for much longer. At the moment, they possess about 25-30 barrels which contain aging rum. 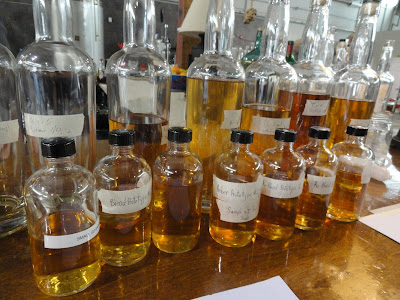 Their amber rum is a blend, and Privateer hires Nancy Fraley, the Director of Research at the American Distilling Institute in San Francisco, to blend their rum for them. Above, you can see a small portion of the sample bottles that Nancy uses to create a blend, indicative of the complexity of the process. Though the amber rum will be essentially similar from batch to batch, there will be some minor flavor variation as this type of artisan blending is far from an exact science. The first two production runs of the amber rum were only about 100 cases each.

Jeff believes that the specific sugars, amount of aging and type of oak that they use makes their rum more unique than other rums on the market. Their rums generally have light rum flavors, as they do not rely on as much molasses as other distilleries use. Jeff also told me that there is really no tough part of his job, and his enthusiasm and passion for his work and rum was quite evident. 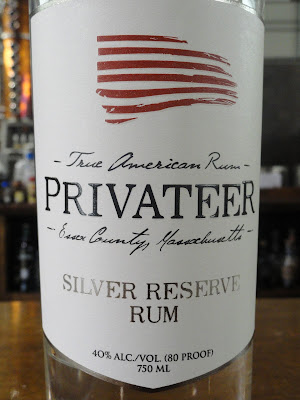 Privateer currently produces two rums, a white and amber, respectively named Silver Reserve and True American. The flag on their bottle label is the original 13 stripes and "True American" was the name of a ship in the fleet owned by the original Andrew Cabot. Both rums were primarily intended to be used for mixing in cocktails, but they are also sippable on their own. Nelse ran me through a tasting of their two rums, as well as giving me other rums to compare them against, such as Bacardi White and Mount Gay Eclipse.

First, I began with the Silver Reserve White Rum ($23-$27), which is made only from cane sugar and brown sugar, without any molasses. So, in some respects it reminded me more of a Cachaça than other rums. It is 80 proof, and had a very appealing nose, smells of tropical fruit, such as banana, with herbal accents. Both come out on the palate as well, especially the herbs, such as anise and fennel. It actually presents a fairly complex taste, very different from many other white rums, and I very much enjoyed its herbal elements. In addition, it is fairly smooth on the palate, with only a mild bite on the finish.

This is actually a white rum that I could drink on its own, such as on the rocks with maybe a sprig of basil. They suggested that in making cocktails with this rum, that using herbs might be best to bring out the rum's flavors. For example, they suggest a Light & Stormy, using their rum, ginger beer and some muddled basil. As I prefer more savory cocktails, this rum would work very well for me and it receives a high recommendation. 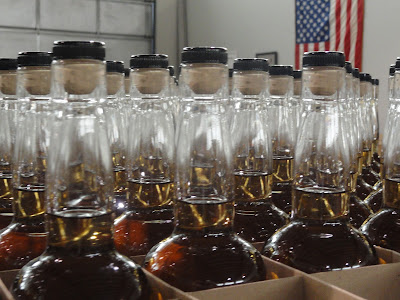 Their True American Amber ($28-$33) is produced from a blend of molasses, cane sugar and brown sugar with the molasses present to give it more body and flavor, though trying not to be too heavy handed with it. Though it is oak aged, they do not list an age date on the labels of their Amber. This is 90 proof, and has a more subtle aroma of spice, butterscotch and tropical fruits. It has a rounder mouth feel with pleasant tastes of vanilla, spice, coconut, and minor molasses notes. Overall though, it tends to be a light rum, lacking the depth that can come from longer aging. It shows potential, and in time, their production should improve in complexity and depth of flavor. For my preferences, I would use this in cocktails rather than sip it straight. But I look forward to the future of this rum. 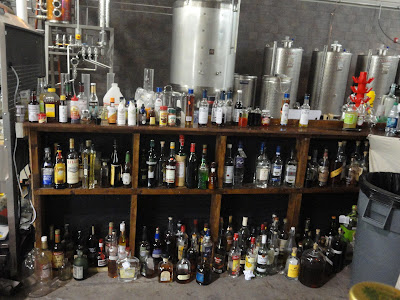 At the distillery, they even have a fully stocked bar area where they experiment with creating cocktails with their rum. As their products are still new, they are constantly learning more about its versatility in various cocktails.

Currently, Privateer Rum is available at about 150 accounts, a 50/50 split between restaurants and wine/liquor stores, including places like Gordon's Fine Wine, Kappy's Liquors, Rialto, Clio, and Mistral. They are self distributing and do not yet sell outside of Massachusetts. 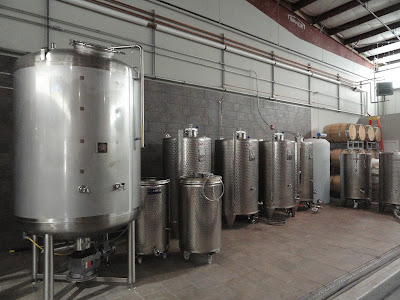 You can also purchase your own barrel of Privateer rum, from 3-15+ gallons, which includes a one-day distilling workshop to help teach the art of distilling. Prices start at $495 and the next workshop is scheduled for April 21. The prices actually seem very reasonable if you break them down. For example, for $495, you will get eighteen 750ml bottles of rum, which breaks down to only $27.50 per bottle.

In the future, Privateer has plenty of plans, including adding additional rums to their portfolio. They might create a Navy Rum, which would be aged longer and taste richer, or a Clean Shore Rum, where they redistill parts of their white rum. They also want to produce some limited edition Special Releases, as well as experiment with different barrels, such as Sherry and Cognac ones. 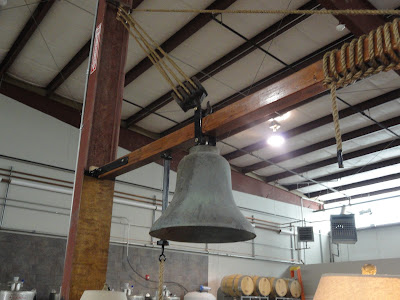 Though they are within a warehouse, that doesn't mean they can't make their facility look cool. This is a bell that was recovered from an undersea wreck.

Privateer is still a new company, continuing to learn and refine their products, but has already done well and has much potential. Their Silver Reserve is an excellent product and you really should check it out. Their True American Rum is a tasty product, which is sure to gain depth and complexity with time. If you are in Ipswich, stop by for a tour and tasting. If not, look for their products at local restaurants and wine/liquor stores.
Posted by Richard Auffrey at 4:00 AM

Fantastic historic and distillery info. I love hearing about the history side as well as in depth notes on the products itself. You hit that right on the head. And that salvaged bell is pretty awesome.

As for their rums, I think Privateer is off to a great start. Like you, I am anxious to see where their Amber goes with more aging, but find it to be very smooth to sip for only 4 months old.

The Silver totally surprised me b/c I have never tried one that I enjoyed this much. The tropical and floral notes with some anise are a perfect balance and I look forward to summer so I can properly consume these beverages.

It's exciting that this craft distillery movement is happening in Boston's backyard. Thanks for sharing! I look forward to your next post. Cheers!

Thanks Jon for your comments. It is great to see these local craft distillers.