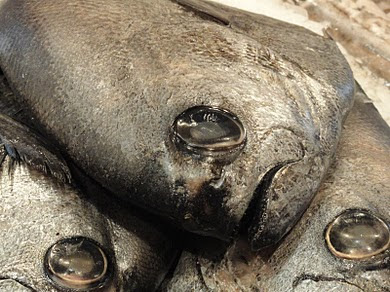 "Fishing is much more than fish. It is the great occasion when we may return to the fine simplicity of our forefathers."
--Herbert Hoover

Yesterday, I posted a Q&A with Roger Berkowitz, of Legal Sea Foods, concerning last year's blacklisted seafood dinner. Now, I want to comment on some of his answers, as well as address some of my own thoughts on the impact of the dinner.

At some point, despite the original, innocuous intent of the dinner, it transformed into something much more public and controversial. As I have commented before, it seems that eventually Berkowitz intended to foment controversy, to spark publicity and discussion. I don't believe he should be faulted for this, as plenty of people, on all sides of the sustainable seafood movement, have engaged in similar behavior. Controversy garners attention and that is often what is sought. You can't have a meaningful discussion unless people are listening.

An unfortunate side effect of creating controversy, as Berkowitz pointed out, is that it can inflame emotions, thus clouding the issues. It is clear that occurred in this instant, as some people reacted in the extreme even before the dinner occurred and Berkowitz was permitted to make his case. There is much passion involved in these issues, but it cannot be allowed to cloud perceptions.  Once again, as Berkowitz pointed out, seafood sustainability is a complex issue, and blanket generalizations are usually incorrect. There is much gray, and everyone involved in this area should try to find ways to work together to resolve the ambiguities. We need to approach these matters with an open mind, willing to question everything (which is the best way to approach any issue).

On a more practical level, during the past year, Legal Sea Foods has "..tried to enhance our staff training on sustainability and our company practices in this area." That is a positive for consumers who will be able to receive more answers from their servers on sustainable issues. At any seafood restaurant that wants to be sustainable, having a knowledge staff is a significant step in that direction. It was also good to see that Legal added smelts to their menu this past summer, a tasty and sustainable choice.

There was more good news in the answers as well. First, the Vietnamese shrimp farm has now received certification from the Aquaculture Certification Council, Inc., indicating its positive efforts in sustainability. That is a significant step forward, and hopefully the farm will be a role model for other shrimp farms in that region. Second, it appears funding may soon be awarded to an OAWRS study, and there could be a stock assessment of cod in the late spring. OAWRS has the potential to provide much more accurate fish assessments than the current methods and it is good to see forward steps in this direction. We should support cutting edge scientific methods to enhance our knowledge of the sea. 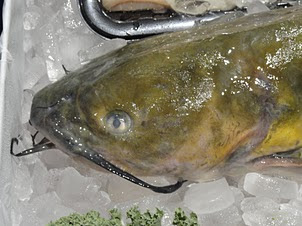 As for my own reaction to the blacklisted dinner, much of it coalesced this past fall as I was struck by the lack of reaction to another "blacklisted" seafood dinner. In October, Chef Richard Garcias of 606 Congress presented a Head to Tail Fin Dinner, with a menu including Monkish Carpaccio and Deep Fried Cod Tongue and Cheek. The Seafood Watch lists Monkfish as an Avoid and Atlantic Cod, which was also on the Legal blacklisted dinner, may also be an Avoid, dependent on the method of catch.

This dinner was not advertised as a "blacklisted" dinner and the restaurant has a reputation for using sustainable seafood. Yet the bottom line was that the restaurant did not accept the Avoid pronouncements of certain sustainability groups, just as Legal Sea Foods had not. So, in essence, the two seafood dinners had much in common, but the reaction to each was very different.

The 606 Congress dinner was not the focus of any opposition, criticism or controversy, except through my own posts. Why was this the case and was it an isolated incident? Or have sustainability proponents begun to accept that the issues of seafood sustainability are far more complex than simply an Avoid declaration? Part of the matter was probably that 606 Congress did not make controversial pronouncements about their dinner, keeping it more low key, though certainly not hiding anything either. It might also be a matter of trust, that sustainability proponents are less likely to trust a large company like Legal than a smaller restaurant like 606 Congress.

But, I feel that we certainly should ask questions under all of these circumstances, if only to stress the importance of such matters as well as to better understand the issues. Seafood sustainability is a complex set of issues, and new information arises all the time while old information gets revised. Because of this, we must be open to question our assumptions, willing to consider new data and studies, willing to change our positions if warranted. Don't let your emotions get in the way.

Take time to learn more about seafood sustainability and avail yourself of educational opportunities when they arise. For example, attend the International Boston Seafood Show in March, which will offer numerous opportunities to learn more about seafood sustainability. Find restaurants and purveyors who you can trust, but don't be afraid or reluctant to ask them questions. In the end, we all have the same goal, the preservation of the resources of the sea, so we should be able to find ways to work together, to learn together, and dine together.

“With earth’s burgeoning human population to feed we must turn to the sea with understanding and new technology. We need to farm it as we farm the land.”
--Jacques Cousteau
Posted by Richard Auffrey at 4:00 AM