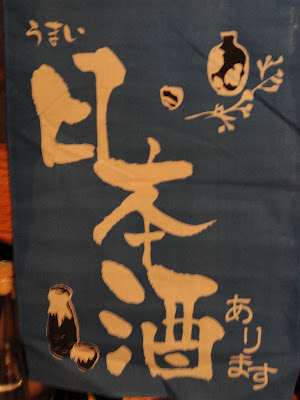 (The above sign says, Umai Nihonshu Arimasu, which translates as "Great sake here.")

Now, The Mainichi Daily News reports that Sake exports in 2011 have set a new record, a very positive continuation from 2010.  In 2011, Sake exports reached 14,013 kiloliters, up about 243 kiloliters from the previous year. It had previously been thought that exports might take a hit in 2011 because of the terrible disasters which struck northern Japan in March 2011. The earthquakes and tsunami destroyed and damaged a number of Sake breweries in the Tohoku region. Plus, fears of contamination from the nuclear problems at Fukushima Power Plant raised consumer concerns.

But, numerous PR campaigns and programs were launched to help the Japanese Sake industry and they apparently were effective, considering the record number of exports. The public has reacted very favorably, buying sake to help support the industry, to help the recovery. I hope that this continues through 2012 and beyond, and that more people are willing to take a chance on premium sake. Wine stores and restaurants should take notice of this surge in sake interest and carry it at their establishments.  Sake is a fascinating and diverse alcoholic beverage which would appeal to most people if they only tasted it.
Posted by Richard Auffrey at 4:00 AM