The Drops of God: Volume 2 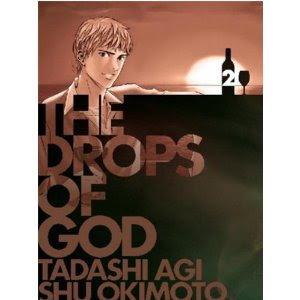 Could you identify a wine based on a painting that showed a nature scene? That is the dilemma that faces our protagonist, Shizuku Kanzaki. At stake, a wine collection worth over $20 million dollars.

After my joy at the release of an English translation of The Drops of God: Volume 1, I was excited to pick up Volume 2, hoping that it was a worthy successor. The Drops of God: Volume 2 ($14.95) is a trade paperback, about the size of a usual paperback manga, of 410 pages, about 20 pages less than the first volume. Like a traditional manga, the book is read from back to front, which is a minor adjustment if you are not a regular manga reader and used to this format. It contains 20 issues of the original manga, 2 more than the first volume.

This volume picks up where the first ended, continuing the build up to a contest pitting three French wines against three Italian wines. The three wines must be selected in 1000, 2000 and 3000 yen ranges (roughly equivalent to $10, $20 and $30). But, before that contest occurs, there are a couple detours, additional contests for Shizuku, which challenge his palate and wine knowledge. And through this path, the reader will come to learn more about wine as well.

In the first detour, Shizuku is hired by a restaurant to assist with the wine pairing for a special meal that will be served to an influential restaurant critic. This results in discussions on food and wine pairing, from Chablis with oysters to Port (both Taylor's and Graham are shown) and chocolate. It is stated that French wine is intended to enhance French cuisine, rather than suppress its characteristics. It is seen as a marriage, joining similar tastes and scents. You will also learn which Chablis style best pairs with oysters. Out of this endeavor, Shizuku finds his first French wine for the greater contest against the Italian wines, the 2001 Saint Cosme Les Deux Albion Cotes-Du-Rhone.

Later, at a wine store owned by two brothers, he finds his second wine, the 2001 Domaine Philippe et Vincent Lecheneaut Marsanny village wine. He wanted a Burgundy and this section discusses the issue those wines as well as the concept of terroir. For his final wine, he wants a Bordeaux, and preferably one where the Cabernet Sauvignon is dominant. It is then that another detour arrives, a new contest to challenge Shizuku, but which may also deliver the Bordeaux he desires.

Maki Saionji, a wine importer and sponsor of Issei Tomine (who is Shizuku's competitor in the overall Drops of God competition), seeks Shizuku's help. Tomine selected five Bordeaux wines for an important restaurant tasting but one of the wines went bad due to shoddy handling.  So a replacement is needed and Tomine is unavailable. Shizuku is asked to taste through 100 Bordeaux wines and select a worthy replacement. But, it is actually a trap as Tomine's wine choices were higher end Bordeaux while Shizuku's choices are all allegedly lesser wines.

Shizuku accepts the challenge and chooses a wine which reminds him of a Masquerade, the 2001 Chateau Boyd-Cantenac, which is a Third Growth and the Chateau has a lesser reputation. But Shizuku is so confident of his choice, he makes a bet with Maki that his wine will best all four wines of Tomine. If he loses though, he agrees to give up the Drops of God contest, meaning that Tomine will receive his father's extensive wine collection. Shizuku's wine is in the 3000 yen range, and he will use it later in the France vs Italy contest.

This volume of Drops of God continues to "review" wines in more unique ways, describing the feelings and memories they invoke. One delicate Burgundy is compared to "a pale, thin girl who's always reading in a corner of the classroom."  Another Burgundy brings to mind "a flea market in Paris."   A Bordeaux brings to mind a field of sunflowers. Very evocative imagery, and better than a dry recitation of fruit and floral flavors and smells.

The manga also presents some thought provoking quotes, such as:
--"Wine isn't like designer bags. People who choose wine based on rating or brand name don't really love it."
--"I don't care about magazines. I trust my own senses."
--"The most important thing in wine tasting is a memory for smells and flavors."
--"Stimulating conversation, getting people to banter, that's the charm of wine."

At one point in the tale, Shizuku received a gift, a bottle of 1982 Chateau Le Pin (which currently sells for $8K-$10K a bottle). Rather than store it away, saving it as an investment or some special occasion (which might never arrive), he decides to open it with a couple friends, helping to console one of the friends who just failed her sommelier exam. Shizuku remarks: "It was a gift, so it's perfect for chugging." An irreverent attitude, but one to admire as well.

There were more Robert Parker references in this volume than the last, often citing his scores or opinion on certain wines, such as the 2002 Domaine Philippe et Vincent Lecheneaut Grand Cru, Clos de la Roche, receiving 100 points and the 2001 Chateau Boyd-Cantenac, Grand Cru Classe Margaux garnering much accolade from Parker. But, the message seems clear, that such points really shouldn't matter much and that wine lovers much first depend on their own tastes.

At the end of this volume, Shizuku goes to the attorney's office which represents his father's estate, desirous of finally reading his father's will. In the will, it states that wine is "no mere alcohol but a masterwork as of literature or art" But like such, it also states that no wine is flawless. Tomine then shows up, and agrees with Shizuku that they will unseal only part of the will, that which describes the first wine, the first Apostle, that they must seek. The wine is described with a scene of nature, woods, a spring, butterflies and more. They now have three weeks to determine which wine is referred to in this scene.  There is a cliffhanger though, and neither Tomine or Shizuku selects a wine by the book's end.


As the first volume, Volume 2 also impressed me and I feel this book would appeal to wine lovers of all knowledge levels. It adds excitement to its educational aspects, and may enable you to see wine in a different light. I highly recommend the Drops of God series, and you can look forward to at least three more volumes this year,  including: Volume 3 on March 13, Volume 4 on June 12 and Volume 5 on September 11. I suspect you might even see Volume 6 in December. I bet you never thought a wine book could be so cool.
Posted by Richard Auffrey at 4:00 AM

I hope you check it out, and if so, please tell me your thoughts.

You’ve heard of the Naruto favorite Make Out Paradise. Now comes the new