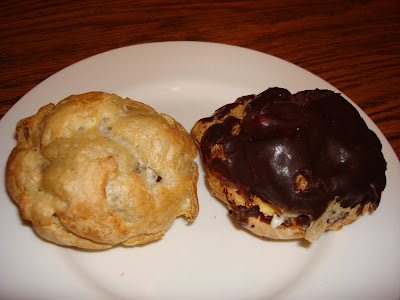 Some desserts are so decadently delicious that they are almost impossible to refuse. I feel that way about Beard Papa's cream puffs.

The first Beard Papa opened in Japan in 1999. Since then, their stores have been expanding all over the world, with new ones opening all the time. In the U.S., you can find them in Hawaii, California, New York, New Jersey and Massachusetts. Though there is only one store in Massachusetts, in Faneuil Hall. There has been rumor though that another one will eventually open in Harvard Square too.

I was at Faneuil Hall today so had to stop and get a few of their cream puffs. The cream puffs do not contain preservatives and they use organically-grown vanilla beans. They make their own crunchy pastry shells and fill them with their special whipped cream custard. Though they do not fill them until you order them. That way they do not sit and get soggy in the store.

The Boston location usually have vanilla, chocolate and strawberry custards. Currently they also have a pumpkin custard. Some of their other stores have different flavors such as green tea and coffee. You can get a plain puff, topped with or without powdered sugar, or an eclair puff, that is topped with chocolate. They cost around $2 each.

I love these cream puffs! The puff is crunchy and flaky and the custard is silky smooth and very flavorful. They do not taste overly sweet. And they insert plenty of filling into the puffs. They are much better than the traditional whipped cream filled puff. This custard is hedonistic. They are well worth the cost and my friends and family love them too. I had one at the store and brought a few home. They won't survive the night.

If you are near Faneuil Hall at any time, stop by and taste one. You will be hooked too.

Posted by Richard Auffrey at 4:55 PM