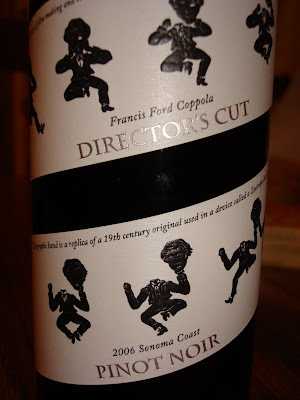 Isn't that an interesting wine label? It is a replica of a 19th century design for a Zoetrope. A Zoetrope was a device that used a series of pictures, on a single sheet of paper, to create the illusion of movement. A type of primitive movie. And this label now represents a new line of wines by Francis Ford Coppola.

Francis Ford Coppola, the famed film maker, has been involved in making wine for around twenty years. In 2006, he purchased a new home for his winery in Sonoma County. To commemorate this occasion, he chose to create a new line of all-Sonoma wines called "Francis Coppola Director's Cut."

The winemaker is Corey Beck, a Sonoma native, and he has produced these new wines, appellation-designated, from Sonoma’s diverse and distinctive appellations. He once worked at Chateau Montelen. He currently makes a Zinfandel, Pinot Noir, Cabernet Sauvignon and a Chardonnay. I previously tasted their Chardonnay at a local tasting and I was impressed. So, when I saw their Pinot Noir at another wine store, Kappy's, I bought a couple bottles.

The 2006 Francis Ford Coppola Director's Cut Pinot Noir ($27) is 100% Pinot Noir. The fruit for their Pinot Noir is sourced from several distinctive vineyards in subappellations renowned for producing superior Pinot Noir. They seek low yields so that the fruit possesses greater levels of concentration. The wine spends ten months in 100% new French oak and has an alcohol content of 14.5%.

This Pinot is a darker red than many other Pinots. It has an aromatic nose of fresh berries, especially cherry. That fruit comes out on the palate, including a bit of strawberry. A very nice start to the wine. On the finish, spice notes come out, maybe some clove or allspice. The finish lingers for a fairly long time. The transition from fruit to spice is seamless and nicely balanced. It was an intriguing wine and I would recommend it as a Drink & Buy.
Posted by Richard Auffrey at 5:00 PM