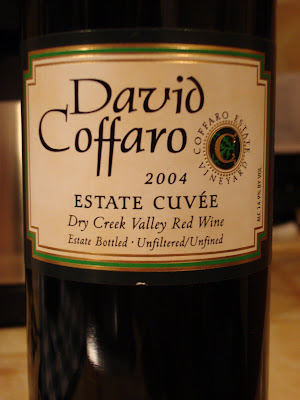 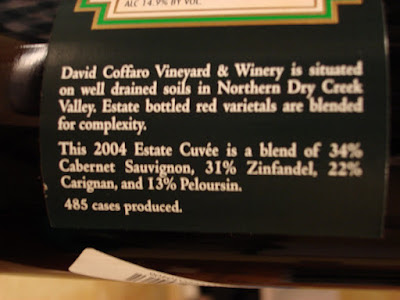 Want a low production wine that is an intriguing blend but that is also low cost? You probably don't have many options but I will give you one, the David Coffaro Winery.

The David Coffaro Winery is located in the Northern Dry Creek Valley of Sonoma County in California. It is only about twenty acres but there is quite a diversity of grapes planted there, including Cabernet Sauvignon, Petit Verdot, Zinfandel, Petite Sirah, Carignane, Barbera, Tannat, Sangiovese, Touriga, Lagrein, Aglianico, and more.

In 1979, Dave and Pat purchased the vineyard and for about 15 years they sold their grapes primarily to Ernest and Julio Gallo. Dave made a small amount of wine for personal consumption. It was not until 1994 that matters changed. The Coffaros decided to enter the realm of commercial winemaking. In their first year, they made about 400 cases. And each year that has continued to increase, to about 7,000 cases in 2006. The Coffaro portfolio now all use screwcaps. They started testing screwcaps in 2003 and by 2004 had completely changed over to screwcaps.

Their philosophy is that wine is often too expensive for the average consumer. So they wanted to be able to offer wines to as many people as possible. And they certainly do price their wines very reasonably, especially considering the wines are low production.

Coffaro wines can be difficult to find. They sell about 75% of our production through their Futures program. This is where consumers commit to buy wine before it is actually released, but at a significant discount. Only 10% of their production gets distributed to retailers, and most of them are in northern California. Luckily there are several local wine stores in Massachusetts that do sell Coffaro wines.

The 2004 David Coffaro Estate Cuvee ($27) is a blend of 34% Cabernet Sauvignon, 31% Zinfandel, 22% Carignan, and 13% Peloursin. It is unfiltered and unfined, and has an alcohol content of 14.9%. Only 485 cases of this wine were produced. Peloursin is a new varietal to me. It is an almost extinct French grape and was combined with Syrah to make Durif, also known as Petite Sirah.

This Cuvee is a dark red in color with a fruity nose, the smell of cherries and strawberries. On the palate, it is a juicy wine, with lush berry flavors. It has mild but firm tannins and a moderately long finish. It has character and is an interesting wine. I thought it might be more tannic or muscular but it is a far smoother and easy drinking wine. A pleasure to drink with or without food. I recommend this as a Drink & Buy.

I have had a few other David Coffaro wines and enjoyed all of them. I certainly respect his philosophy and he makes some very intriguing blends. Seek out his wines and enjoy.
Posted by Richard Auffrey at 6:13 PM