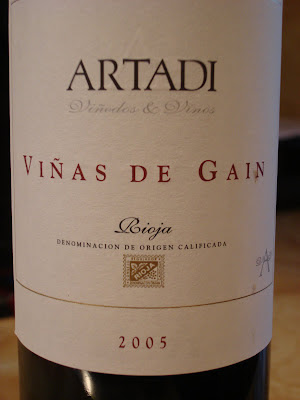 Though much is changing, there are still some people who only know Spain as the land of Rioja wines. Some of them even think that all Rioja wines are the same. But that is far from the truth. There are a number of different styles and producers that put their own unique spin on the Tempranillo grape. The Artadi winery is one such place.

The Artadi winery was established in 1985 by the winemaker, Juan Carlos Lopez de la Calle. He believed that the Tempranillo grape, when cultivated at high altitude, low-cropped, and from old vines, could produce an exceptional wine.

The estate consists of 75 hectares, including 25 that are owned by other farmers though controlled by Artadi. Harvesting is done by hand. Most of the wines are fermented in stainless steel tanks though the reserve wines are fermented in large wood vats. Artadi seeks the purity of extracted fruit with textures similar to Burgundy.
The other evening, I opened a bottle of the 2005 Artadi Vinas de Gain Rioja ($26 though it sells elsewhere for up to $36). This could be considered one of the Artadi entry wines, one of their least expensive wines. It is made from 100% Tempranillo from 40-50 year old vines. It spends 18 months in French oak and has an alcohol content of 13.5%.
This wine has a dark red color, though has a bit of translucence. It has an intriguing nose of ripe berries and almost floral notes. On the palate, you get dark berry flavors in a smooth, silky mouthfeel. The finish, which lingers for quite some time, provides lots of spice and very mild tannins. The finish also brings juicy berry flavors as well, all meshing together in a very satisfying wine.
I do find this wine to be more Burgundian in style. I can easily see how this wine resembles more a Burdgundy than a traditional Rioja. It is more subtle and not really a powerful Rioja. There is plenty of complexity and it is well balanced as well. This is a Rioja mild enough that it could pair even with milder foods.
I definitely recommend this wine as a Drink & Buy. And I will be looking for the higher-end Artadi wines.
Posted by Richard Auffrey at 5:06 AM