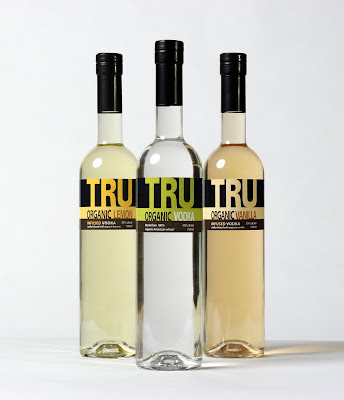 Is Vodka leading the the way for green alcohols? Just when I finished reviewing 360 Vodka, a very ecofriendly vodka, I read a news item about another ecofriendly vodka that will soon be on the market.

Modern Spirits is launching TRU, their own line of organic vodkas made from American wheat. I previously posted about the infused vodkas that they make, including their Rose Petal Artisan Vodka. Though the infused vodkas sounded interesting, they were pricey, about $24.99 for 375ml bottles and $43.99 for 750ml bottles. There will be three different flavors of TRU, Straight, Lemon and Vanilla.

For the TRU, their wheat is USDA certified organic and free of chemicals from field to bottle. The vodka is distilled through state-of-the art column stills that are supposed to produce the purest spirits possible in only one pass, saving energy. The vodka is then filtered through activated charcoal, said to be the most efficient filtering medium and combined with vapor-distilled water. TRU will come in 100% recycled, recyclable or biodegradable packaging. The bottles, weighing 620 grams, will use 25% less glass than the average vodka bottle. Even their marketing materials will try to be green.

In addition, Modern Spirits will plant a tree for every bottle sold. Through organizations such as Sustainable Harvest International, trees will be planted in tropical zones. Planting trees is not without controversy, some claiming it is not as effective as other methods. Though much depends on what types of trees are planted, where they are planted, etc.

TRU will enter the market around April 1, though only in six states, including Arizona, California, Florida, Massachusetts, New Jersey and New York. So, we will be able to find them locally through Martignetti Companies. Interestingly, the price should be $34.99 for 750ml, which is less expensive than their other vodkas. I am interested to see whether the taste of this vodka is as good as the 360 Vodka.

Wine producers should also pay careful attention to the ecofriendly methods these vodka producers are using.
Posted by Richard Auffrey at 6:00 AM