2005 has been hailed as an excellent year for Bordeaux and Burgundy, and many of the wines are just starting to hit the market. Prices are generally high though you can find some bargains as well, especially from wineries that are currently under the radar. So I was excited when the Lower Falls Wine Co. announced they would be holding a tasting of some 2005 Burgundies from two domaines who are up and coming.

Yesterday, I attended that tasting where they showcased thirteen wines from the domaines of Cecile Tremblay and Roblet-Monnot. These two wine makers are married and are considered to be promising new talents in Burgundy. Tremblay is garnering praise for her work in the Cote de Nuits, while Roblet-Monnot is garnering praise in the Cotes de Beaune. The bond between the domaines is clear in their shared commitment to painstaking hands-on vineyard management and the conversion to biodynamic practices. They do not believe in the use of too much oak (nothing over 50% except for the Grand Crus), and none of the wines are fined or filtered.

Cécile Tremblay is the grand-niece of the legendary and recently deceased Henri Jayer and her holdings of vines in the Côtes de Nuits all come from the Jayer family. As I am emphasizing women in wine this month, let me give a special shout-out to Tremblay.

Both domaines produce only limited quantities of their wines, numbering in the hundreds of cases for each. Lower Falls Wine Co. is the only wine store in Massachusetts that possesses their wines for sale. And in fact, the 2005 Cécile Tremblay Chapelle-Chambertin Grand Cru is already sold out. I don't think the rest will last too long either based on all the people at the tasting who were buying the wines.

These Burgundies are all still very young. They really need at least 5-10 years of cellaring to reach their prime. So what you taste now is more of their potential, although some of them could be drank now if you really wanted to do so. Though if you are seeking 2005 Burgundy to drink now, you might be better off finding less expensive ones, those more made to be ready now. If you are willing to be patient though, then you won't go wrong with these Burgundies.

What impressed me with these Burgundies, which helps show their potential, was their balance. There was nothing discordant in their taste, no element that seemed out of place. Every aspect of the wine was in its proper place and should only improve in time. Plus, there was plenty of delicious fruit in these wines. It certainly makes it harder to wait for these wines. 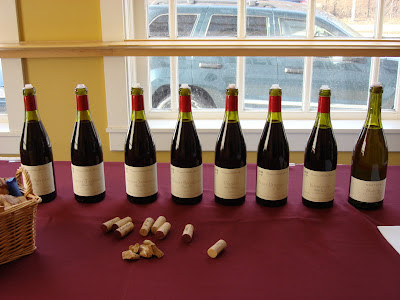 All of these wines were generally light red in color, though some of the more expensive wines seemed to be a shade darker. The initial few wines also had more of a fruity nose, though subdued, while the latter wines seemed to acquire a hint of earthiness in the nose. Though some felt tight, it was a looser feeling and not like they were totally closed. So you did get a feel for their flavors, their structure. The finishes were generally long and satisfying. None of them presented anything which turned me off. They were all excellent wines, yet with their differences.

The Volnay Saint Francois really appealed to me because of its very juicy fruit flavors, such vibrant flavors of cherry, raspberry and maybe strawberry. Its lingering finish also was quite satisfying. The Volnay Brouillards Premier Cru on the other hand presented darker fruiter, more black cherry and plum flavors mixed with a hint of earthiness. A more primal wine which also appealed to me. Yes, I have eclectic tastes. The Volnay Taillepieds Premier Cru was just amazing, adding a touch of clove and spice to the sweet fruit and hint of earthiness. This is a wine that truly impresses with its complexity and finish. Yet the Pommard Arvelets Premier Cru did not disappoint, maybe being the most powerful and muscular of the wines.

Roblet-Monnot also produced the one white of the tasting, the 2005 Nerthus Chardonnay de Bourgogne. I liked the nose, crisp fruit, but on the palate it was tart, like grapefruit. Chardonnay is not one of my favorite wines so this did not thrill me. But, for fans of the grape, you might enjoy. 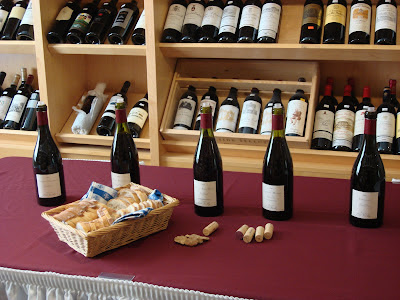 Like the Roblet-Monnot wines, the Tremblay wines were generally light red in color, though some of the more expensive wines seemed to be a shade darker. All of the Tremblay wines though had some earthiness in the nose. Overall, the fruit flavors were bolder, more dark berry and plum flavors. The finishes were also long and satisfying. None of them presented anything which turned me off. These were all excellent wines, yet with their differences, just like the Roblet-Monnot wines.

I very much enjoyed the Morey Saint-Denis which has an excellent mix of dark fruit and mild earthiness. It had plenty of complexity and a satisfying finish. The Vosne Romanee Vieilles Vignes was similar to the Morey yet one step up, a grade better than the Morey. The Echezeaux Grand Cru though really blew me away. It was a more subdued wine, silky smooth, incredible flavors, lots of complexity, and a very long finish. Maybe my favorite wine of the tasting.

Overall, this was a superb tasting. As I have said before, Lower Falls Wine Co. runs some very high quality tastings. Everyone one of the red Burgundies was pleasing. It is only a matter of individual taste which you might prefer. You would not go wrong with any of them. I did pick up several different bottles and will tuck them away into my wine cellar to sit for several years.

The tasting ran very smoothly. They chose to hold the tasting in two different rooms which alleviated that crowded feeling that you sometimes get at popular tastings. And as I was at the store early, checking out what other new wines they had, I did get to see their frenetic efforts to set up this tasting within a short period of time. And they succeeded.

I should also mention that I found another intriguing wine there while perusing the racks. This was the 2004 Librandi “Efeso” Val di Neto Bianco ($31.99), which is made from the Mantonico grape, one that is new to me. As I love checking out new grapes, and as it came recommended as well, I bought a bottle to try and of course will report back once I have tasted it.

Wow! a very nice article.Really i want your appreciates which have good wine testing of Burgundy tasting review.