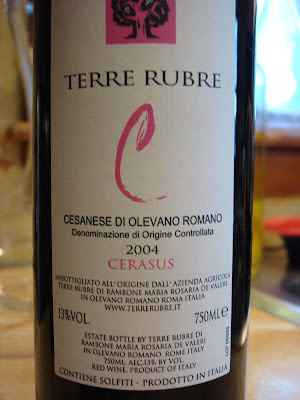 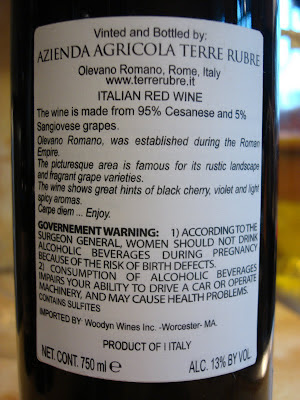 Why let a grape variety die out? Should we not attempt to cultivate as many grapes as possible, especially indigenous grapes with a lengthy history? Especially grapes that make a delicious wine?

Last night, I opened one of the new wines I bought at the Farfalle Italian Market. I chose Italian wines made from more unusual grapes, grapes I had not tasted before. I love the adventure of trying such a new wine. You never known what you might find, what a treasure you might never had known about otherwise.

The 2004 Terre Rubre Cerasus ($16.99) is made in the Lazio region of Italy, in the same region as Rome. Lazio sits on the west coast of Italy and has 26 DOCs. Terre Rubre is located in the DOC of Cesanese di Olevano Romano, southeast of Rome. Most Lazio wines are white though red are starting to increase in popularity. Terre Rubre cultivates primarily Cesanese Comune and Cesanese D'Affile with small plots of Montepulciano, Sangiovese and Ottonese.

I had never had Cesanese before. It is an old grape but relatively rare now and found in the Lazio region. There are two varieties, Cesanese Comune and Cesanese D'Affile. The Comune is the larger berried version and is also known as Bonvino Nero. For a time, most Cesanese wines were made frizzante, like Lambrusco. But, more still wines are now being made with Cesanese. Still, it is a grape that is waning and unless some producers make efforts to continue to cultivate it, its fate may not be good.

The 2004 Terre Rubre Cerasus is made of 95% Cesanese Comune and 5% Sangiovese. It has an alcohol content of 13%. The wine is a darker red though with some translucency. It has a nice nose of dark fruits reminiscent of black cherries and plums. In my mouth, the wine began with a rush of subdued dark berries, a delicious mouth of fruit that did not overwhelm. Yet the finish transformed, with more acidity, spice notes and a touch of rusticness. It was a different transformation that intrigued me. And the finish lingered for a good length of time. I had the wine with my corned beef and they seemed to go together ok. The wine mellowed a bit more with food.

This was a bit of a different wine, and it is hard to pinpoint some of the reasons for it. But it certainly was enjoyable and I would recommend it as a Drink & Buy. We finished the bottle with dinner so obviously liked it very much. Why not give it a try and learn about a rare grape.
Posted by Richard Auffrey at 6:22 AM