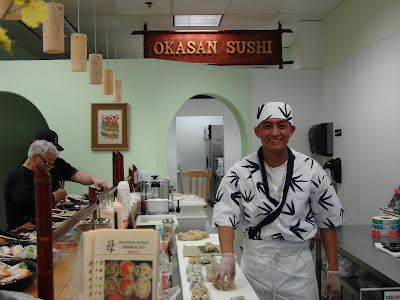 Sometimes you just get lucky.

Last Thursday, I was going to a wine tasting at OurGlass Wine Co. in Saugus. I had arrived there a bit early as I was planning on getting a bit to eat at the North End Cafe, an Italian place I enjoy. But when I arrived at the shopping area, a new place had just opened, Okasan Sushi.

They had not officially opened yet. But they were having a grand opening celebration, which included Free Sushi! Below you can see all the sushi that was available, both nigiri and maki rolls. You could eat all you wanted. I quickly entered the restaurant and began to dig into the nigiri. 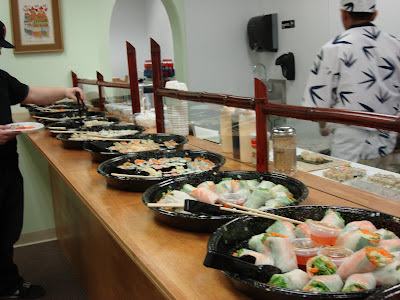 The restaurant was started by Kevin and Aaron, who used to work at the Wild Oats Sushi Bar. Kevin is in the picture at the top of the post, as well as the picture below. They sell basically only sushi, except for some salad and soup. Their prices are cheap, generally $0.90 to $1.25 per piece of Nigiri and $2-$3 for 4 Maki pieces. They have a decent selection of the usual sushi, though nothing really exotic. That could change in time though the longer they are open.

The sushi is good, especially for the price. It is not high-end sushi, but is fresh and tastes good. And it is cheap so you can definitely enjoy lots of sushi for little money. It would especially be good if you are having a party and need plenty of sushi. They have plenty of vegetarian options as well. 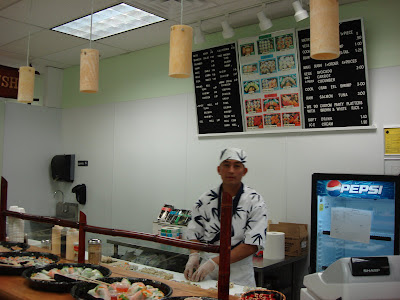 I will return here for when they are officially open but I certainly got lucky to arrive when they were giving away all the free sushi. I will report back as usual. If you are looking for good, cheap sushi, then why not stop by.

Posted by Richard Auffrey at 6:03 PM