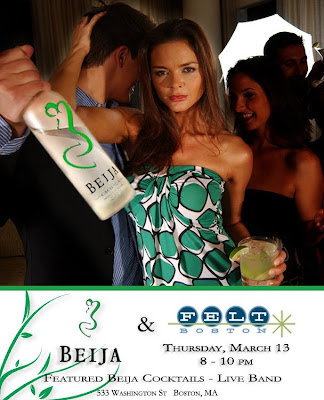 I previously raved about Beija, a new Brazilian Cachaca, also known as a virgin cane rum. It is a new liquor on the market and I think it is great just on the rocks or mixed in any number of cocktails.

You can once again sample this new liquor at a party that is being hosted by Beija at Felt on Thursday, March 13, from 8-10 pm. It is open invitation, so feel free to bring friends. There is no guest list. There will be featured Beija cocktails and a live band.
Posted by Richard Auffrey at 6:15 AM