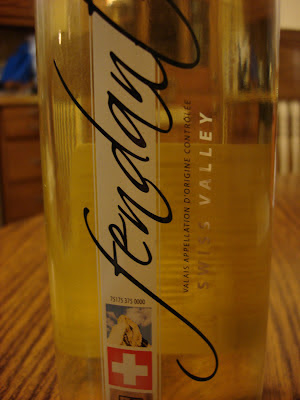 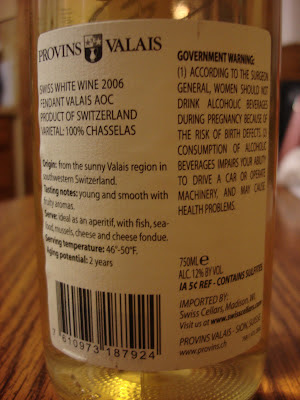 This is the final one of my recently purchased wines from Switzerland.

The most planted white grape in Switzerland is Chasselas, which is also planed in Chile, France, Germany, Hungary, and the Ukraine. In Switzerland, it may also be known as Fendant or Perlan. Its origins are said to extend back to ancient Egypt. In some places, Chasselas has a poor reputation for making boring wines. But when it is produced in certain areas of Switzerland, it acquires interesting mineral notes with a crisp acidity. It is said to well reflect its terroir. It is also usually aged in stainless steel rather than oak.

I was not familiar with Chasselas before so was intrigued to try a new varietal. The 2006 Provins Fendant du Valais ($15.99) is from the Valais region in southwestern Switzerland. It has an alcohol content of 12% and was a light yellow in color with a mild nose of citrus. On the palate, it was crisp with flavors of pear and peach with a pronounced minerality, especially on the finish. There was also an elusive fruit flavor in the mix, something that I could not identify yet seemed vaguely familiar as well. It did not seem one of the usual fruity suspects. The wine certainly had its own unique character and I enjoyed it. I drank the wine with some chicken and noodles and it was a good food wine.

Now, of the three Swiss wines I recently tasted, two of the three were Drink & Buy Recommendations. The third just seemed too pricey for what you got. That means I definitely will seek out other Swiss wines to try and I hope that you give them a chance as well.
Posted by Richard Auffrey at 6:05 AM

Thanks for talking like tis about the fendant, which I really like as aperitive or associate with cheese. In Switzerland and more specificaly in Valais we produce wine with more than 54 different type of grapes. A wonderful country

I definitely would like to taste more Swiss wines and will keep my eye out for others at my local wine stores. Switzerland just needs to export more of their wines. :)