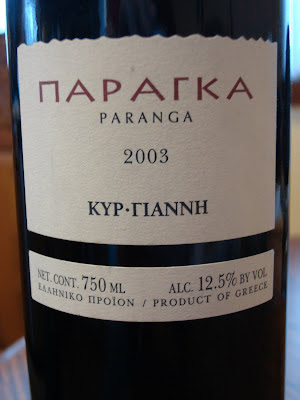 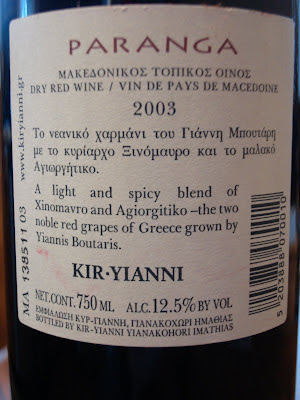 I have noticed that Greek wines get very little attention in most wine blogs. Why is that so? Greeks certainly are not newcomers to the wine industry. They have a rich wine history, with many different indigenous grapes. They can be difficult to locate in many local wine stores, rarely more than a handful available.

While at the recent class on French Rhone wines, a comparison was drawn between those wines and Greek wines. So, that put me in the mood to open one of the Greek wines in my cellar. I'll admit I dont own many Greek wines, though out of lack of availability and not out of interest. It is hard to find Greek wines around my locale.

I believe I found the 2003 Kir-Yianni Paranga ($18) at the Grapevine Travelers in Medford. Kir-Yianni, which means "Sir John" in Greek, was founded in 1997 as a premium spin-off of the Boutari Group. Though the first vintage was 1990, it was not until the 1995 vintage that the wine was bottled under the Kir-Yianni name. More than half of their labels are single vineyard growths on the eastern and western slopes of Mt. Vermio in Macedonia. They grow indigenous Greek grapes as well as some international ones such as Syrah and Sauvignon Blanc.

The Paranga is a Vin de Pays de Macedoine and is a red blend. Curiously, the label on the bottle says it is a blend of Xinomavro and Agiorgitiko, two indigenous Greek grapes. Xinomavro, also spelled Xynomavro, bears some similarities to Pinot Noir while Agiorgitiko bears some similarities to Merlot. But, on their website, it states the wine is a blend of Xinomavro, Merlot, and Syrah. It is possible that they make a couple versions of the Paranga for different markets. The wine label also states it has an alcohol content of 12.5% but the website claims it is 12.7%. I'll stick to the wine label.

This wine has light red in color with a nose of bright red fruits with a bit of spice, maybe a touch of cinnamon. As you taste the wine, you first get a rush of vibrant fruitiness, some cherry and raspberry but that then transforms into a drier, lightly spiced finish. The spicy flavors are not bold, but are more subtle. It feels more like a light bodied wine and is very easy-drinking. It certainly has its own unique character as it will taste different to you, not like most wines you might have had before. The wine intrigues you, drawing you in, until the bottle is finished. A very enjoyable wine. I drank this wine with some buffalo hot-dogs and it went well with the lightly spiced meat.

A definite Drink & Buy recommendation, and a good introduction to Greek wines.
Posted by Richard Auffrey at 6:19 AM