Though I knew fish was good for your health, I did not know the true extent of its health benefits, especially for your heart. I am not sure many people really understand that extent. Fortunately, I recently attended an event which provided me some fascinating information concerning the health benefits of fish and Omega-3s. In short, most of us should be eating more seafood.

“For The Health Of It,” was a seminar and salmon tasting organized by Oldways Preservation Trust, a Boston-based "non-profit food issues think tank.” They are the creators of the Mediterranean Foods Alliance, the Whole Grains Council, and the Latino Nutrition Coalition. Oldways was created to "advocate a return to healthy, traditional old ways of eating." They also organize various educational events "about healthy eating, drinking, lifestyle and the traditional pleasures of the table."

The salmon seminar was held at the elegant Harvard Faculty Club, and the audience included a variety of individuals, from writers to seafood distributors. I will go into further detail about this event in another post tomorrow, as I want to concentrate this post on a specific issue, the health benefits of fish. 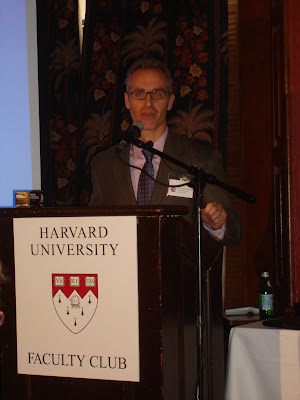 One of the first speakers at this event was Dariush Mozaffarian, M.D. Dr.P.H., an Assistant Professor in the Department of Epidemiology and Nutrition at the Harvard School of Public Health. He is also part of the Division of Cardiovascular Medicine, Brigham and Women’s Hospital and Harvard Medical School. He is a cardiologist and has been studying nutrition for about ten years.

Research has been providing growing evidence of the health benefits of fish, for the heart, brain, and bones as well as against cancers and inflammatory diseases. But some of the strongest evidence is for its significant benefits to preventing heart disease. Fish contains Omega-3s, fatty acids included eicosapentaenoic acid (EPA) and docosahexaenoic acid (DHA). Those polyunsaturated fats have been proven to significantly reduce the risk of cardiovascular death. In fact, this is the only dietary factor where there is clear proof that it can reduce cardio-related deaths.

Consider that a daily intake of 250mg of EPA and DHA will reduce our risk of cardio-related death by one-third, which is greater than the effect of statins. This amount would be equivalent to about two servings a week of wild salmon. Omega-3s are the first line of defense for cardiovascular health. They are also very important to the brain development of infants and pregnant women should eat fish.

Now what about concerns of mercury, PCBs and Dioxins in fish? In short, worries about those matters are needless. They do not pose a significant threat, and the health benefits of Omega-3s far outweigh any risks. Dr. Mozaffarian stated the general public should not have any concerns about mercury unless you are eating fish five times a week or more.

As for pregnant or nursing moms, they do have to be a little more careful but still should eat fish to garner the substantial benefits of Omega-3s. He recommended they should eat up to 12 ounces a week of a variety of seafood, including up to 6 ounces of albacore tuna. They should though avoid the four fish that have the highest mercury levels: shark, swordfish, king mackerel, and tilefish. Plus, they should check local advisories for any fish caught by family and friends. This is all supported by the FDA and the American Heart Association.

PCBs and Dioxins also do not pose a significant threat. PCBs were outlawed in 1977 and Dioxin emissions have been reduced by 90% since 1987. There was a study on salmon intake that showed increased deaths due to PCBs and Dioxins, yet it was based on 7 servings of wild salmon or 3 servings of farmed salmon per week, for seventy years. Plus, the added amount of deaths was 24 for wild salmon and 8 for farmed salmon. It failed to consider though the amount of cardio deaths that would be prevented due to the Omega-3s in the salmon. In fact, 7125 deaths would be prevented, making the added deaths very insignificant, the benefits far outweighing any risks. Plus, there are more PCBs and Dioxins in beef, chicken, pork, dairy and vegetables than in seafood. Once again, the FDA supports these conclusions.

In general, farmed salmon has the great amount of EPA and DHA, over 2.5 grams per 3.5 ounce serving while wild salmon has just over 1 gram. Anchovies and Atlantic herring are high in EPA and DHA too, both with over 2 grams. Fish from specific areas may contain more or less EPA & DHA. For example, wild Yukon Keta salmon actually possesses up to 5.2 grams, which makes it even better than farmed salmon.

The conclusion is obvious, eat more fish! The health benefits of Omega-3s are significant, especially in the prevention of cardio-related deaths. The benefits far outweigh any risks from mercury, PCBs and dioxins. One of your best fish options, for the highest levels of EPA and DHA, is salmon, especially wild Yukon Keta salmon.

It bears repeating: Eat More Fish!
Posted by Richard Auffrey at 6:00 AM

Wild game has lots of omega-3’s, as does grassfed beef and dairy products. Any animal with plants at the beginning of its food chain (and not the grains we feed factory-farmed animals today) is rich in omega-3. Of course the cheapest and easiest thing to do is just take fish oil pills. Omega-3’s are also supposed to be good for inflammatory pain, depression and some other psychiatric problems.

Also in the category of it-just-seems-to-cure-everything is vitamin D-3. The modern lifestyle deprives most people of this nutrient and unlike omega-3 you can’t get enough of it by following a scrupulous diet.

Thanks very much for the additional info. Do you know which wild game has the most Omega-3s?

Good question, I don’t know. Venison is often mentioned as a good source (makes sense, deer eat lots of leafy green stuff). Of course that applies only to wild venison and not the farmed kind.

This is an area that probably needs a little investigative reporting. For example, I’ve heard suggestions that goat and lamb from New Zealand and elsewhere are generally grass-fed, but I’m not sure where the real truth lies. And of course, if the grass-fed meat is “finished” in a feed lot, then much of the nutritional benefits disappear.

You see what I mean, supplements are soo much easier. :)

Thanks, maybe I will do a little research and see what I can find.