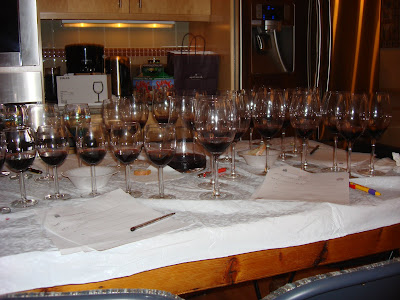 If you do a number of group wine tastings, you'll quickly realize how different people's preferences can be. The same wine can be lauded by some but slammed by others. That is part of the fun of wine, how the experience can vary so much from person to person. It may be even more pronounced in a blind wine tasting, when the tasters have much less information about the wine they are drinking.

I had the great pleasure to attend a blind tasting at the home of Adam, the writer of WineZag, who I also recently praised. There were seventeen of us there, including some people I already knew, such as Dale and Amanda, and plenty of others, very nice people, that I met for the first time. It was a jovial atmosphere, with plenty of cheese, bread, meats, dips and more to snack upon while tasting.

We blind tasted 14 wines, all 2007 Southern Rhones, with many being Chateauneuf du Papes. The wines ranged in price from $13-$70, and had earned Wine Advocate scores of 89-98. We had a sheet listing the name, price, and scores of the wines, but we had no clue as to which wines were in our glasses. So we had some basic information about the wine, such as the country, general region and basic types of grapes, but we lacked specifics. Certainly a fun challenge for any wine lover, and much more difficult than you might realize.

After tasting through the line-up, writing down our thoughts on each glass, we chose our top three wines of the evening. Those selections were then tabulated together to determine the overall winners for the evening. A wine received three points for a #1 choice, two points for #2 and one point for #3. Fortunately, there was no contest to see if we could specifically identify the wines, which certainly would have been formidable, as well as humbling.
When you are blind tasting, I think you might be paying a bit more attention to all of the nuances of the wine, trying to ascertain any clues as to the wine's identity. You cannot be worried about being wrong in your assessements. You just have to have fun, and realize that everyone else is essentially in the same boat as you. No matter how much of a wine guru you may think you are, a blind tasting will show you how much you still have to learn. So drop the pretenses and just enjoy!

My personal #1 wine ended up being the Roger Sabon Cuvee Reserve ($35, 92 points) and my #2 wine was the Roger Sabon Le Olivets ($30, 90 points). That is interesting in that these were the only two wines from the same producer. I don't recall ever having tasted these wines before, but they certainly stood out to me at the tasting. It was the entirety of these two wines that enthralled me, their complexity, taste, nose, finish, and more. Everything came together to create a compelling wine. I will be seeking out wines from this producer now. My #3 wine was the Les Cailloux Brunel ($45, 93 points). Coincidentally, my wife chose the same three wines, in the same order.

For the group's overall #1 winner, there was a landslide vote, of 35 points, for the Roger Sabon Cuvee Reserve ($35, 92 points). So, it certainly satisified many palates. The overall #2 wine only garnered 7 points, which is so low, and close to what several other wines earned, that it is essentially a dead heat. The best thing to say is that preferences really varied on all of the other wines besides the #1 winner. So if you are looking for a crowd pleaser, you won't go wrong with the Roger Sabon, and it is a good value at its price.
Interestingly, the Clos du Mont-Olivet La Cuvee du Papet ($68, 98 points), did very poorly, and many people criticized it harshly during the tasting. I felt it had a very sour, offputting taste to it which overshadowed any other attributes it possessed. Frankly, I felt it was one of the worst ones of the night. The other more expensive and high scoring wines did better than the Clos, but none shined forth to the group.
What an enjoyable evening all around. Old and new friends, lots of wine and food, interesting conversation. Plus a challenge, a blind tasting. So what are you waiting for? Gather together some wine lovers, buy some wine and food, and set up your own blind tasting. I'll be eagerly looking forward to Adam's next event.
Posted by Richard Auffrey at 6:30 PM