A Wine Luncheon at Market

Chef Jean-Georges Vongerichten has an excellent reputation, and has amassed a culinary empire of restaurants, including a 3 Michelin star New York restaurant, across the globe. In Boston, he opened Market by Jean-Georges Vongerichten in the W Hotel. The menu "reinvents classic dishes with eclectic flair, allowing guests to try new flavor combinations and explore spices from other regions, all while remaining close to home." The dishes also rely on "seasonal market ingredients and local fish."

Recently, I attended a luncheon there, hosted by Pasternak Wine Imports, which was intended to showcase the wines of Guy Saget. Though we had a set menu, it appears that all of our courses were part of their regular menu. Though I enjoyed the food, none of it really impressed me as anything special. It did not seem really different from what you could get many other places. I expected much more, especially considering the reputation of Jean-Georges. The food did not make me want to rush back to the restaurant. 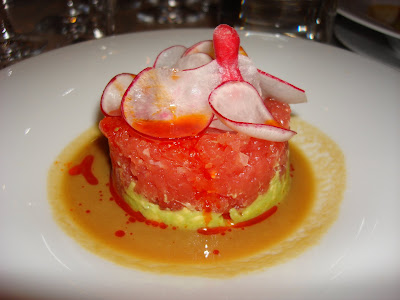 Our first course was Tuna Tartare ($15) with avocado, spicy radish, and a ginger dressing. The tuna was silky smooth, plentiful and tasty, especially with the ginger dressing. I enjoyed it but tuna tartare is a common dish in many restaurants, and this did not stand out as especially different. 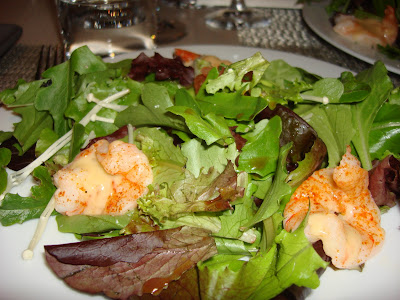 We moved onto a Steamed Shrimp Salad ($13) with tender Greens, avocado, and champagne dressing. Avocado again? That did not seem necessary. There was almost no dressing on the greens, and someone else had to ask for an extra dish of dressing. The shrimp were very good but were not enough to make this salad compelling. 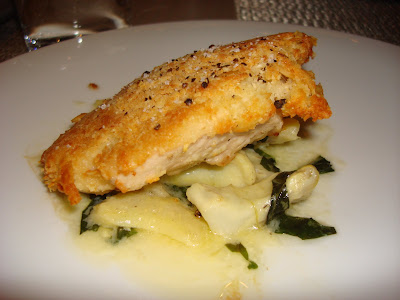 The main entree was Parmesan Crusted Organic Chicken ($19) with artichokes and lemon-basil butter. Another good, but not great dish. The chicken could have been moister, like the one I previously had at L'Espalier. The lemon flavor was also a bit too strong. It is not a dish I would order if I returned. 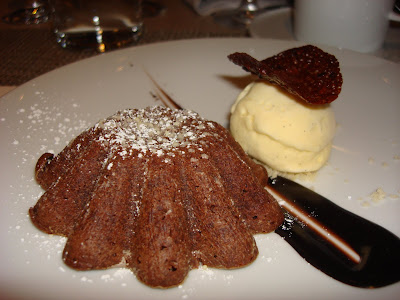 Dessert was a Warm Chocolate Cake ($8) with vanilla ice cream. Tasty but ordinary. So many restaurants serve a similar chocolate cake.

Where is that creativity I crave? With so many restaurants in Boston, I don't think good but ordinary is especially compelling.

Posted by Richard Auffrey at 5:59 AM

I'm surprised at how ordinary everything appears. I would definitely expect more from a Jean-George restaurant based on what I've read about him.

This is your review of a wine event? Notice anything missing?
A mention of the wine perhaps?

GP,
The wine received its own post on the same day as this review of the restaurant.