As I mentioned yesterday, I recently attended “For The Health Of It,” a seminar and salmon tasting organized by Oldways Preservation Trust, a Boston-based "non-profit food issues think tank.” I concentrated yesterday on the health benefits of fish and today's post will discuss the rest of the fascinating and delicious event.

We began with a salmon tasting, including some superb smoked salmon. The salmon was moist, flavorful, and quite delicious. Different peoples in the Yukon area use varied woods when they smoke salmon, providing a different flavor profile to their products. I thus started off in a very good mood, pleased with the salmon.

There were then some brief opening remarks, including an interesting item about the history of salmon consumption. Most people are familiar with the famous Lascaux cave paintings in France. These Paleolithic images depict horses, stags, cattle, people and more. These caves though are located by a river known for salmon. In this area, middens, basically dumps for waste, have been found filled with 20-30 feet of salmon bones. Thus, salmon consumption has a long and ancient history. 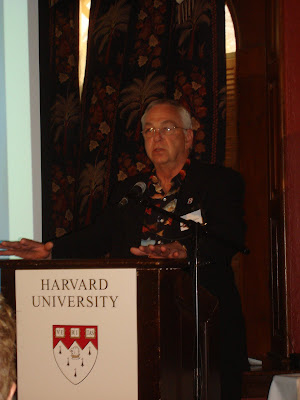 After the lecture by Dr. Mozaffarian, the next speaker was Jack Schultheis, the General Manager of Kwik’pak Fisheries. Kwik’pak was formed in 2002 to protect and support the local communities, six villages, and fisheries of this remote region.

All of these fisheries are sustainable, certified by the Marine Stewardship Council. Kwik'pak is also a member of the Fair Trade Federation, the only seafood company with that distinction. In addition, Kwik'pak has a state-of-art processing plant in the village of Emmonak, so they can ensure the fish they ship is as fresh as possible.

The Yukon River is huge, about 2200 miles long, and at the delta, there are a number of small villages, home to Siberian Yupiks. They might be the oldest inhabitants of North America and originally settled here due to all the available food. The Yupik communities are small, family oriented. Families go fishing on 22-foot skiffs, so these are not large commercial fishermen. There are only about 700 family fishing permits in this are. Though 160-200 million salmon are caught each year in Alaska, only about 1 million are caught in the lower Yukon region.

The salmon they catch are primarily chum, also known as dog salmon or Keta salmon. Kwik'pak appears to be referring to them as mostly as Keta, likely as it sounds better than chum or dog. These Yukon salmon travel great distances, up to 2000 miles or more, from the Bering Sea to their spawning grounds in British Columbia. Interestingly, once the salmon reach the Yukon, they stop eating until they reach the spawning grounds. They load up on food before getting to the river, thus their bodies are stuffed with beneficial oils. The Yupik catch the salmon just as they enter the Yukon, when they are at their fattest. 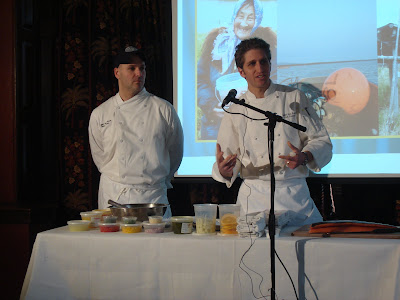 There was then a cooking demonstration by Chefs Jeff Tenner and Pete Doire of Legal Sea Foods. As they could not cook here, they just showed us how they would prepare a couple dishes, including Brown Bag Salmon and Salmon Ceviche. We also received copies of the recipes so we could replicate them at home. The ceviche looked especially compelling. 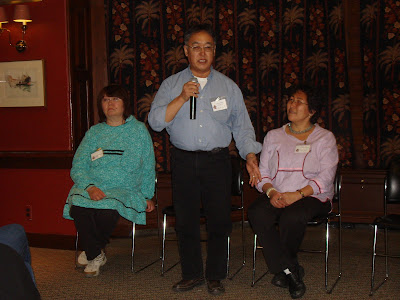 Next up, there was a moderated Q&A with a few Yupik, including Ellen and Humphrey Keyes, and Matilda Oktoyuk. The Yupik live in the villages of Emmonak, Alakanuk, Grayling, Kotlik, Nunam Iqua and Mountain Village. Their motto is "We live to fish and fish to live." They largely live off the land, hunting, fishing and gathering. It is a hard life but Ellen, Humphrey and Matilda all seemed very happy with their lives, content with their existence. They really had no complaints. They were down-to-earth, humble and pleasant people.

Salmon is very important to their lives, and salmon season begins in June. This is almost the start of summer for the Yupik, as their cold weather continues into May. But the season lasts for only about six weeks, when the weather permits their small skiffs to safely traverse the waters. During that time period, they need to catch enough salmon to last them year round. On an average fishing day, a boat will bring in 200-300 fish.

The event finished up with more salmon tasting, good-sized pieces of moist fish with four different sauces. The blueberry sauce really was good, and went very well with the salmon.

Overall, this was a very compelling and informative event. Kwik'pak Fisheries is the type of company you should support, as it provides a sustainable and delicious product as well as helping a worthy community, the Yupik. Plus, the health benefits of the Yukon Keta salmon are enormous, and make it even more of an attractive product. The salmon will be available in the Boston area probably some time in June, and I highly recommend you check it out. It may be a bit pricier than other salmons, but I think it is well worth the added cost.

I will certainly seek out this salmon when it becomes available here.
Posted by Richard Auffrey at 6:00 AM