The Animal That Loves Saké

Which animal allegedly loves Saké but purchases it with fake money?

In the photo above, the animal that resembles a raccoon is a Tanuki. In Japanese folklore, Tanuki are mischievous shape-shifters with supernatural powers. They can transform into anything, whether living or inanimate, but their usual forms are monks and tea kettles. Supposedly, they place special leaves on their heads and chant before they can transform themselves into a different form. Some legends claim the leaves are from the sacred lotus plant of Buddhism.

Besides their shape-shifting ability, they can also cast powerful illusions on other items. For example, they can make leaves appear to be money, or even make dung look like delicious food. So definitely beware if dining with a Tanuki. As Tanuki most often inhabit forests and wooded area, their main targets for their mischieveous pranks are hunters and woodsmen. But they could play tricks on anyone entering their territory.

Tanuki statues, like above, are very common in Japan, especially outside restaurants and bars, where they beckon to people to enter those establishments. These Tanuki are most often depicted with a large stomach, over-sized testicles, a straw hat, a flask of Saké and a promissory note. Tanuki are supposed to love Saké and in the legends that often buy it with fake money, leaves they have cast an illusion upon.

The Tanuki is also considered a sign of good luck, and possesses eight traits that reflect this fact. On the Saké bottle they carry is often written the Hatchi symbol, which means "eight." The eight traits include: a hat to protect against trouble or bad weather; big eyes to see what is around them and help make wise decisions; a Saké bottle that represents virtue; a big tail that provides steadiness and strength; over-sized testicles that symbolize financial luck; a promissory note representing trust and confidence; a big belly symbolizing bold and calm decisiveness and a friendly smile. 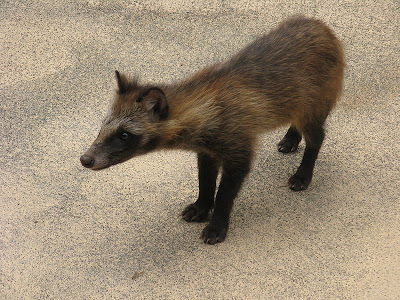 The Tanuki is more than just a legend. It is actually a real animal, but it is not a raccoon or badger. It is a type of dog that can grow to up to 60cm in length and has distinctive stripes of black fur under its eyes. Tanuki are native to Japan, southeastern Siberia and Manchuria, and they live in the lowlands, forests and mountain valleys. They probably though don't really drink Saké.
Posted by Richard Auffrey at 6:00 AM

Don't know if you know, but there's a film by the director of 'Spirited Away' all about Tanuki. It's called "Pom Poko". Had watched it several years ago, but it wasn't until I read your article that I realized half of what that film was about lol