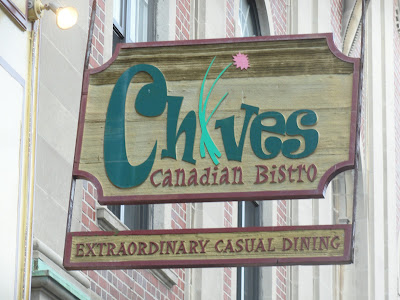 I love how Twitter can connect people from all over the world. Recently on Twitter, I was contacted by George Davis, the General Manager of Chives Canadian Bistro in Halifax, Nova Scotia. George was making plans to visiting Boston in September and wanted some recommendations. This was days before I was to leave for a visit to Nova Scotia. I checked out the website for his restaurant and was intrigued by its philosophy and menu. I had been seeking a place to dine in Halifax and had not previously checked out this place. In the end, I made reservations to dine there during my trip.

Chef Craig Flinn opened Chives in December 2001 and since then it has gained quite an excellent reputation. For example, the Coast City Guide: Best of Halifax 2012, an annual guide, awarded Chives a Gold as Best Fine Dining, a Gold to Chef Flinn as Best Chef, and a Gold to Chives for Best Use of Local Ingredients. The Chives website states: "The restaurant menus are based on seasonal produce from local farmers, artisan cheese and meat producers, and sustainable seafood with the core menu changing every 6 to 8 weeks. The bistro’s clientele enjoy contemporary Canadian bistro dishes rooted in European culinary history." 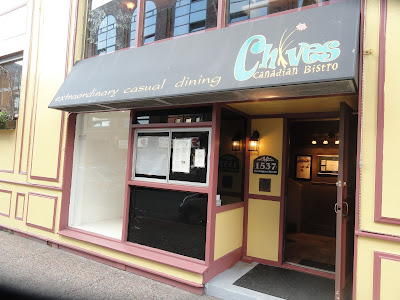 The medium-sized restaurant is casual but with an intimate feel, and the decor evokes a sense of nature, from its colors to the unique tree sculpture near one wall. There is a bar in the main dining area but it is not a place to sit, but rather a place for their bartender to work and servers to pick up drinks. On some of the walls were a series of rather unique paintings, old buildings that lacked any windows. The tables are spaced far enough apart so you don't feel crowded and have an element of privacy. You will feel very comfortable here, a place for an intimate dinner or a get together with some friends. 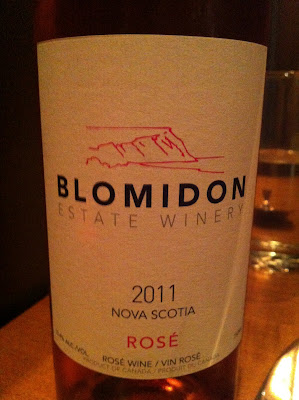 Chives emphasizes local ingredients and has not failed to follow through with this philosophy on their wine list. Though their wine list contains wines from all over the world, they also sell seven Nova Scotia wines by the glass and fifteen by the bottle. Plus, they sell about 9 other wines from other parts of Canada. Glasses are available in either 5 ounce ($7.25-$10.75) or 9 ounce ($13.25-$19.50) pours, and the list has a fair-sized selection of wines priced $36-$60 a bottle. Markups seem fairly reasonable, with a number of bottles priced under 2X the usual retail price. For example, the 2008 Caymus Cabernet Sauvignon, often found at retail for about $75, only costs $110. Wine lovers will fine plenty of wines to interest them on this list.

We decided to stick to Nova Scotia wines, to get a small sense of the current state of their wine industry. I have had Nova Scotia wines before, and even visited a few of their wineries, but it has been a number of years since my last experience. Since then, new wineries have opened and I figured that the overall quality of their wines had likely improved as well. Based on the five wines we tasted, I was impressed and think a deeper exploration of their wines is warranted.

My favorite of the wines was the 2011 Blomidon Estate Rose, of which I have previously raved. It was an excellent food wine and something I could easily enjoy on its own as well. The Benjamin Bridge Nova 7 was a pleasant apertif, a sparkling wine made from New York Muscat and Pearl of Csaba grapes. It has intense aromatics, reminiscent of Muscat, with delightful green apple, orange and melon flavors. Crisp acidity, hints of sweetness and a light effervescence make this a fun and delicious wine.

The Avondale Sky The Landing is made from the Leon Millot grape and is an opaque red, almost purple, in color. It is easy drinking with intense cherry flavors and hints of spice, especially on the finish. Not too complex, but a very pleasant wine. The Jost Vineyard Cote St. George is made from the Marechal Foch grape and was light and smoky with subtle red fruit flavors. This would be delicious with some BBQ or a hearty pasta dish.
And if you don't like wine, they have a fully stocked bar with a list of special cocktails ($8.25) and martinis ($10). 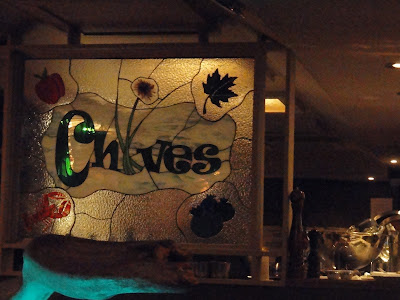 The food menu is small, based on seasonal and local ingredients, but with plenty of interesting choices. They usually have 7 Appetizers ($8.99-$12.99), 7 Entrees ($23.99-$28.99) and 4 Desserts ($4.99-$9.99). The size of the menu is not a negative in the least. I also like the fact that they provide 2 wine recommendations for each dish on the menu, making it much easier for customers to decide on a pairing. Besides the regular menu, there will usually be at least a few specials of the evening too. The menu includes vegetarian options, gluten free choices, as well as noting which menu items can be modified to gluten free. In addition, I suspect that if you have food allergies, they will cater very well to you. 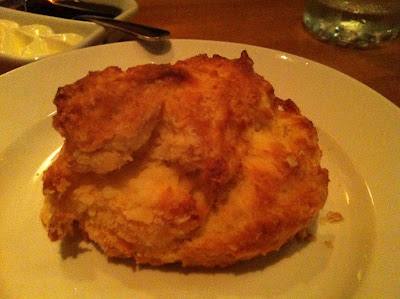 Entrees come with a buttermilk biscuit, served in a paper bag, with soft butter and molasses. A great start, both flaky and soft, and shows that Southerners are not the only ones to make good biscuits. My only minor quibble is that you must pay for extra biscuits ($0.75), though many other restaurants provide additional bread or biscuits for free. And that is my only complaint about the entire meal. 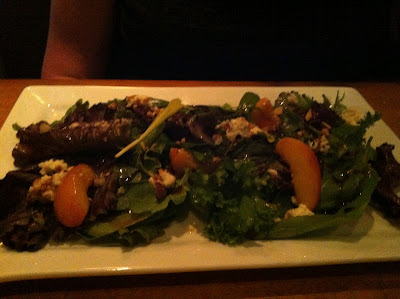 For appetizers, we chose two different ones. The Farmer's Market Salad ($9.99) varies dependent on what is available at the local market. Our salad came with greens, peaches, Dragon's Breath Blue Cheese (from Nova Scotia), almonds, and topped by a balsamic dressing. The ingredients were quite fresh and meshed well together. The blue cheese was on the mild side yet flavorful and the peaches were lush and juicy. A refreshing and tasty beginning. 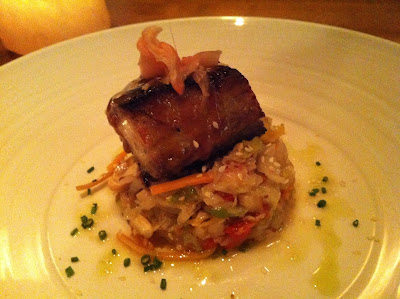 The General Tao's "Bacon" ($10.99) is a generous piece of braised Nova Scotia pork belly topped with a ginger sesame glaze and placed atop a crunchy cashew coleslaw. The pork belly was tender, with a compelling Asian glaze, making for a decadent dish. The cole slaw was also intriguing, with the addition of a crunchy texture and nutty flavor from the cashews. 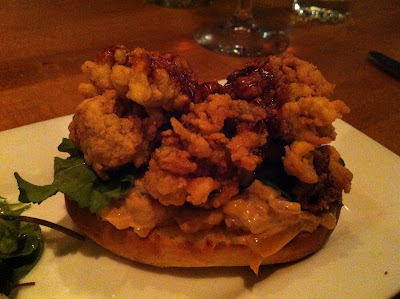 The restaurant provided us a complimentary middle course, their version of a New Orleans Po' Boy Sandwich. They topped a soft brioche bun with flash fried local oysters and a chipotle corn relish. My picture above is missing the top part of the bun, just so you could get a better view of the inside of this scrumptious sandwich. This was a perfect sandwich with clean, crisp oysters and a compelling relish that had a delightful spice and slight crunch. The soft, buttery bun complemented the sandwich and didn't overpower the oysters with too much bread. I could have easily eaten two or three of these sandwiches. 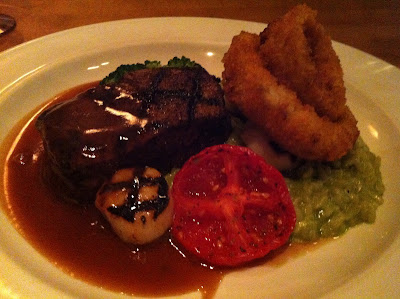 For entrees, one of our choices was the CCB Surf N' Turf ($39.99/market price), which includes a Prince Edward Island beef tenderloin, grilled sea scallops, spinach and old growler gouda risotto, candied field tomato, and buttermilk onion rings. The tenderloin, which is organic and grass fed, was ordered rare and it was cooked perfectly, absolutely tender and the sauce added plenty of savory flavor to the umami-rich and gamey beef. The scallops had a nice char and the tomato was juicy and tasty. A big surprise was the risotto which I didn't think I would like because of the spinach. Yet it was fantastic, bursting with flavor, a great texture and a pleasant creaminess. You would never have guessed it had spinach. An excellent dish and highly recommended. 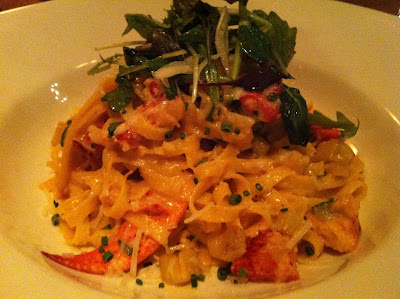 Our other entree was one of the nightly specials, a Lobster Tagliatelle ($26.99) with homemade pasta and plenty of lobster. The thin tagliatelle was cooked nicely, a good al dente, and the sauce was creamy without being cloying, complemented by the sweet lobster. This was a large portion, though I did pretty well in completing most of it. A good choice, I would also highly recommend this as well.

We were fairly full by the end of dinner so decided to split a simple dessert, some Peach Sorbet, accompanied by whipped cream and a fruit sauce. The sorbet is made on premises and was refreshing, with a rich and fresh peach flavor. The restaurant also provided us complimentary glasses of a Jost Vidal Ice Wine, which had plenty of good acidity that balanced the mild sweetness, and flavors of apricot, dried fruit and honey.

Our server was George, and the service was excellent. The restaurant was fairly busy for a Monday night and everyone else seemed to be quite satisfied with their service and food. The quality and quantity of the food is well worth their reasonable prices, and the wine list is interesting and affordable. It was an impressive dinner and I give Chives my highest recommendation. They have a great culinary philosophy, serving local, seasonable ingredients, and the cuisine, though often familiar in many respects, has plenty of excellent creative touches as well. I will return here again the next time I visit Nova Scotia.