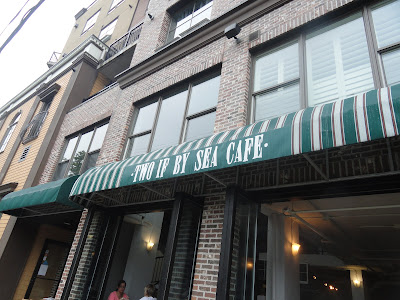 It took us about 12 hours to drive to Nova Scotia, a lengthy ride through the dark night, some fog, construction delays, and more. We journeyed there to attend a family wedding and stayed for five nights, at a hotel in Dartmouth near the waterfront. Though the hotel provided a continental breakfast, it certainly was not exciting. But culinary deliverance was just around the corner, at the Two If By Sea Cafe.

The Cafe, which also has a location in Halifax, is owned by Zane Kelsall and Tara MacDonald and opened in November 2009. Zane is the coffee expert while Tara is the baking genius, and used to sell her baked goods at local farmers' markets. It is a medium-sized shop with tables inside as well as several tables outside on the sidewalk. It has a hip and casual coffee shop feel, a fine place to while away a part of your morning or afternoon. 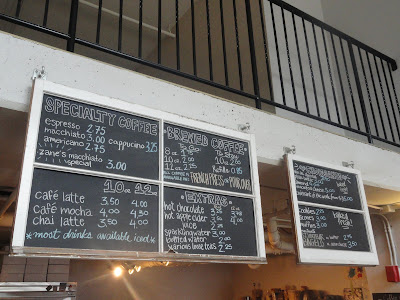 The menu is relatively small, drinks and baked goods, but that is a strength as they can concentrate their efforts onto those items. To drink, you can choose coffee, tea, hot chocolate, hot cider and more. Their coffee apparently receives raves though as I am not a coffee drinker, I did not partake. But I had some iced tea, which is freshly brewed and they will make iced tea from any of their teas, from black tea to white tea. It comes in a mason jar, with plenty of ice, and was quite refreshing and tasty. 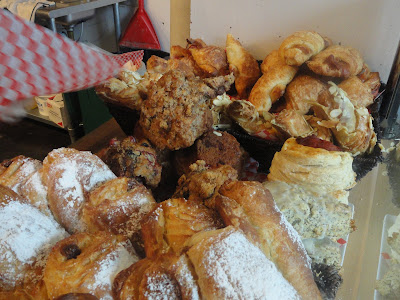 Their baked goods include muffins, scones, cookies, bagels and croissants (amazing!) though they limit the amount of each they bake. At the time of one of my visits, there were only two muffins ($3), including Mixed Berry and Carrot & Spice and two scones ($3), the Roasted Pepper & Basil and Lemon Poppy Seed. The flavors change frequently, considering what is in season, and they are all large, making them a good value. Though the muffins and scones were enticing, it is the croissants which stole my heart and I do miss them.

They serve several types of croissants, including Plain ($3), Chocolate ($3.50), Almond ($4), Prosciutto & Cheese ($5) and their Special of the Week ($5). Like the other baked goods, these are big croissants, large enough that two people might even want to split one. They are heavier than the usual croissant, containing far more layers, and probably weigh at least twice as much than the usual croissant. Yet they remain flaky and soft throughout the croissant, each bite a pure delight. I fell in love with their croissants, and stopped there every morning to buy one or two.

The plain croissants have a delicious buttery taste but the prosciutto & cheese was my favorite. The prosciutto added a salty flair to the croissant, and some of the ham that stuck out the ends was satisfyingly crispy. A perfect combination of ham, cheese and flaky bread. This is one of the best croissants I have ever tasted, putting to shame so many meager ham & cheese croissants.

One of the Special croissants of the week was the Ain't Life Peachy, which contained peaches, vanilla, sugar, and toasted coconut. Another delicious choice, though I would have liked to see a few more peaches inside it. But the flavor combination worked very well, and it was not overly sweet. Another good choice.

If you are in Dartmouth or Halifax, then you must stop by Two If By Sea Cafe for their croissants. They are well worth the stop and I bet you will love them as much as I did. When I return to Nova Scotia, they will be at the top of my list. Highly recommended!