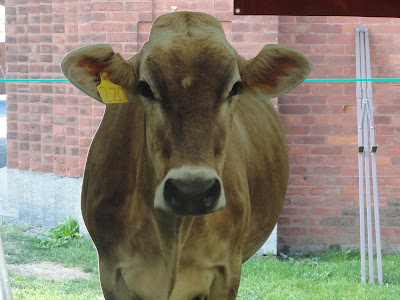 In a previous post, I discussed the beverages I enjoyed at the 4th Annual Vermont Cheesemakers’ Festival at Shelburne Farms. Presented by the Vermont Cheese Council, the event showcased over 40 Vermont cheesemakers, presenting more than 200 Vermont cheeses for sampling. For a cheese lover, this is a smorgasbord of dairy pleasures, the delicious products of local cow, sheep and goat milks. There was a vast diversity of cheeses, from chèvre to blue cheese, from cheddar to mozzarella. Besides all these cheeses, there were other foods as well, from candy to croutons, breads to hot sauces.

In this post, I am going to highlight some of the cheeses and other foods which most interested me. I did not taste all of the cheeses and foods that were available, though I have tasted a number of them on prior visits. I recommend you check out the Cheesemakers Festival next summer.

“Dessert without cheese is like a beauty with only one eye.”
--Jean Anthelme Brillat-Savarin 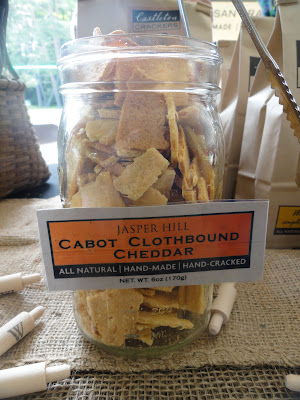 One of the first items I tasted at the festival were some of the Whitney's Castleton Crackers. The crackers are supposed to be all natural, hand made and hand cracked. They have about a half dozen different flavors, and their newest is Cabot Clothbound Cheddar (which is not even listed yet on their website). I am a huge fan of this cheese so was intrigued by this cracker. The cracker is very firm, which is good if you want to spread something on it, and it had a nice, strong cheddar taste to it. They have enough taste that you could enjoy them on their own, though if you wanted to top them with something, the cheddar flavor would complement the topping. 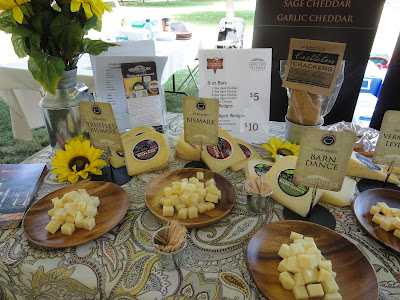 On one of my prior trips to the Festival, one of my favorite cheeses was the Grafton Clothbound Cheddar from Grafton Village Cheese. I stopped at their table this time and they were presenting several of their Cave Aged cheeses. The Cave Aged Vermont Leyden is historically produced in the Leiden area of the Netherlands, where it is known as Leidse Kaas. It is a cow's milk cheese which has been aged for at least two months. It had a bold and buttery taste with an intriguing herbal component from the addition of cumin.

The Cave Aged Bismark is named for a legendary Vermont ram from the late 19th century. It is a sheep's milk cheese that has been aged for at least three months. The Bismark has an intriguing taste, nutty, creamy, and with a zippy tang on the finish. They also have a Cave Aged Truffled Bismark which was even more impressive, adding a delicious earthiness due to the addition of white and black truffles as well as some truffle oil. This would be a perfect cheese for an umami rich Sake, like a Kimoto or Yamahai. 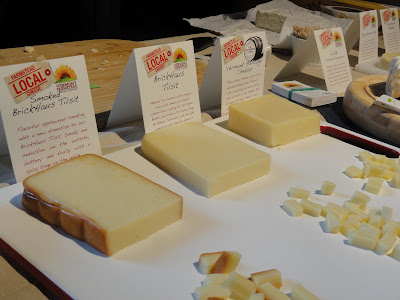 The Vermont Farmstead Cheese Company is devoted to sustainable dairy farming practices and is opening a new production facility and aging cave in Windsor, Vermont. They raise a mixed herd of cows including Ayrshires, Brown Swiss, Holsteins, Jerseys, and Red & White Holsteins. This was their first year at the Festival.

The Farmstead Cheddar has a pleasant, buttery and slightly sweet taste with a nice, form texture. The Vermont Heritage Cheddar ramps up the flavor, providing more depth and complexity on the palate. An excellent cheese. The Lille Farmstead Coulommiers is similar in some respects to a Brie, and possesses a creamy taste with elements of mushrooms and butter. The earthiness of the taste really appealed to me. The
Smoked Brickhouse Tilsit, of Danish ancestry, was a firm cheese with a smoky and spicy taste, yet with a creaminess as well. The Windsor Dale uses an 1800 recipe of an Old English farmhouse cheese and was quite intriguing, possessing a fruity taste complemented by a mild sweetness. 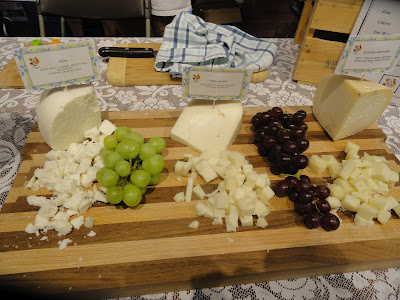 The Boston Post Dairy is a small family run farm and all of their cheeses are made with goat's milk. The farm is owned by Robert and Gisele Gervais and their four daughters. Robert and Gisele also have eleven boys, quite a large family.Their Feta was compelling, with a nice texture and a mild, creamy taste. It would be great with watermelon or over a salad. The Tres Bonne is a semi-hard goat cheese with delicious buttery and nutty elements, and an element of creaminess. The Eleven Brothers, named after their actual eleven brothers, is a semi-hard, washed rind goat cheese, reminded me of an aged cheddar and was quite tasty. Even their Plain Chevre was fresh, light, clean and extremely creamy. It is one of the better Chevre I have tasted in awhile. 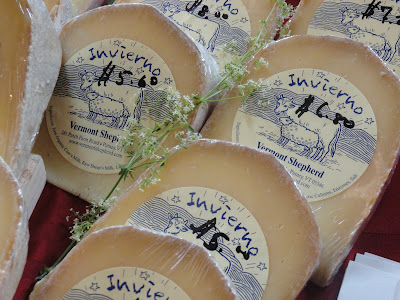 Vermont Shepherd Cheese is made on a 250 acre farm that raises 300-700 sheep, dependent on the season. Their cheese is made seasonally, such as the Verano (summer cheese) and Invierno (winter cheese). I tasted the Invierno, a blend of cow and sheep's milk, the cow milk coming from the nearby Livewater Farm. It is a natural rind cheese that is aged from 5-9 months in their own cave. The cheese had a firm texture with bold flavors of butter, nuts, grass and even herbal hints. Quite an interesting blend of flavors. 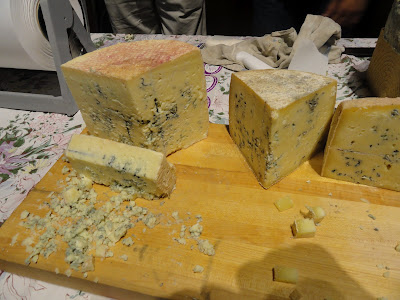 The Bonnieview Farm is a sheep dairy and they make several different sheep's milk cheeses. The farm has been in the family since 1890. Their Mossend Blue is a medium pungent blue, with a firm yet crumbly texture, and a pleasant, mild taste. The Seven Brock Blue has a much stronger flavor, which I enjoy, so it was my favorite of the two. Give me a nice glass of Port and I would be very happy. 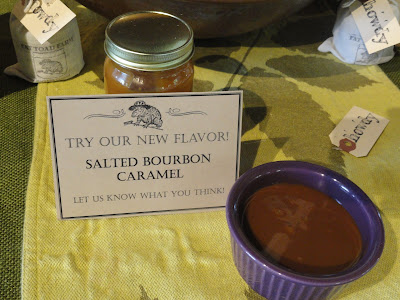 I have raved before about the goat's milk caramel sauces from Fat Toad Farm and they had a new flavor at the festival, Salted Bourbon Caramel. All I had to do was see that flavor, and I knew I had to taste it. and it lived up to my expectations, with that sweet, creamy flavor complemented by a salty element and the vanilla from the bourbon. Pure heaven. You must try their caramel sauces. 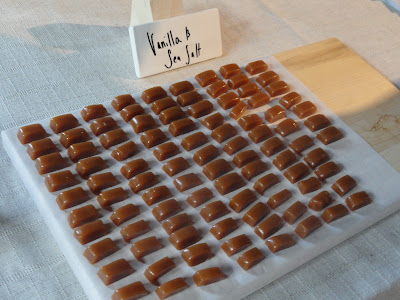 More caramel delights! Big Picture Farm is a goat dairy and they make goat's milk caramels. It is a relatively new farm, having started in 2010. I tasted two of their hand-made caramels, the Chai and Vanilla & Sea Salt. The Chai was spicy, with a nice cinnamon and nutmeg kick, and it was not overly sweet. My favorite though was the Vanilla & Sea Salt, just bursting with creamy flavor, prominent vanilla, that great salty contrast and just the right amount of sweetness. These are very addictive.

"A corpse is meat gone bad. Well and what's cheese? Corpse of milk."
--James Joyce
Posted by Richard Auffrey at 4:00 AM

I love all those cheeses! Going to VT is dangerous for me because I LOVE cheese.

Grafton is still my favorite, but then again we visit one of their two locations almost every trip!