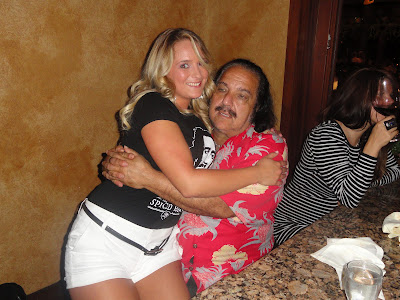 If you speak Spanish, you likely know that the word "ron" means "rum," that spirit made from sugarcane and/or molasses. I'll also refer you for more information about rum to my previous post, Rum: A Brief History & Trivia.

Called Ron de Jeremy, the "Adult Rum" (is there a Childrens' Rum?), there are now two rums in their portfolio, a seven-year old rum and the recently released spiced rum. Ron Jeremy came to Boston for a couple days to promote the new spiced rum, and I had the opportunity to meet him, ask a few questions and taste the rums. We met while he dined at Tresca in the North End, and he seemed tired, maybe jet lagged, so it wasn't the best situation for an in-depth interview.

Ron has visited Boston before, but it has been some time since his last visit. He is really not much of a drinker, though his favorite cocktail is the Amaretto Sour. It is obvious he loves to eat, enjoying all types of cuisines, and certainly had a hearty appetite at Tresca. For his entree at the restaurant, he selected the Cioppinno Amalfi. (Should they rename the dish to Cioppinno Jeremy?) One of the few foods he dislikes is blue cheese.

He was personable, telling some dirty jokes during the course of the evening, and I was unaware of his musical talents. He plays the piano and harmonica, and even broke out his harmonica during dinner, when a couple street musicians on Hanover Street played for us. Our table was next to the large open window so many passersby stopped to take a quick photo of Ron.

The Ron de Jeremy rums were crafted by Master Distiller Francisco "Don Pancho" Fernandez, a Cuban with an excellent reputation in the rum industry. The namesake rum, Ron de Jeremy, ($30) is a 7 year old rum from Panama, which is a light amber colored with an appealing aroma of vanilla and spice. It is very smooth on the palate, with a complex mix of spices up front and more vanilla notes on the finish. I very much enjoyed this neat.

The Spiced Rum ($15.99) is much darker in color, and is produced with a blend of vanilla, cinnamon and nutmeg. It too is very smooth but with much more sweetness, vanilla and caramel, and an undercurrent of spice. It was too sweet for my preferences to enjoy neat, but would probably do much better in a cocktail.

What's next for Ron? Hedgehog Pinot Noir?
Posted by Richard Auffrey at 4:00 AM