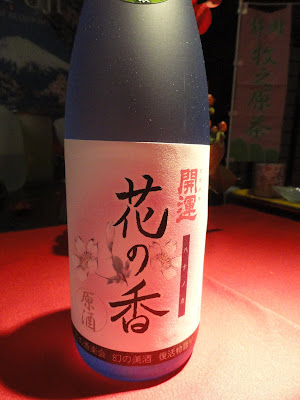 1) Join me on Twitter this Wednesday, August 22, from 9pm-10pm EST for #WineChat. I will be the guest host for a discussion on Sake, that exciting and delicious Japanese alcohol. Everyone is welcome to join the talk on Twitter, and I will try to answer any Sake questions that you have. I will be talking about many different Sake topics, from food pairings to the basics of Junmai and Daiginjo. It is always a fun time on #WineChat so come join everyone on Twitter for this Sake discussion.

2)  Did you know Russian President Vladimir Putin is a fan of warmed Sake? The Asahi Shimbun recently published an article, Sake brewers target overseas markets to survive, which discusses how Sake breweries in Japan are looking to exports to help their industry. As the article states: "Total exports from Japan hit a record high of 14,014 kiloliters last year, roughly double that of a decade ago, but they still represent just 2 percent of overall shipments."  Almost 30% percent of exports are sent to the U.S. with South Korea and Taiwan occupying second and third place. Russia appears to be a promising market now too, especially when Putin admitted to enjoying warmed Sake. Guess with all those cold nights, warm Sake helps stave off the cold.

3) The Japan Daily Press echoed the sentiments of the Asahi Shimbun article. Their article, Sake sales improve, brightening prospects of industry resurrection, also notes how Japanese Sake breweries are increasingly looking toward exports to help them. For the fiscal year 2011, Sake shipments increased 1.2% over 2010, the first upward swing since 1995. Part of this is due to increased shipments of Sake from the Tohoku region, many people helping to support this area which was devastated by the March 2011 tsunami.

4) My next Tipsy Sensei story, The Fox & The Katana, should be published this upcoming week. It involves a kitsune, a fox spirit, who asks Nate, a Sake expert, to kill her mate. Her mate is also a kitsune and might be engaged on a murderous rampage, slaying many innocents with a katana, a samurai sword. Will Nate kill this deadly kitsune, or can he stop him in some other manner? Or is the kitsune actually innocent and Nate is being set up in some twisted game? Before this story is released, you should read the prior two tales, Yurine's Pot and The Ghost of a Ninja. I am also working on Tipsy Sensei #4, tentatively titled Demons, Gods & Sake, and it will be a novel.
Posted by Richard Auffrey at 4:00 AM