I have often stated that an important way to drive a greater passion for Sake in consumers is to better educate them about Sake. Importers can help in this regard by designing informative labels for the Sakes they bring into the U.S. As I have said before, a Sake bottle, wrapped in kanji characters, can be very intimidating, but if the back label is in English, in relatively plain language, then that can reduce the intimidation factor. It will also help wine store employees who don't know much about Sake but can read the back label and have a better idea about what is inside the bottle.

Joto Sake, a Sake importing company which represents six artisan breweries, is doing their part to promote Sake education. Joto, which is an ancient Japanese term meaning "excellence," tries to design more informational labels for their Sakes, to make them more accessible to the average consumer. That can be extremely helpful to a person who knows little about Sake. Joto recently held a Sake tasting, a kikishu, at Fugakyu, a Japanese restaurant in Brookline. Three Sake breweries, kura, were present, and about ten Sakes were poured. 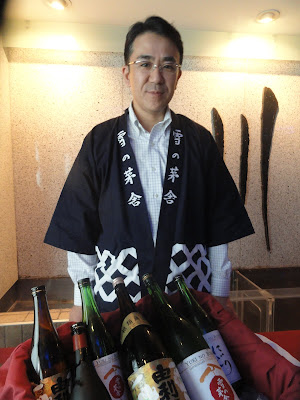 The Saiya Brewing Company, founded in 1902, is located in the Akita prefecture which is in the northern Tohuku region of Japan. It is managed by Kotaro Saito, pictured above, and their philosophy is basically that the sake brews itself, the toji merely acting as a guide. Thus, they engage in very minimal intervention, often letting the sake develop as it desires. This is an interesting philosophy which mirrors the thoughts of a growing number of wine makers.

Most of the Sake they produce is genshu, undiluted sake, though it may not indicate it on the label. Interestingly, the alcohol content of their Sakes is only about 16%, which is unusual as most genshu is usually around 20% alcohol. Somehow their brewing process creates a lower alcohol sake that does not need to later be diluted with water.

More than half their Sake is also produced in the Yamahai method, in which lactic acid is not added to the yeast starter. Yet again they do not place that on the label because they feel consumers have too many preconceptions about this brewing method. it. Some people dislike Yamahai while others expect it to have an earthy component. But they produce a more refined yamahai so any earthy character is very much muted. They were also the first brewery to produce a certified organic Sake. They produce two brands, Yuki No Bosha ("cabin in the snow") and Yuri Masamune. They use a few different Sake rices, including the indigenous Akita Komachi ("beauty of Akita"). 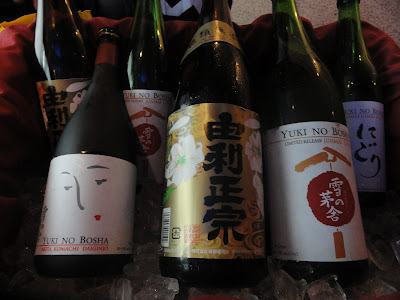 The Yuki No Bosha Junmai Ginjo, Limited Release would actually qualify as a Daiginjo, as 50% of the rice has been polished away, but they chose to label it as a Ginjo. It is a light, dry and complex Sake, with some subtle fruit flavors, including peach and melon, with hints of herbs on the smooth finish. A very easy drinking Sake which would appeal to newcomers to Sake as well as Sake lovers. The Yuki No Bosha Daiginjo, made with Akita Komachi rice milled down to an incredible 35%, is smooth, complex and possesses plenty of subtle tropical fruit notes. Aromatic and pleasing, this is an impressive Sake sure to please the discerning Sake lover or to thrill newcomers.

The Yuki No Bosha Junmai Ginjo Nigori is an usu-nigori, a "thin" nigori which has been pressed so only a minimal amount of the lees end up inside the Sake. This Sake would also qualify as a Daiginjo as 50% of the rice has been polished away, but they chose to label it as a Ginjo. Unlike many sweet Nigoris, this is more on the dry side, with a Sake Meter Value of +3. This was a smooth, bright and dry Sake, with nice fruity accents. This is my preferred style of Nigori so I enjoyed it very much. The Yuri Masamune is a Honjozo, with the rice polished down to 68%, and can be consumed either slightly chilled, at room temperature or even gently warmed. It does have a bit more of a harsh taste, with flavors of steamed rice and a little earthiness. 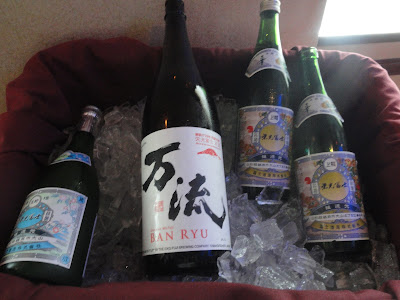 The Eiko Fuji Brewery, founded in 1778, is located in the Yamagata prefecture which is also located in the Tohoku region of Japan. The brewery takes its name from the famed Mount Fuji, hoping their Sake will equal the glory of that major Japanese symbol. Kodai Kato, the Manufacturing Manager, was present to pour their Sakes and share his knowledge.

The Eiko Fuji Namazake, which has only been pasteurized once, is available year round, unlike many other namazakes which only come out during the Spring. But they brew the namazake, storing it at 5 degrees Celsius, and then ship it out when necessary. As expected, it does not taste like many other namazakes, lacking that zippy freshness, but still is tasty, being more smooth and rich, with delightful flavors of green apple, pineapple and melon. The Eiko Fuji Ban Ryu ("ten thousand ways") refers to the Sake adage that there are 10,000 ways to brew Sake. The rice for this Sake was polished down to 65%, and it is dry with a strong anise flavor dominating over the undercurrent of tropical fruits. A very intriguing flavor combination. The Eiko Fuji Honkara is a Honjozo, and the term "honkara" is an abbreviation for "Honjozo Karakuchi." Karakuchi refers to a "dry" Sake, and with a Sake Meter Value of +10, this is a dry one. It would technically qualify as a Ginjo, as the rice has been polished down to 60%. It was smooth, crisp and aromatic with hints of steamed rice. 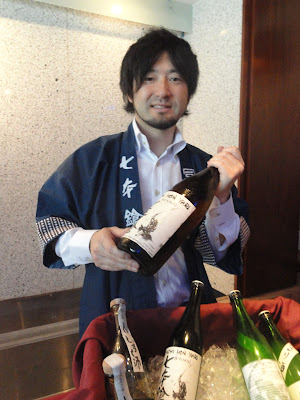 The Tomita Shuzo, founded in the 1540s, is one of oldest breweries in Japan. It is located in the town of Kinomoto in the Shiga prefecture and we met Yasunobu Tomita (pictured above), the Executive Director of the kura. As the entire town of Kinomoto burnt down in 1752, the actual brewery building only dates from that time. They are also one of the smallest Sake breweries in Japan, producing only about 5000 cases each year. Their brand is Shichi Hon Yari which refers to seven legendary spearmen from the battle of Shizugatake which took place outside Kinomoto in 1583. Those skilled spearmen brought victory to their liege Hideyoshi. Most of their Sake is made from indigenous Tamazakae rice. 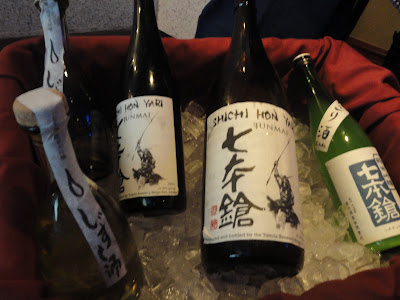 The Shichi Hon Yari Junmai Ginjo Nigori is another dry Nigori, and that was their intent, to reduce the usual sweetness. It was dry yet with smooth, excellent tropical fruit flavors. Very pleasing and a style of Nigori I very much enjoy. The Shichi Hon Yari Junmai, which would qualify as a Ginjo as the rice is polished down to 60%, has a heavy, rich flavor with an intriguing combination of earthiness atop melon and peach elements. A nice umami taste so bring on a mushroom risotto.

Maybe the top treasure of the tasting was the Shichi Hon Yari Shizuku Junmai Daiginjo, where the rice has been polished down to 45%. This Sake was pressed using the rare Shizuku ("drip") method, where bags of the sake and lees are tied off at the neck and hung up, so the sake will slowly drip out over time. This is also sometimes known as kubi-tsuri ("hung by the neck"). This is supposed to produce a high quality Sake, though you also produce less Sake than through other pressing methods. This was an amazing sake, crisp and clean, complex and subtle, delicious and dry. It goes down so smoothly, as they say, "like drinking water," which is a high compliment for Sake. They produce very little of this Sake, and it could run you $100 or more, but for a Sake lover, it will be worth every penny.
Posted by Richard Auffrey at 4:00 AM

Your post is interesting. a lots of information here i got. thanks for sharing with us