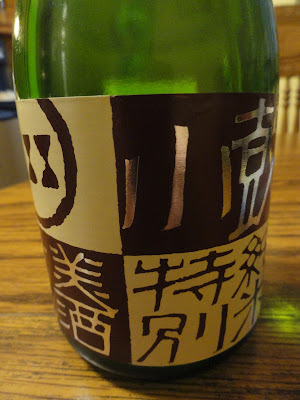 I have been spreading my passion for Sake...


This past Wednesday, I was the guest host on #WineChat, a weekly online discussion on Twitter, and the topic was Sake. Beginning with some basics on Sake, the discussion quickly transformed into an intense Q&A and I spent much of the hour typing responses to everyone. The discussion was very well received, and numerous people voiced their pleasure at learning so much about Sake. The passion and excitement about Sake was contagious and some of the attendees were even drinking Sake at home while they participated in the discussion.

I did the same, opening a Sake that was new to me, the Nishiyama Kotsuzumi ("Little Drum") Tokubetsu Junmai. The Nishiyama Brewery, which was established in 1849, is located in the middle of a mountain range in the Hyogo prefecture. The name "Kotsuzumi" came from a famous poet, Kyoshi Takahama, who tasted some of the Nishiyama Sake and described it, in a poem, as like a kotsuzumi, a "beautiful ancient small hand drum."

They brew their Sake with some rarer ingredients, including their yeast and some of their rice. For example, they use Ogawa 10th yeast, which is notoriously difficult to use but which creates a delicate, subtle aroma. This Tokubetsu Junmai ($27.99 for 500ml) is made with a local, rare rice called Hyogo Kita Nishiki and the rice was milled down to 65%. It also has a Sake Meter Value of +9, meaning it is more on the dry side.

This Sake possessed a subdued aroma, an intriguing whiff of steamed rice combined with nutty elements. On the palate, it was very dry, crisp and full bodied with a pleasant blend of flavors, including marshmallow, almonds, and caramel, reminding me in some respects of an aged Sherry. The finish was pleasing and fairly long, and I certainly yearned for more. Over the course of the evening, two of us finished the bottle and I would certainly buy it again, and it earns a hearty recommendation. 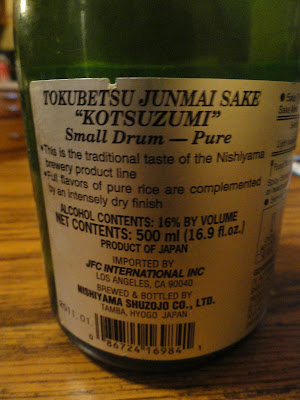