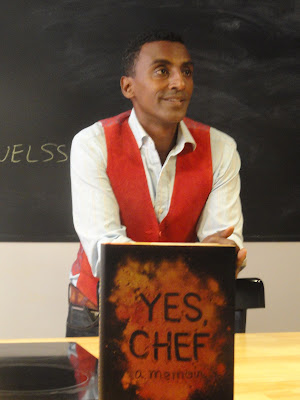 I have most often seen Chef Marcus Samuelsson in culinary competitions, either as a contestant or judge, on shows such as Chopped, The Next Iron Chef, Top Chef and more. I greatly enjoyed dining at one of his previous restaurants, Aquavit, in New York City. And recently, I had the opportunity to meet him in person and to hear him discuss his new book, Yes, Chef.

I received an invitation from KitchnTable to attend a small, private event they were sponsoring at 3 Scoops Cafe in Brighton. There would be a light lunch, a short presentation from Chef Samuelsson, and a brief Q&A period, after which he would sign copies of his book. 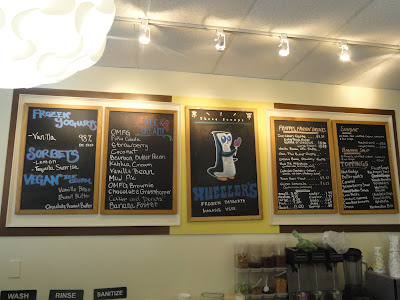 Above is an approximately ten minute video of the majority of Chef Samuelsson's talk, and his topics range far and wide. Of course he discusses his new book, which is a memoir, but also discusses the profession of cooking, matters of race, community, the problems of inner cities, and much more. It took him about five years to write this book and it is a description of his journey through life, noting that a black man's journey is different. He stated that "getting to know yourself" is essential to becoming the chef you desire to be, and he feels he knows himself well. The tragedy of 9/11 struck Chef Sameulsson hard, causing him to make a deeper commitment to his craft as well as New York City. He also discussed how Harlem is representative of many inner cities, which often have difficulty in acquiring fresh produce year round.

One of the fascinating stories he related dealt with his Swedish grandparents, who had lived about 20 miles from each other, one by the sea and the other inland. Though many people might assume they both prepared a similar Swedish cuisine, that was far from the case. That short distance actually played a significant role in their usual diets. For the one on the coast, fresh fish was paramount and common, while the one inland rarely had fish, and had to work much more with vegetables and such, more of a diet of poverty. Sometimes small details can have a huge impact. Chef Samuelsson was quite reflective and philosophical, as well as charismatic. Despite the time constraints, he still wanted to be able to answer many of our questions. He noted that he is not contemplating any future projects at this time, simply living in the immediate moment. After devoting all those years to his book, it is time now for a bit of relaxation, before moving onto something else. But he indicated that any potential future plans would most likely involve Harlem.

I now have a copy of his new book and plan to read it soon, to learn more of Chef Samuelsson's interesting journey through life. Check out the video, and maybe it will motivate you to purchase his book.
Posted by Richard Auffrey at 4:00 AM