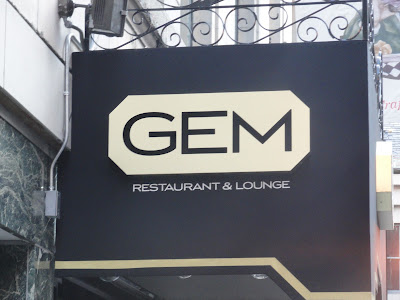 Chef Kevin Long impressed me with his efforts at Red Lantern, an Asian restaurant and bar on Stanhope Street. So, when I and a guest received an invite to check out one of Chef Long's newest endeavors, GEM Restaurant & Lounge, I was intrigued.

GEM, located downtown in the Jeweler’s District next to Sam La Grassa's sandwich shop, opened in March and is part of the Big Night Entertainment Group, which includes other restaurants such as Empire, Shrine, and more. GEM is self-described as a "fusion of gastro-lounge and ultra exclusive supper club." It is supposed to possess the ambiance of a "private dining supper club" and provide a "sophisticated take" on comfort food. To me, this creates certain expectations about the cuisine, that it will be above average in quality and execution. 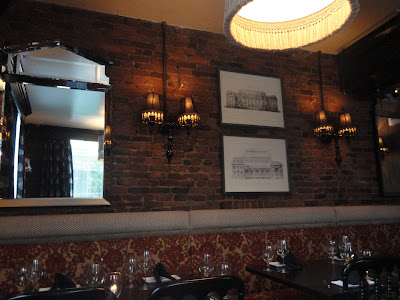 The dining room is small, possessing only 36 seats, and it is reservation only. It is elegant and possesses an appealing, old-fashioned and intimate feel. It would be perfect for a romantic date or an elegant dinner. For a "private dining supper club," I think the room does seem special and provides the right vibe. On a Wednesday evening, it was relatively quiet, with only a few tables occupied.

The wine list is relatively small, with about 25 wines by the bottle and 15 by the glass. The least expensive bottle is $50, with 10 bottles over $100, and glasses generally run $11-$14, though you can also order a glass of Dom Perignon Champagne for $45.

Cocktails and martinis generally range from $12-$18. I tried the Province St. Smash ($12), a blend of Maker's Mark, ginger beer and peach bitters, and was impressed, especially as it was not overly sweet and had a balanced taste of vanilla, peach and ginger. It is a cocktail I would order again. I also had a Hurrikane ($12), made with 10 Cane Rum, Myer's Dark, orgeat, pineapple and orange. This will remind you of a Mai Tai, and tends to be a bit sweet and fruity.

The food menu is essentially plenty of comfort foods, with 10 Firsts (appetizers) priced $9-$18, 7 Mains priced $15-$31, 4 Sides priced $6-$8, and 3 Bar Bites priced $5-$6. There were also a few Specials on the evening I dined there. My dining companion has some food allergies and called the restaurant ahead to make them aware of it. When we arrived, the restaurant was quick to raise the issue, pointing out which dishes to avoid, while also noting that the chef could revise some of the dishes to avoid the allergy ingredients. They deserve kudos for their attentiveness to this significant issue. 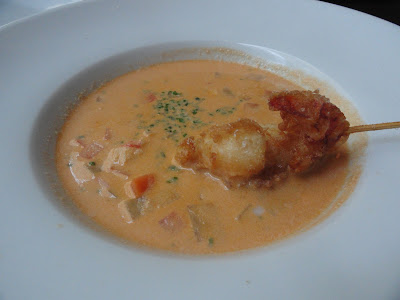 I began my meal with the New England Lobster Chowder ($16) which is topped by a large shrimp tempura. The chowder was very creamy, spiced well, and bursting with flavors including a nice smokiness. There was lots of bacon within it and the tempura was good, though the coating lying in the chowder lost its crispiness. The chowder was also perfect for dipping my bread. Excellent comfort food with a sophisticated twist, the type of dish I would expect to find here and a good start to the meal. 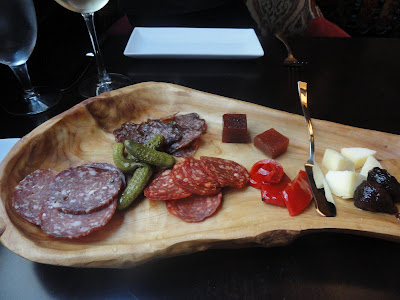 We also began with the Salumi Board ($15), though I will note that we did not get the usual pork rillette because of my companion's allergies. Unfortunately, most of the charcuterie is not done in house, except the rillette though they do rehydrate their figs and peaches. The various meats were tasty, as well as spicy, but this is the same type of dish you can find in many other restaurants. It would have been much better if all of it was made in house. There was nothing wrong with the taste, but it is just an average and commonplace dish, lacking a sophisticated twist. 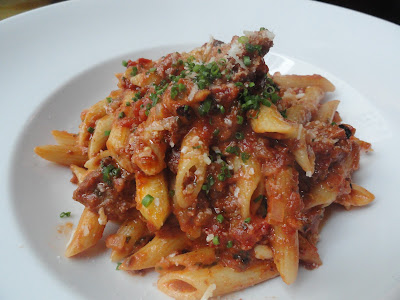 A similar problem plagued my entree, the Penne Bolognese ($23). I am a huge fan of Bolognese so figured I had to try it here, especially as the ragu included beer and wild boar. It was good, with plenty of tender meat, but nothing special, and I wasn't keen on the apparent slices of zucchini in it. Plus, some of the pasta seemed a bit overcooked, not al dente enough. I have had much better Bolognese in many other places. Again, it was an ok dish, but it lacked anything to elevate it beyond the commonplace. I would not be motivated to order it again or recommend it to others. 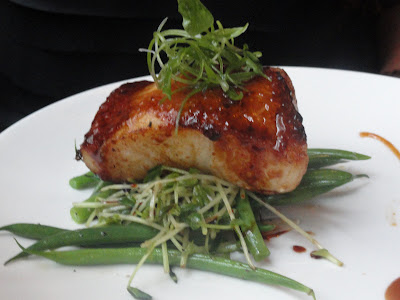 The Roasted Sea Bass ($31) is made with white miso and soy, and its flavor was superb. Just the right amount of sweetness, offset by the salty umami of the soy, and the fish was cooked perfectly. This dish comes with only some pea shoots, and I feel the price is a bit high for the quantity of food you receive. 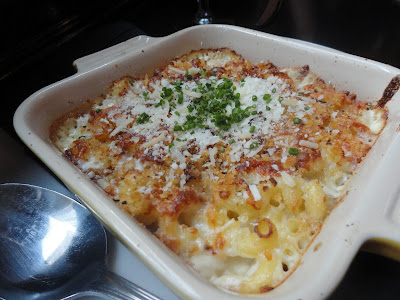 For sides, I tried the Mac & Five Cheese Gratin ($8) which might have been my favorite dish of the night. Cooked perfectly, with a crispy top of buttered breadcrumbs and rich, cheesy noodles, this was the perfect comfort food, elevated to a high level. Nice levels of flavor, this bests many other mac n' cheese dishes you will find elsewhere. This dish gets my highest recommendation and I would probably order it every time I visited GEM. 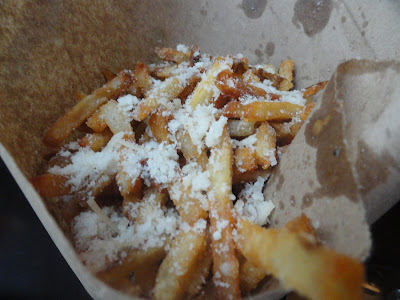 The House Fries ($8) are made with truffle butter, Piave and herbs and should have been good but most of the fries were tiny pieces, as if they were the remnants of a batch. They were not the typical length fries you get elsewhere, which are easy to pick up with your fingers. The taste was there, but failed in the execution. 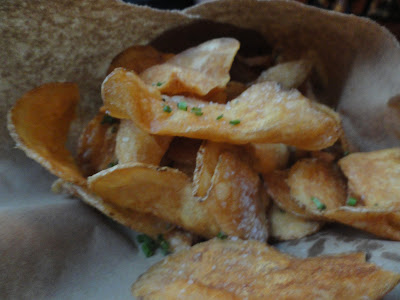 From the Bar Bites, we chose the Warm Potato Chips ($5), which come with a caramelized onion dip. But we didn't need the dip, savoring the warm chips on their own. They reminded me of the home made chips I had in my home when I was a child. Great crispness, lots of flavor, and they were not greasy. Another winning dish. 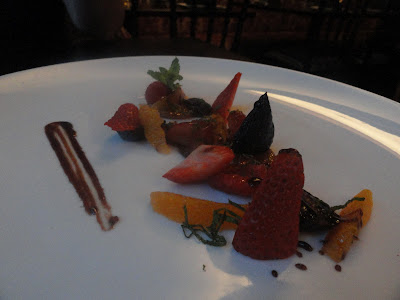 For dessert, there is usually only a single, rotating option and on the night of my visit, it was an Irish Whiskey Tiramisu, which we didn't choose to order. Instead, they gave us some macerated fruit with a balsamic and Kahlua reduction, and it was pleasant.

I have mixed feelings about GEM, especially as it has been open long enough to have worked out its initial kinks. I feel the menu and some of the dishes need some work. For an "ultra exclusive supper club" with a "sophisticated take" on comfort food, I have certain expectations that the cuisine should be elevated above merely average. Plus, at their price points, you expect something special. A few of the dishes met this high standard, but others failed. If I desire high quality comfort food, I want something more unique, a reason to choose one restaurant over another. GEM has potential, but it has not yet realized its full potential.

Posted by Richard Auffrey at 4:01 AM