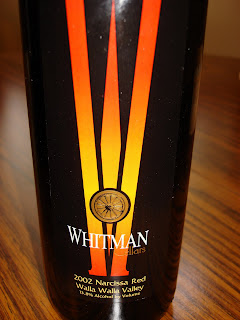 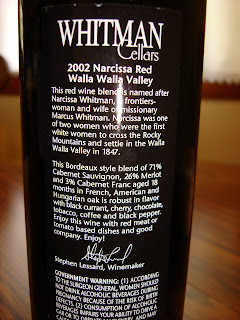 Whitman Cellars was started by John Edwards and Larry & Sally Thomason in 1998. The name of their winery derives from Marcus and Narcissa Whitman, a brave and idealistic young couple who traveled west to set up a Christian mission amongst the Cayuse people in the 1830s. Narcissa was one of the first women to cross the Rocky Mountains and make it to Walla Walla. The Whitman's unfortunately brought disease with them which killed many Cayuse. The Whitmans were killed and their mission was destroyed.

Whitman Cellars makes traditional Bordeaux and Rhone style wines. They currently produce Viognier, Syrah, Cabernet Sauvignon, Merlot, a port, and three proprietary blends called "Narcissa", "Killer Cab", and "Del Rio Red". Fruit is sourced from 19 different vineyard blocks in the Walla Walla and Red Mountain appellations. These appellations offer a wide range of flavor profiles which are used in their blending. They only produce about 5,000 cases a year.

The 2002 Whitman Cellars Narcissa Red ($24) is a Bordeaux style blend made of 71% Cabernet Sauvignon, 26% Merlot, and 3% Cabernet Franc. It was aged for 18 months in French, American and Hungarian oak. I first had this wine last year while vacationing in Seattle. I very much enjoyed it and bought some to take home.

The Narcissa is very much a Bordeaux style wine. It has a nice, aromatic nose with a tinge of violet. It is a powerful wine though not a fruit bomb in the least. There are some rich dark fruit flavors but also some black pepper and cocoa. It is a smooth wine, with mild tannins, and a lingering finish. There are layers of complexity making this an excellent value for the price. A fine expression of what the state of Washington can do with wine.

A highly recommended Drink & Buy.
Posted by Richard Auffrey at 9:48 AM