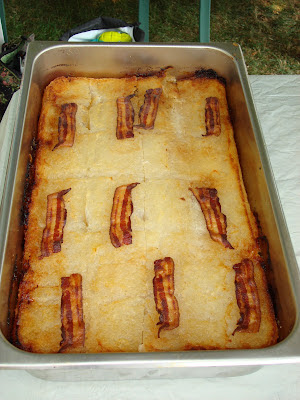 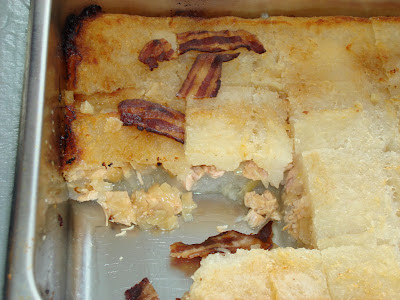 This weekend we had a large family BBQ, with family on both sides. Though it was a very hot and humid day, we still had lots of fun, and ate much great food. The star of the day was the Rappie Pie, an old tradition in my in-laws family.

Rappie Pie is a traditional Acadian dish. Though its origins are murky, it may have made its appearance in Nova Scotia around 1755 when the Acadians were deported. There are a few legends that it may actually extend back to the 1500s. It has remained popular, especially by the Acadians of Southwest Nova Scotia.

Rappie pie is a made from grated potatoes or in French, "patates râpées." The French word râper means "to grate." Thus, that became transformed into "rappie" pie. Once the potatoes are grated, most of the water is removed. This used to be done by squeezing the potatoes in a cheese cloth, a laborious process. Then, broth is added along with meat, onions and pork fat to make a casserole type dish. There are a number of variations on this basic recipe, some people using different types of meats or even seafood like clams.

People generally put butter or molasses on their Rappie Pie. There is an old adage that the English use butter and the French molasses. Some people may put other items atop their Rappie Pie, even ketchup, but that is much less common.

It used to take all day to make Rappie Pie, especially trying to squeeze the water out of the potatoes. Nowadays, you can buy frozen packets of potatoes where the water has already been removed. This makes it much quicker to make.

My in-laws make Rappie Pie a few times each year, usually making it into a large family gathering, helping to promote closeness in the extended family. Nearly everyone loves Rappie Pie and the next generation is learning how to make it. It is definitely not a tradition that will die out.

I love Rappie Pie, slathered in butter. Sometimes people don't like its color, the grayness of the interior, but once they taste it, they change their mind. And besides its deliciousness, the sense of family behind the gatherings is also great. Such a nice tradition. We will have another big gathering in the winter and I am looking forward to it.
Posted by Richard Auffrey at 5:46 PM

Email ThisBlogThis!Share to TwitterShare to FacebookShare to Pinterest
Labels: Food

This looks very good , and I love that the recipe comes with a story! I also love your wine posts. I am glad I found you on the foodie blogroll!

Hi Deborah and welcome to my blog. Thanks for your kind words. I will have to check out your blog as well.

With mother being a LeBlanc and father a Bourque, I am no stranger to Rappie pie. I've done my share of grating. We always bring back several d'Eon's frozen pies. Have you found a local outlet for the grated frozen potatoes?

Hi Bruce! Sorry, we have not found a local outlet. We still have to have someone bring us the frozen potatoes from Nova Scotia. Though our family is having another Rappie Pie party next month and a couple people bought a new machine to make our own potatoes. Don't know how the machine will work yet. I will report back next month.

Hi Richard,
Sorry to be late with the comment, but being Acadian with my dad from Wedgeport, I can tell you the French from home do not put molasses on their Rapure. But it is a wonderful food.

Hi Jeff:
No need to apologize as comments as always welcomed, even on older posts. Thanks for the input.

I am looking forward to having som Rappie Pie in a few weeks at another family gathering.

I LOVE rappie pie and have not had it for about 15 years! Must try & recreate it sometime.

Just found this post! I too am a LeBlanc! Making a rappie pie right now and telling stories with the family! I also smother it with butter!

Good Morning Richard. Found your article interesting about the Rappie Pie. I would like to invite you to check out The Poutine Ladies Facebook site @ https://www.facebook.com/poutinladies.poutin

The Poutine Ladies have been Making Poutines (New Brunswick Style - Or some call Potato Dumplings) Rappie Pie, Pork/Meat Pies and Gorton (Creton) for several years in the Fitchburg/Leominster area. We do this once a month in what used to be the French Section of Fitchburg. Although, your Rapee is slightly different then how we make it, we do have requests for the Chicken. We mostly use Pork/Salt Pork in our Rapee. This has become a big hit with our customers. Would love to have you come visit us on one of our Poutine Days. We also were invited and sponsored this year at the Johnny Appleseed Festival which will be September 27th. If you want to mark your calendar would love to meet you. This is quite the event in Leominster, MA each year. Last year they had over 1500 Vendors. So hope to hear back from you Richard. Please join us on the Poutine Ladies Site or email us at: poutinladies@yahoo.com. Thank you, The Poutine Ladies, Cheryl, Annette & Nancy.

Check out Rappie Pie Rules on Facebook for all things Rappie. How to cook it. Regional variations and consistency., to crust or not to crust. Loose or firm. It's a fun group of Rappie lovers !