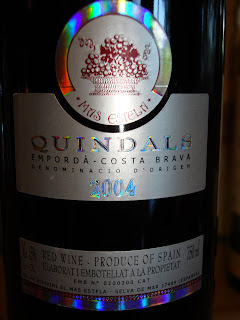 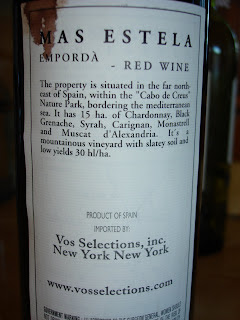 Here is another wine from a small, largely unknown region of Spain. This wine is from the Emporda-Costa Brava D.O. This region is in Catalunya, next to the French border. The principal grapes here are Macabeo, Garnacha Blanca, Garnacha and Carinena. Roses have been the most popular wine made in this region but new whites and reds are being made now.

The winery, Mas Estela, is owned and operated by Diego and Nuria Soto and their two sons. "Mas Estela" translates as “shooting star.” Vineyards have existed on this property for a very long time though were devastated by Phylloxera. In 1989, the Sotos bought the property, very run down at the time, desiring to create a new winery. Their vineyards are now organic and biodynamic. Their grapes include Chardonnay, Black Garnacha, Syrah, Carinena, Monastrell and Muscat d'Alexandria.

The 2004 Mas Estela Quindals ($18) is made of 90% Red Garnacha, 5% Syrah and 5% Old-vines Carinena. It spent twelve months in French oak and has an alcohol content of 15%. This is an inky dark-colored wine with a nose of dark berries. On the palate, this is a big, powerful wine. There is plenty of dark fruit flavors, like blackberry and plum. There are strong tannins on the long finish so this is a wine that certainly is better with food, especially a good steak or lamb. I think it is a balanced wine with tinges of almost chocolate. This wine reminds me of a big Cabernet yet the taste is different. It has its own unique flavor. If you like big, bold wines, this is a wine for you. Drink & Buy, a good value!
Posted by Richard Auffrey at 6:20 PM

We just visitied this family vineyard November 3rd and it was outstanding. Nuria and Diego are great hosts. The property is gorgeous and the wines are very good indeed.