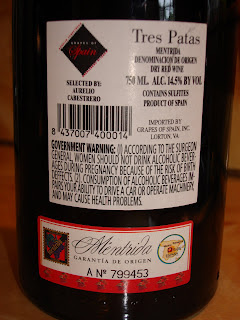 It is fun to explore new and different wine regions, even within a country of which I am generally familiar. The 2004 Canopy Tres Patas (which translates as "three legs") is from the Mentrida D.O. of Spain. I have never had any wines from this region before so was intrigued to taste it and see what this region could deliver.

The Méntrida D.O. covers a small part of the Madrid province and a larger part of the province of Toledo. It is generally divided into three distinct areas: Talavera, Torrijos, and Sagra-Toledo. Most of the vineyards are in the Torrijos area. Wine has been produced here since at least the 16th century. Mentrida acquired its D.O. status on 1976. The region consists of about 24 bodegas.

The climate is continental with extreme temperature variations over the course of the year. Its soils are generally sandy-clay with an average loose consistency. The vineyards are primarily at an altitude of 400 to 600 meters with a few vineyards as high as 800 meters. Their vines are commonly planted mainly as low bushes (en vaso) though some of the newer vineyards have been planted on trellises.

Méntrida produces mostly red wines and 85% of their vineyards are planted with Garnacha. The rest of the vineyards have Cencibel (another name for Tempranillo), Cabernet Sauvignon, Merlot and Syrah. There is also a very small quantity of white varietals such as Albillo, Macabeo, Verdejo, Sauvignon Blanc and Chardonnay.

The 2004 Canopy Tres Patas ($25) is made from 80% Garnacha (0ld vines) and 20% Syrah. Canopy is a new winery, begun in 2004. The wine is a light red in color, reminding me of some light Pinot Noirs. It had bit of a harsh nose at first, though once it was allowed to breath a bit it mellowed. For such a light colored wine, this was a powerful wine. It had intense berry flavors, including some dark cherry. There are some oaky tones and strong tannins which benefited from a pairing with a big steak. It had a fairly long finish with some pepper spices. There was a uniqueness to its overall taste on the palate that set it apart from similar Rhone style wines. Maybe a bit of earthiness.

I enjoyed this wine. It definitely needs to breath for a time before you drink it. Plus, with its strong tannins, you should pair this with food, such as beef or wild game. It is definitely a Drink & Buy.
Posted by Richard Auffrey at 7:38 PM

There are some oaky tones and strong tannins which benefited from a pairing with a big steak. It had a fairly long finish with some pepper spices. There was a uniqueness to its overall taste on the palate that set it apart from similar Rhone style wines. Maybe a bit of earthiness. car seat canopy