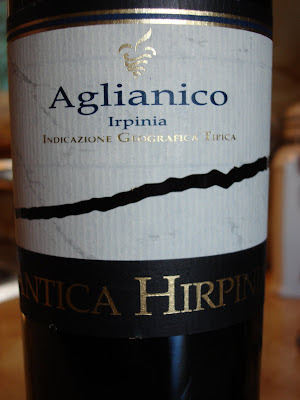 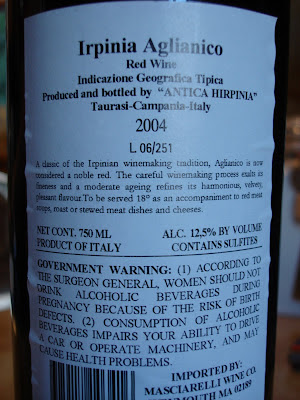 While persuing the new, special issue of Wine & Spirits magazine, titled "Rebels Rock The Best In The World of Wine," I found an article on "Best Rediscoved Varieties" The article describes a number of grapes that have moved out of obscurity and into a more prominent place in the wine world. One of these grapes was Aglianico from Italy. This was especially interesting as I had tasted an Aglianico wine the evening before.

There is some dispute over the origin of Aglianico. Many seem to believe it is on Greek origin, its name derived from the words "hellenico" or "ellenico" which mean "Greek." The grape was known by these names until the end of the 15th century when it became "Aglianico." There is also speculation that it was a grape native to the Campania region of Italy and the Greeks were the first to domesticate the vine.

Aglianico is a thick skinned grape with a deep color. It usually sprouts late, thus avoiding frosts, and if it is harvested prematurely may lead to a strongly tannic wine. Aglianico seems to grow very well in volcanic soils. It has become a major grape in Italy and is sometimes called the "Barolo of the South."

The 2004 Antica Hirpinia Aglianico Irpinia IGT (about $15) comes from the Campania region of Italy. The Irpinia IGT covers an area where the Taurasi and Greco di Tufo DOCGs are located and Taurasi is considered one of the best areas for Aglianico. (Please note that the Antica Hirpania website is only in Italian.) This is their entry level Aglianico, an inexpensive wine that will provide an introduction to this grape. As the wine only has an alcohol content of 12.5%, it is also something you can have a couple glasses of and not feel light-headed.

With Aglianico, it is said that mountain grown grapes have stronger tannins, and thus age better, while lowland grapes are rounder and more forward. Though I do not know where the grapes for this wine were grown, I suspect they might be more mountain grown. The wine is a very dark red in color, nearly purple. On the nose of this wine, I get more of a dried cherry and leather smell. Initially on the palate, it is a bit austere with strong tannins, thus bringing to mind mountain grown Aglianico. There is also some high acidity there too. In addition, it has more dried fruit and ripe plum flavors. It is clearly a wine intended for food, a more traditional Old World wine instead of the more international, fruit forward wines.

I paired the wine with a simple pasta and meatball in a marinara sauce. It is with the food that the wine really came to life. The tannins smoothed out with the food and more of the fruit flavors of the wine came out. I enjoyed it very much with the food. This is a wine you might have at a tasting and initially not like, but if you had it with food you would change your mind. That is something common to many more traditional Italian wines, as well as many other European wines. Wine for them was long an adjunct to food, not a stand alone beverage.

At this price point, the wine is a good value and I would recommend it. It would be interesting as well to taste their higher end wines, to see the true potential of the Aglianico.
Posted by Richard Auffrey at 6:00 AM