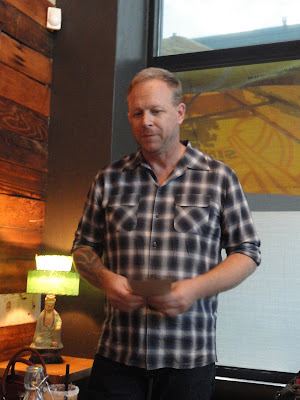 From painting contractor to chef and restaurant owner, including recently being named the James Beard 2011 Best Chef Northwest. That is the life of Andy Ricker, one of Portland's hottest chefs and while I visited Portland, I was able to meet him and dine at two of his restaurants. Based on my experiences, the kudos are well deserved.

While working as a painter, Chef Ricker vacationed in Thailand a few times, eventually becoming enamored with its cuisine. He decided to start studying cooking, wanting to replicate the Thai dishes he had enjoyed. But, the primary difficulty was that some Thai ingredients were not available to him, and substitutes often were lacking, not providing the proper flavors he desired.  But rather than give up, he decided to keep it simple, relying on those Asian ingredients which he could readily source.

In 2005, Andy started Pok Pok, basically a small Thai take-out shack, located just outside his home. It quickly became very popular and because of the increased demand, Andy eventually had to expand, and now Pok Pok is located inside a different house. It has both inside and outside seating, and still is reminiscent of a family backyard barbecue. As the years have passed, Andy has added other restaurants to his growing culinary empire, including Whiskey Lounge and Ping. Yet Pok Pok still remains the crowning jewel. 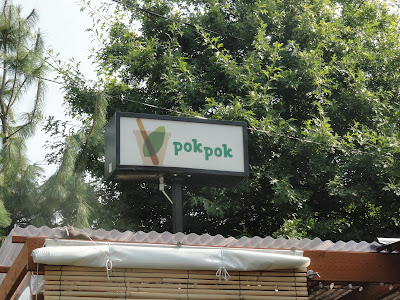 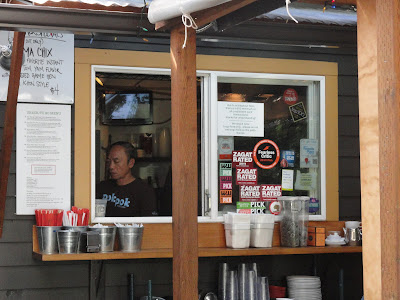 Dewey, of SakeOne, took me out to lunch at Pok Pok, and the restaurant has the the feel to me of a New England clam shack. It once was an actual house and it feels like the outside picnic tables have been set up in the driveway and front yard. Such a homey ambiance, and as the weather was beautiful that day, we chose to sit outside at one of the wooden picnic tables. Pok Pok serves primarily Thai food, though there are a few dishes from other parts of Southeast Asia. You won't find common dishes like Pad Thai on the menu but there is plenty to entice even finicky diners.

Pok Pok serves lunch and dinner, and the menus are fairly similar though the lunch menu is a bit smaller. The menus are separated into four sections, with the same three on both menus: Aahaan Phiseht (house specialties), Aahaan Kap Khao (Food with rice as part of a shared meal) and Aahaan Yaang (charcoal grilled specialties). On the lunch menu there is also Aaahaan Jaan Diaw (one plate meals) and on the dinner menu, Kuaytiaw (noodle dishes). There are many enticing choices, and it was difficult for me to determine which dish I wanted to order. Prices are reasonable with lunch prices generally ranging $9-$12.50 and dinner prices from $9-$14.50. 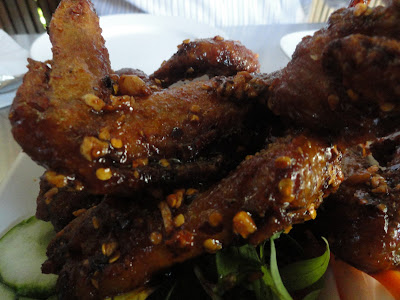 One of their most popular items, and which everyone seems to rave about, is Ike's Vietnamese Fish Sauce Wings ($12.50). Ike is a daytime cook at Pok Pok. The wings are marinated in fish sauce and palm sugar, deep fried, and tossed with caramelized Phu Quoc fish sauce and garlic. We chose to order our wings spicy, and when they arrived they were a vision of poultry beauty, such a nice brown caramelization on the skin and the scent of them was quite alluring. From an aesthetic perspective, this was a compelling dish. The visual promise made good in the taste, such a rich umami driven flavor combined with crispy skin, spicy heat and tender, moist meat which slid off the bones. It was easy to comprehend the addictive popularity of these wings and I eagerly devoured several of them.

I should note that there is no need to fear the "fish sauce." It does not really add a fishy taste to the dish, but rather raises its level of umami, its savoriness. Phu Quoc is also considered by many to be the king of fish sauces, the best of the best. It is actually a versatile sauce, and really elevates the quality of these chicken wings. Maybe more chefs should start considering it as an ingredient in their dishes. 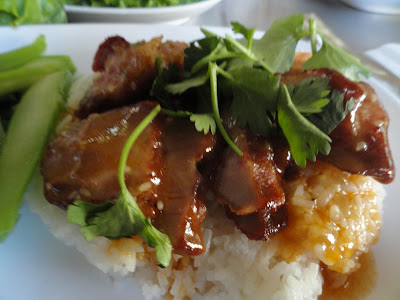 For my main entree, I chose the Khao Muu Daeng/Muu Krob ($9.50), jasmine rice topped by house-made Chinese BBQ red pork and crispy pork belly with a sesame "gravy." Another excellent dish, with very flavorful and tender meat and an interesting sauce that paired well with the pork. The crispy pork belly was especially tasty, adding a nice crunchy texture to the silky meat and fat. Certainly a good choice for all pork lovers. 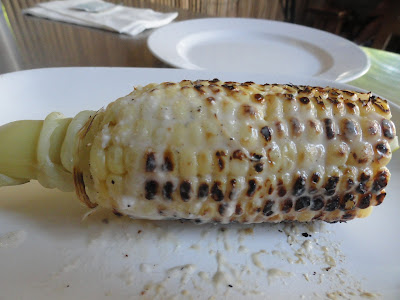 We also had a side of Grilled Corn with salty coconut milk, one of the Specials that day. It was good but not a standout like the other two dishes. To drink, I had a couple of their unique drinking vinegars, where fruit is macerated in vinegar and soda water is later added. The Pineapple was my favorite, and they can be partially thought of as a lightly carbonated fruit juice, low in sweetness and with a slight tartness to them. You don't think of vinegar while sipping it, and they are very refreshing. They certainly would make a nice addition to cocktails, and as they seem only mildly sweet, would not make the cocktail overly so.

My visit impressed me, and when I return to Portland I will definitely come back to Pok Pok. I need to have those wings again! But I soon may not need to travel across country for those wings. I recently learned that Chef Ricker plans to open a chicken wing shack in New York City, and it might open later this year. The menu will be small, mostly wings and some sides, plus they will serve the drinking vinegars.  Great news for those on the East Coast. 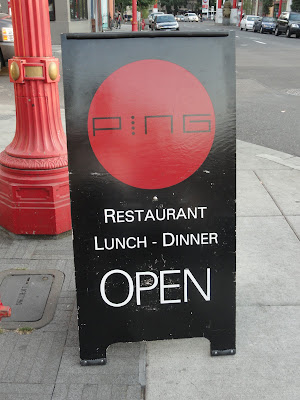 As part of the Travel Oregon press trip, I dined the first night at one of Chef Ricker's newer restaurants, Ping and also got to meet the chef as well. I actually had my choice of a few restaurants that evening, but after perusing Ping's menu, and reading a bit about it, it seemed like the most interesting restaurant to me so I opted for it. "Ping" in Thai means "toast" or "grill," and they do have numerous grilled skewers on their menu. With Ping, Chef Ricker wanted to create a neighborhood place, a place to bring people together. The menu has dishes from many different Southeast Asian countries, but is not a fusion place and all of the dishes have specific origins. They also try to use as much local produce as possible. 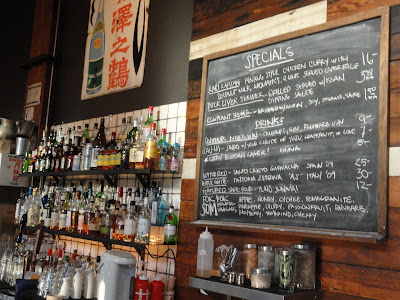 They serve lunch and dinner, including lots of small plates and bar snacks, making this a restaurant where you can easily share with your dining companions, and thus get to try a wide variety of dishes. Prices are very reasonable, and there is only a single dish over $14. On the menu, you will find Grilled Skewers, Steamed dishes, Fried dishes, Boiled dishes, Noodle dishes, Salads, Snacks and Sides. They carry the drinking vinegars like Pok Pok, and use them as well in numerous cocktails. Plus they carry a fair number of shochus and even a few sakes. 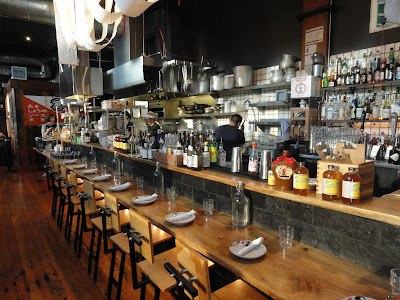 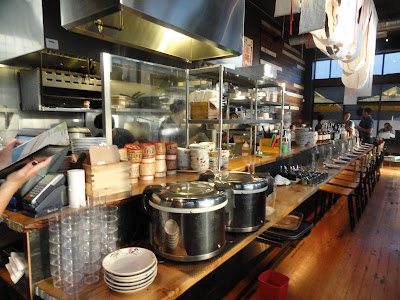 It is a casual place with an eclectic and fun ambiance.  On one back wall, there are numerous old radios, which were salvaged from a radio repair shop that used to be located next door. You can sit at the counter and watch them prepare your food, or choose one of the tables, to be closer to all your friends. 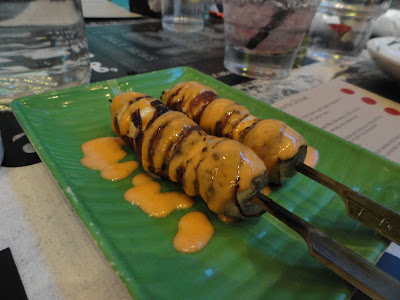 We had a set menu for the evening, a selection of chef chosen dishes from their dinner menu. The evening began with Quail Egg Skewers, local quail eggs wrapped in Carlton Farms bacon with spicy mayo. A pleasant start to the meal, with the salt of the bacon contrasting nicely with the slight heat of the mayo. 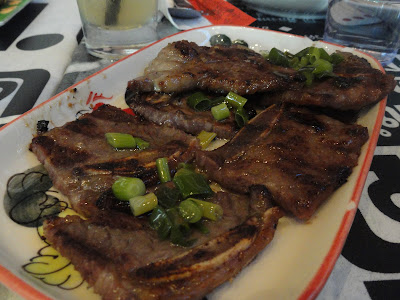 The Vietnamese Style Short Ribs are marinated in fish sauce, lemongrass and garlic & served with scallion oil. The meat was tender and the sauce raised the umami level, with the addition of some delicious garlic notes. 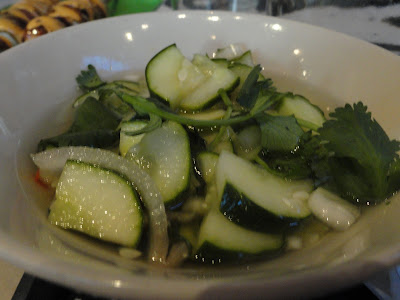 The Cucumber Relish has cucumbers, shallots and chilies in a sweet vinegar dressing, and there was plenty of heat in this dish. But the crisp cucumber and slight sweetness of the dressing helped to counter the spiciness and I felt this was a simple, but very well executed dish. An addictive side dish. 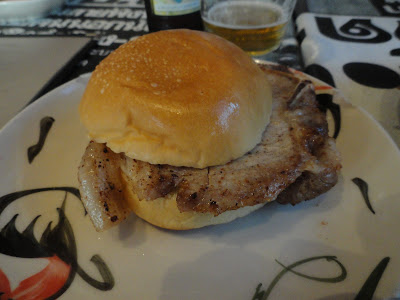 The next dish was equally as simple, but also quite tasty. The Ju Pa Bao is a Macanese style pork chop bun, which uses a Tails & Trottters pork loin chop, in pork fat, and served on a soft roll. What a delicious sandwich, with flavorful and tender pork on a very fresh roll. Served naked as it was, it needed no additional condiments to make it delicious. It stood on its own and shined forth. Pure porcine pleasure. 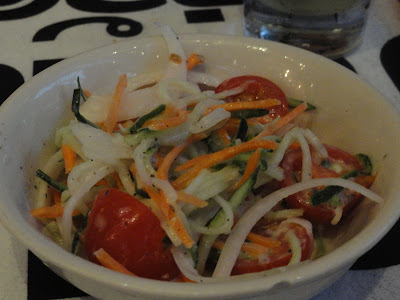 We then moved on to a light dish, the Poisson Cru, which is a Tahitian style ceviche with local rock fish, onions, carrots, thai chili, cucumber, tomato and coconut milk. Fresh, crisp vegetables with a creamy dressing and flaky fish. 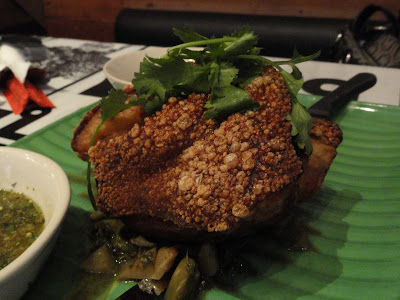 Then the giant arrived, the Kha Muu Thawt. This is a deep fried Carlton Farms pork shank, Thai German style, with stewed mustard greens and sour chili dipping sauce. This is one of their few fusion dishes and it is exceptional. The shank was cooked perfectly, with a very crisp, thick skin, atop a layer of silky fat and covering the juicy meat that easily came off the bone. The skin alone would have satisfied me, but the combination of it all was carnivore heaven. This was quite a large hunk of meat and a dish I would highly recommend. 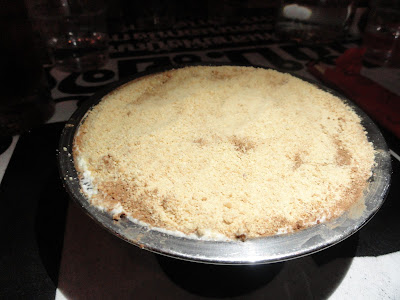 For dessert, I had Serradura with local peaches, a Macanese "sawdust" pudding. It is a condensed milk/whipped cream pudding with ground cookies and holy kakow cocoa powder. By this point, I was fairly well full so was only able to eat a small portion of this, but it was tasty, with a creamy filling. 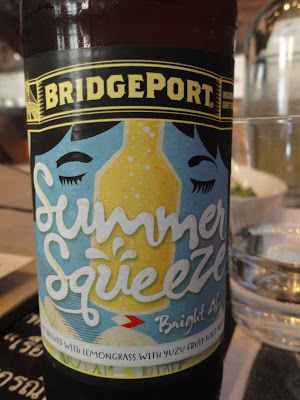 We had a few drinks paired with our meal, and most of them appealed to me. It was also interesting to see cocktails, rather than wine, paired with several of the courses. We began with a beer, and one which I actually found palatable, the Bridgeport Brewing Summer Squeeze. Bridgeport is supposed to be the oldest brewery in Oregon and this brew is a pale ale flavored with lemongrass and yuzu. It was very light with prominent citrus flavors, and though I didn't love it, it was something I could drink (which says a lot since it is a beer).

Two of their cocktails impressed me though. The Krogstad Cooler is made from Krogstad Aqua Vit (made in Portland), cucumber, lime, triple sec, and celery drinking vinegar. The typical carroway seed flavor of aquavit was very subdued, and this was more a savory and herbal drink, refreshing and bright. The Shochu cocktail had House Spirits Shochu, red potato drinking vinegar, and soda and was a stronger flavored drink, with more earthiness to it. At the end of the night, I also ordered some iced Teh Tarik, a Malaysian "pulled" tea. The "pulling" refers to the pouring process. The unsweetened black iced tea was quite good, with an exotic taste to it, some kind of herb or herbs I couldn't identify.

Like Pok Pok, Ping also gets my recommendation. Neither is your typical American Thai or Southeast Asian restaurant and Chef Ricker should be applauded for bringing these flavors and dishes to Portland. I can't wait for his wings to come to New York City.

Posted by Richard Auffrey at 4:01 AM

I'm in Rome so I have to go and get on a plane to come there, it all looks too delicious!!!

Awesome photos! I recently conducted an interview with Andy Ricker for the Find Dining podcast. I thought you might enjoy it.