Chateau La Nerthe: All About the Blends

"...nowadays, a good host's cellar must be full, above all with wines from Margaux, Haut Brion, Romanee Conti, La Nerthe..."
--Alexandre Dumas, 19th century French author of The Count of Monte Cristo and The Three Musketeers 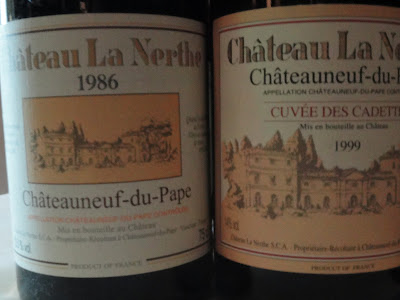 The history of Chateau La Nerthe, located in the Châteauneuf-du-Pape region, extends back to at least 1560, though there is some evidence that it might even be older than that. It was one of first vineyards affected by the destructive phylloxera but also was one of first to replant. On the property, there are caves, over 500 years old, which have been built deep into the stone and are still used by the current owners. There is a real sense of history here.

In 1986, the Richard family, which has been involved in the wine trade since 1892, purchased the estate. The Richard family also owns two other wineries in the Southern Rhone Valley, Domaine de la Renjarde and Prieure de Montezargues.  Chateau Nerthe has about 90 hectares of vineyards, compiled into a single vineyard surrounding the property. The vineyard has been certified organic since 1998, and they grow all thirteen of the legally permitted grapes in Châteauneuf-du-Pape, though grenache dominates, at about 64% of the vineyard.  The vines average about 40 years old and the winery produces approximately 20,000 cases a year, 10% being white wines. All of their wines are blends, and the winery is very traditional, using only cork. 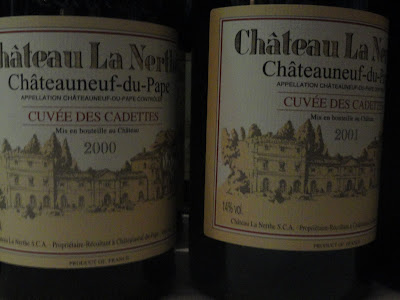 I recently attended a media luncheon at L'Espalier, showcasing the wines of Chateau La Nerthe, which are imported to the U.S. by Pasternak Wine Imports. Christophe Bristiel, the export manager for Chateau La Nerthe, led the discussion on the ten wines we would taste. It was a spectacular event, with some top notch wines, albeit pricey. You probably will not find any of these wines for under $50 (except the Rosé), and the older releases will run you over $400. But, if you can afford it, or are up for a splurge, these wines will impress.

We began the afternoon with a glass of 2010 Prieure de Montezargues Tavel Rosé ($18-$20), a blend of 8 grapes, including 55% Grenache (red & white), 30% Cinsault, 13% Clairette, and 2% Others (Syrah, Mourvedre, Carignan & Bourboulanc). The Rosé was produced through pressing and it underwent stainless steel fermentation and then a short term of aging on the lees. Christophe stated that the terroir of Tavel and Châteauneuf-du-Pape are similar in many respects, and that Tavel is the king of Rosé, rivaling that of Provence. This wine was a darker pink than many Provence Rosés, with a crisp, dry and elegant flair, and delicious tastes of cherry, strawberry, and grapefruit. There were even mild hints of earthiness on the lengthy finish. A killer Rosé which should be consumed year round. 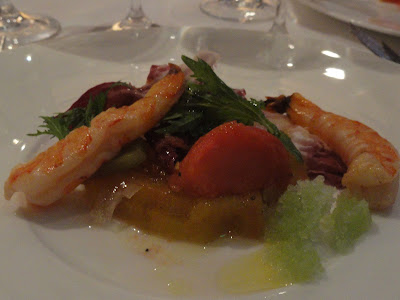 Our lunch began with a course of Fisherman's Daughter shrimp with Apple Street Farm heirloom tomatoes and cucumber ice with basil seed "caviar." To accompany this dish, we had two white wines, one more fruit driven and the other more spice dominant.

The 2010 Chateau La Nerthe Châteauneuf-du-Pape Blanc is a blend of 44% Grenache, 39% Roussanne, 11% Clairette, and 6% Bourboulenc. The Grenache and Bourboulenc were fermented in stainless steel while the Roussanne & Clairette, both old vines, were fermented in neutral oak barrels. The grapes for this wine are picked according to maturity level and terroir, the Roussanne usually picked first. I loved the fruity aroma of this wine, and that great fruit followed through on my palate as well, including peach, melon, grapefruit and hints of lime. It had a clean, fresh taste with a underlying backbone of minerality and good acidity. A very compelling and complex wine, it would be a great match for seafood and light chicken dishes. I easily could have gone through an entire bottle of this wine.

The 2009 Chateau La Nerthe Châteauneuf-du-Pape Blanc "Clos de Beauvenir" is only a blend of 60% Roussanne and 40% Clairette 40%, both old vines that were co-fermented and aged in new oak barrels for about nine months. In 1560, the original country-house that eventually became Chateau de Nerthe was known as Grange de Beauvenir, and thus the name of this wine. These grapes are a field blend, on a plot that is less than 2 hectares. This is a more full-bodied and richer wine than the other Blanc, with flavors of orange marmalade, Asian pear, and spice dominating. It still possesses good acidity but has more of a creamy texture in some respects. It would work with some richer dishes, such as maybe something with a cream sauce.  Which of the two Blancs you will like better is merely a matter of preference. 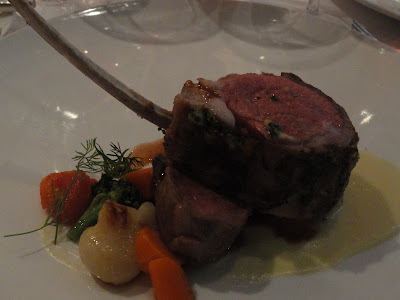 The 1982 Chateau La Nerthe Châteauneuf-du-Pape Rouge was produced before the Richard family bought the Chateau in 1985, thus they don't have complete information on this wine. They are unsure of the exact blend but believe it has about 70-85% Syrah. This is an old style wine, from an excellent vintage, that was fermented in old stone tanks and aged in very large oak barrels. It was also a sublime wine, and my favorite of the luncheon. It was elegant and delicate, silky smooth and complex, more floral with very subdued red fruit flavors. It lingered long in your mouth, and seduced your palate throughout.  Interestingly, the second bottle that was opened tasted even fruitier than the first.  This is a perfect example of some of the best of Châteauneuf-du-Pape.

The 1986 and 2001 are similar in many ways, being a blend of all 13 grapes permitted in this region, including: Grenache, Cinsault, Syrah, Mourvedre, Muscardin, Camarese (or Vaccares), Counoise, Picpoul, Clairette, Bourboulenc, Terret Noir, Roussane, and Picarden. The vineyards are field blends though, so they do not know the exact percentage of their blend and frankly, do not care to know the exact numbers. The blend is everything to them.  They know some basics, that about 55% of the blend is Grenache, 20-25% Syrah, 10-15% Mourvedre, and the rest are the other ten grapes. Many of the vines are old, often averaging 55 years, and they harvest by plot. Their goal is to create complex, elegant and balanced wines rather than powerful and extracted wines.

On average, during the last thirty years, they have picked their grapes one day earlier each year. This is due to climate change and they expect it to continue.  Thus, they feel that some of the less common grapes may become more important in the future, as they often have greater acidity and are more late ripening. Their grapes, not the wine, are certified organic by Ecocert. They experimented a bit with Biodynamics on 5 hectares but never fully completed the experiment.  As they have a large estate, going Biodynamic would add lots of work, and a greatly increased rick during bad vintages so they have little motivation to move toward Biodynamic.

The 1986 Chateau La Nerthe Châteauneuf-du-Pape Rouge did not show very well, and there is a possibility I had an off bottle, something of which the person sitting next to me at lunch agreed. The 2001 Chateau La Nerthe Châteauneuf-du-Pape Rouge though impressed.  This was an excellent vintage, and the wine was elegant and complex. The red fruit flavors were bright, with accompanying earthy and herbal notes, creating an intriguing melange of tastes. The tannins were well integrated, the finish was lengthy and pleasing, and  it should age very well. It was a fine accompaniment to the lamb, and indicative of the high quality the Richard family has brought to Chateau La Nerthe.

For dessert, there was a Cheese course, a very typical French custom. With the different cheeses, we were served three reds, a vertical of 1999-2001 Châteauneuf-du-Pape Rouge Cuvee des Cadettes, all three being very good vintages.  This wine is a blend of only three grapes, Grenache, Syrah and Mourvedre. The 1 hectare of Grenache, which was planted in 1893, may be the oldest Grenache in all of France. The plants look like small bonsai trees and provide very low yields. Both the Syrah and Mourvedre are also old vines. The wine is aged in new oak for an average of 22 months and gets release two vintages later than the regular Rouge line. 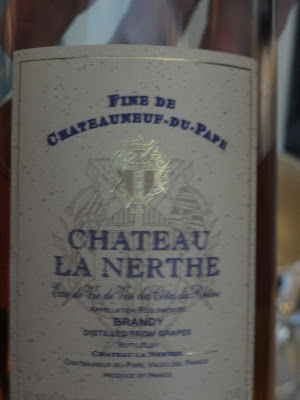 To complete the tasting, we got the rare opportunity to taste the 1995 Fin de la Nerthe, an eau de vie (a French expression that means "water of life"). There may only be one other Châteauneuf du Pape producer making this product, and La Nerthe is reviving an old tradition. A white wine was used as the base, it underwent a 3 stage distillation process and was matured in large oak barrels for about 15 years. It is rarely  made, usually only for their own consumption, and after 1995, the next vintage produced will be 2010. It reminded me of cognac, being very aromatic and with a fairly smooth and flavorful taste. There was a slight alcoholic bite on the finish, but it made for a soothing after-dinner drink.

When is the last time a Châteauneuf-du-Pape wine impressed you?
Posted by Richard Auffrey at 9:19 AM

Man, you are so lucky! sounds like a terrific meal with great wines, all ably described by yourself...