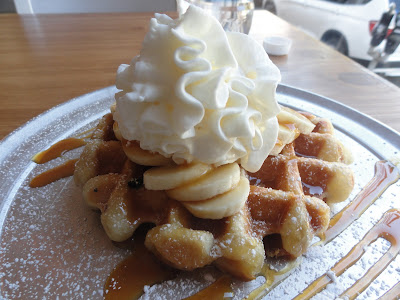 There isn't a single Filipino restaurant in Boston or Cambridge, but there are at least two places where you can obtain Belgium Liège waffles!

I previously ate at Saus, located near Fanueil Hall, enjoying their Liège waffle with a salted caramel sauce and I now have tried the version at Zinneken's in Harvard Square, with caramel, bananas and whipped cream (pictured above).

The Zenne is a river that flows through Brussels in Belgium, and which has largely been covered over within the city. In the middle ages, the stray dogs that used to congregate near the river became known as Zenneke or Zinneke. Over time, the term Zinneke started to refer to "someone of mixed origins," reflecting the cosmopolitan nature of the residents.

Though we often refer to "Belgium waffle" as if it were a singular entity, there are actually a few different types of waffles in Belgium, including Brussels, Liège and stroopwafel. Most breakfast joints that serve Belgium waffles serve what would be closer to a Brussels waffle, a lighter, fluffier waffle. Saus and Zinneken's serve something different, the Liège waffle, supposedly invented in the 18th century. These waffles tend to be denser, chewier and sweeter than Brussels waffles. They also contain bits of pearl sugar which caramelize on the outside of the waffle.

Zinneken's, founded by Nhon Ma and Bertrand Lempkowicz, is a small, casual restaurant which primarily serves just Liège waffles, with your choice of toppings. Waffles cost about $4.70, with $1 for a fruit topping, $0.50 for a non-fruit topping, $2.30 for a scoop of ice cream. This was more expensive than Saus, whose waffle was $3.50, and the waffles appear to be about the same size. When you order your waffle, it is prepared to order so you are guaranteed of having a hot, fresh waffle.

There were plenty of bananas atop my waffle, though the whipped cream did not seem as if it were homemade. And there was the dreaded powdered sugar, which I forget to ask to be omittted. My mistake, though they were not heavy handed with the powdered sugar. As for taste, it passed on all levels, and was properly crisp, chewy and sweet, without being overly so. For a sweet dessert, this would be an excellent choice, albeit pricier than Saus though that slight price difference would not be a significant factor in my return here. And I will go back to check out more of their waffles.

Posted by Richard Auffrey at 4:10 AM