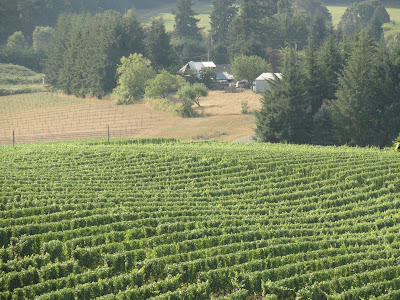 "Only somebody who really takes the time to understand Pinot's potential can then coax it into its fullest expression. Then, I mean, oh its flavors, they're just the most haunting and brilliant and thrilling and subtle and... ancient on the planet."
--Miles in Sideways

Oregon is often seen as an excellent region for Pinot Noir, and it is with that grape that it has made much of its reputation. As of 2010, there were about 419 wineries in Oregon and approximately 20,500 acres planted with grapes. This acreage is divided into about 850 vineyards, with an average size of 22 acres. About 60% of those vineyards, 12,406 acres, have been planted with Pinot Noir. The second most planted grape, Pinot Gris, is only on 2747 acres while the third most planted grape is Chardonnay, on just 950 acres. About 72 grape varieties are grown in Oregon, though the majority are very small plantings.

About 75% of the vineyards are planted in the Willamette Valley, especially in the north section, where cool climate grapes do best. Vineyards in the rest of Oregon often have more warmer climate grapes. Prime vineyard land sells for about $30,000-$40,000 per acre. Interestingly, approximately 29% of their vineyards are certified Sustainable, Organic or Biodynamic. Last year, Oregon sold almost 2 million cases of wine, though many of the individual producers are small, each selling less than 5000 cases per year. About 40%-60% of the wine is sold outside of Oregon. As an aside, Oregon is also the largest U.S. producer of hazelnuts 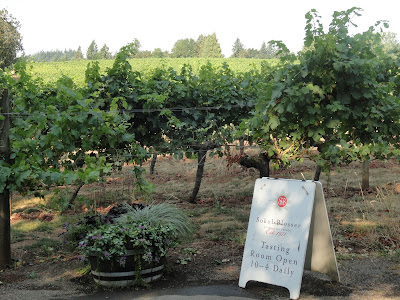 The wine industry in Oregon extends back over 150 years, and the first certified winery was established in 1850. But, the industry largely languished for about 100 years, with little of much significance, until the 1960s. It was during the 1960s that the first Pinot Noir was planted and the modern wine industry began. During the Travel Oregon press trip, we had the opportunity to meet four pioneer wineries, including Ponzi Vineyards, Bethel Heights Vineyard, Sokol Blosser Winery, and Eyrie Vineyards. In addition, we got to meet some of the second generation of these wineries, those taking on the mantle of these pioneers. It was a relatively short visit so we did not have the opportunity to really get in depth with the winemakers. 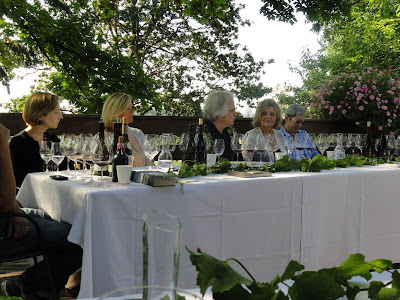 The oldest of the four wineries is Eyrie Vineyards, which was established in 1966 by David and Diana Lett in the Dundee Hills. They are true pioneers, having planted the first Pinot Noir in the Willamette Valley as well as the first Pinot Gris in the U.S. David felt, correctly, that cool climate grapes would do very well in this region. Their first vintage was 1970, which included five cases of Pinot Gris, and their current annual production is about 10,000 cases of wine. We did not meet David or Diana, but met their son, Jason Lett, who became their winemaker in 2005.

It was noted that many of the pioneer wineries did not keep library wines due to economic issues, but the second generations of these wineries have been more attentive to maintaining library wines. Eyrie Vineyards though is an exception, and did keep many of their older wines.  Jason also mentioned at one point that there is some controversy in Oregon over what are proper facilities for a winery, such as whether they should have a restaurant, wedding facilities, stores, or such.

Ponzi Vineyards was founded in 1970 by Dick and Nancy Ponzi, and their first vintage was in 1974, having released their first Pinot Noir in 1976. They currently own about 120 acres in the Chehalem Mountains AVA. We got to meet Nancy, as well as Maria, one of the second generation of Ponzi. Nancy noted that it is a very collaborative region, where the wine makers are very friendly towards each other. 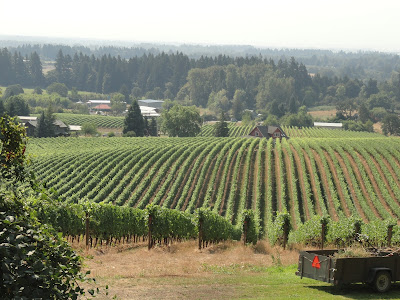 Sokol Blosser Winery was established in 1971 by Bill Blosser and Susan Sokol Blosser in the Dundee Hills. Their vineyards are certified Organic, and the winery is devoted to numerous sustainable initiatives. We met Susan Sokol Blosser, as well as her daughter, the second generation, Alison Sokol Blosser. Susan noted how Oregon has the country's strictest label laws, and they were self-imposed by the wineries of Oregon.

Bethel Heights Vineyard first planted vines in 1977 in the Eola-Amity Hills AVA. Twins, Ted and Terry Casteel, and their partners, Pat Dudley and Marilyn Webb established the winery and produced their first commercial wine in 1984. They now have about 49 acres of vineyards and produce about 12,000 cases annually. They make only estate grown wines which are certified sustainable. We met Pat Dudley who mentioned that one of the keys to success of Pinot Noir in Oregon is the extended growing season, as Pinot needs plenty of sunlight. 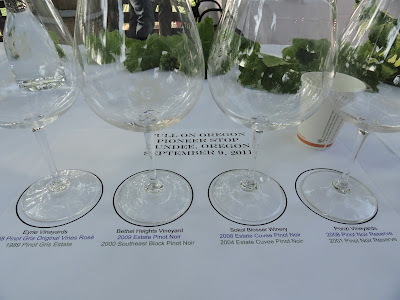 We tasted eight wines, including one older wine and one newer wine from each of the four wineries. Six of those wines were Pinot Noirs, and it was interesting to see the stylistic differences between the different wineries. They have more in common with Burgundy than California Pinot, yet still possess their own unique character. These wineries have had 30-40 years to understand their terroir, to know their grapes, to perfect their wine making. Where will the second generation take these wineries? How will they change the wines, if at all? Only time will tell. 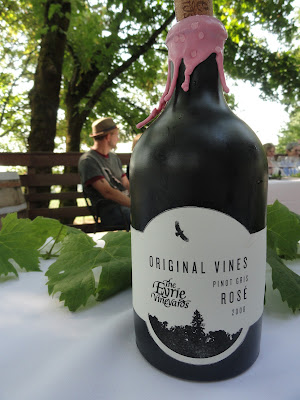 Both wines from Eyrie Vineyards very much impressed me, and they have motivated me to seek out their other wines. It was a special treat to taste the 1989 Eyrie Vineyards Estate Pinot Gris. A 22 year old white wine from Oregon? Yes, and it was an intriguing and delicious wine.  It was a rich yellow in color with tinges of amber. The nose had appealing aromas of honey and dried fruits, and on the palate you could taste that honey and dried fruit, accompanied by spicy undertones. It was complex, still retained good acidity and the finish was long and pleasing. With more time in the glass, there surfaced some toast and almost buttery popcorn notes. This is definitely a wine to slowly savor, reveling in each sublime sip.

The 2008 Pinot Gris Original Vines Rosé (pictured above) has not been released yet but we got to taste a barrel sample. Only 25 cases were made, and it was produced through maceration on the skins. The wine, made from old vine Pinot Gris, has spent over three years in the barrel and will be released in the near future. It will be released in a unique clay bottle, which has plastic at the top resembling melted wax. This wine resembles a Provence style rosé, very soft and elegant, with subtle strawberry and cherry flavors, and a bit of minerality. A very pleasant wine, perfect for a summer day. 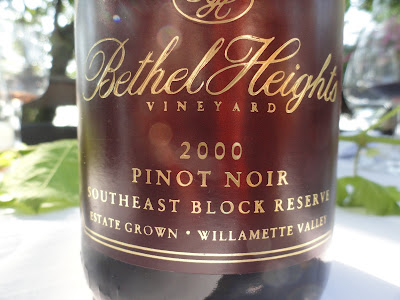 Out of the six Pinots, my clear favorite was the 2000 Bethel Heights Southeast Block Reserve Pinot Noir. I could sat there all day sipping some of this superb wine. It was a fascinating and complex melange of earthiness, spice, floral and subtle red fruit tastes. All of the flavors were well balanced, and it was a smooth and elegant wine that lingered long in my mouth. It reminded me of a fine Burgundy and would please any Pinot lover. The 2009 Bethel Heights Estate Pinot Noir was also good, a similar style to the 2000, though still young and not as complex. It is a more accessible Pinot for the average consumer, and would be good for an every day Pinot. I have long been a fan of Bethel Heights, though hadn't tasted many recently. This tasting reminded me of why I once loved their wines so much, and that I need to drink more.

This was an interesting preview to the Oregon wine industry, a chance to interact a bit with some of the original wine pioneers of the region. It showcased some of the different styles of Pinot Noir that are available, as well as indicating some of the versatility of Pinot Gris. It was a sampling that whetted my appetite for next year's Wine Blogger's Conference, when I will get the chance to taste many more Oregon wines.
Posted by Richard Auffrey at 4:00 AM

Hi Richard! I’m envious of your Pinot Noir tasting lineup :) and great write up to boot.. How was the ’89 tasting? One thing for sure is that Oregon Pinot is worth cellaring.

On a side note, there is great contention on who planted the first Pinot Noir in Willamette Valley. I prefer to stay out of the debate but I’d recommend this read http://tinyurl.com/3kdv8f7 as well as the comments. I’ll end this by quoting a comment from the post, “What came first the chicken or the egg? …The fact is we love PN, we share it with others and they love it too.”

Looking forward to seeing you at WBC!

Hi Pam,
Thanks! And thanks for sending me the link about that debate, as I was unaware of it. It certainly adds a new dimension to the issue and I can understand the different viewpoints of the discussion. No matter the origin, Oregon Pinot Noir does shine.

Look forward to seeing you at the WBC as well. Take care!