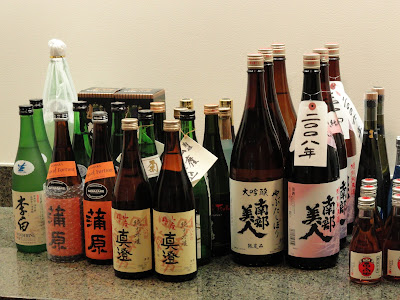 Two days ago, it was International Sake Day and I partially celebrated by tweeting a deluge of information and trivia about Sake. I used the opportunity of Sake Day to educate people about Sake, an under appreciated, exciting & delicious drink. I believe I was successful as I received numerous positive comments and thanks for my tweets.

So this once again raises a question I addressed a month ago, Do We Need Grape Days? My own thought was that the lesser known grapes, wines and drinks are more in need of a special day than such common ones like Cabernet and Chardonnay. Those lesser known ones often are under appreciated and need champions to promote them. People should learn about those grapes and wines, to broaden their horizons and knowledge base. Sake fits that category and many know little about it, so I tried to teach people about it, to give them reasons to want to try Sake.

But events like Cabernet Day and Chardonnay Day were not specifically intended to be educational. I raised the question whether they were merely marketing ploys and in the comments to my prior post, Rick Bakas denied such and stated that: "If you think Cabernet Day is about promoting Cab Franc and Cab Sauv, it's not. It's about community. It's about challenging traditional wine media publications to show how we too can reach and influence wine drinkers on a large scale just like they can. This is new media vs. traditional media."

So, events like Sake Day apparently have a different purpose, to educate and promote something that many people have not yet embraced. It is still very much about community, especially in creating a greater community for these less common beverages, yet the end goals are a bit different. Though I also see events like Sake Day as a challenge to traditional wine magazines too, just on a different level.

The mainstream wine media often marginalizes these wines, rarely covering them. That is where bloggers can step in, and give much more coverage to these worthy wines which inhabit the shadows. Let us show how the blogger community can bring these wines to the light, and accomplish something that the wine magazines do not. That would show the power of the new media.

I inquired as to whether Rick had ever participated in Sake Day before, though he never answered that question. Rick did state in his comments: "If you think you can do it better, step up and do it. I'll support your efforts." Well, though I was not trying to do it better, I did promote and support Sake Day once again this year, but I am unaware of anything Rick did to support Sake Day. So consider me somewhat disillusioned with Rick's desire for "community," unless he is the one to organize the specific grape day. And that only makes me less motivated to support his grape days.

I love Sake for it's beauty, purity, complexity, subtlety, diversity, history, savoriness, culture, & simple deliciousness. I want more people to drink it, to experience its wonders, to promote and support it. To do that, more education is necessary, and I am doing my part in that regard. That is the same situation with many other under appreciated drinks, from Sherry to Greek wines. People need to learn the wonders of these fine drinks, to comprehend the reasons why some people do love these wines so much.
Posted by Richard Auffrey at 4:00 AM

I was out of the country with little access to internet during the time of Sake day and didn't really know there was an event. What did you organize for Sake "day"?

BTW, I still stand by my statement. Step up and do something and I'll support you.

I'll uphold my end of the bargain if you do as well. Stepping up means you actually have to do something like organize an event or put a structure around it. I didn't see that.

Ranting is easy. Doing is much harder.

The thought that occurs to me with the abundance of socially-oriented virtual wine events is that there really is a small community we are dealing with here. I don't jump on anything on a regular basis and miss so many events because I have my own thing going on.

Do we really have a community or lots of little communities of one that only overlap when our non-virtual relationships connect us?

Rick, the promise in your second comment is meaningless as you already broke it the first time you made it.

Your first comment, indicating your ignorance of Sake Day, is very telling. In my original rant a month ago, I mentioned my support of Sake Day since 2008 (longer than Cabernet Day has existed). During the past month, I have blogged about Sake Day, posted it on Facebook & Tweeted about it. Obviously you pay little, if any, attention to what I say & post or you would have been aware of it. So, no matter what you promised, your failure to pay attention to me ensured you could not live up to your promise.

I will grant you being away on Oct. 1, Sake Day, but that does not absolve you from the past month. At the very least, you could have retweeted me on Sake Day. Yet you could not even do that little. You had an easy bar to pass, but you still failed.

Making excuses is very easy, but doing something is much harder.

Hey Jason:
I think it is a bit split, that at times people act as if a single community, and other times it breaks down into small cliques. I guess it depends in part of the topic, the event, and people involved. Obviously, no one can participate in every online/offline event. But if one makes a promise, one should hold to it.

On a side tangent, ever since we rearranged our sake section in a progressive style like our wine it's been impossible to keep the area fully stocked. We are flying through it! So sake is alive in well in Chestnut Hill. Come check out how we changed it around next time you're in our neck of the woods.