Spirits & Cocktails in Portland, OR

As an alternative to the wines of Oregon, from Pinot Noir to Pinot Gris, you'll find other alcoholic beverages to entice you in Portland and the surrounding regions. There are numerous spirit distilleries and artisan breweries in the area, producing a diverse selection of beverages, from vodka to rum, from gin to grappa. One of the most famous is the Clear Creek Distillery, which makes a unique line-up of brandies, eau de vies, grappas and fruit liquors. I have tried some of their eau de vies before and was impressed with their quality.

Though I did not get to visit their distillery on my Travel Oregon trip, I did find a way to visit another local distillery, House Spirits Distillery. It is located on Distillery Row, an area in southeast Portland which is the home to six artisan distilleries. I hope that on any future trips to Portland, I will have the opportunity to visit some of these other distilleries and try more of the local spirits. 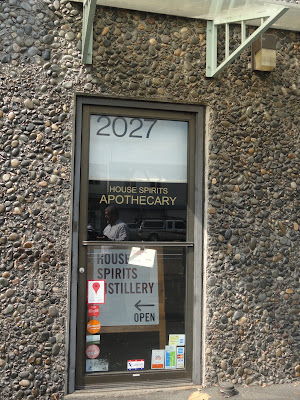 After visiting the SakeOne brewery, Dewey took me by for a tour of the House Spirits Distillery, an artisan distillery that was established in 2004. The distillery is open to the public for tours and tasting every day except Mondays. They currently only produce 6000-7000 cases annually, which includes all of their different spirits. But, they have been sustaining significant growth each year of about 50%, and hope to double their production next year. Their best markets include California, Washington and New York, though their spirits are available in Massachusetts too. 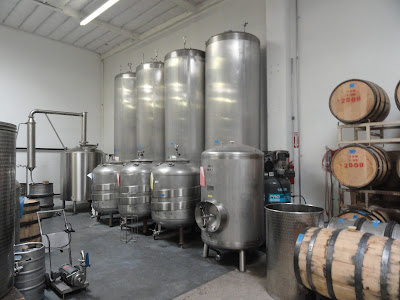 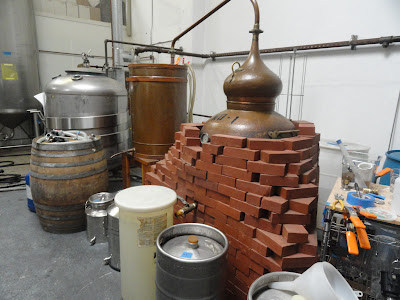 I met Christian Krogstad, one of the founders of the distillery, and he gave me a tour of their place and later a tasting of a few of their products. They own two units for distilling, one old and one new, and produce a variety of spirits including gin, rum, whiskey and aquavit. They also have an experimental line of spirits where they try out various unique products. On the day that I was there, they were making whiskey. They use the mash tun of other brewers, and then ferment in house, finally distilling it twice. They own numerous oak barrels, which are used primarily for their whiskey, but sometimes for their rum and aquavit. 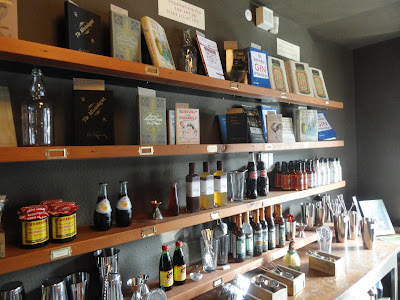 Their tasting room, in a separate room adjacent to the distillery, is also part museum, with a collection of old bottles and cocktail books. 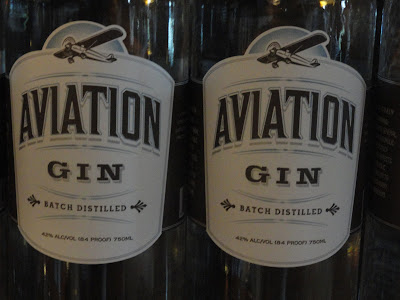 I tasted three of their spirits, and I was tentative about the first of the three, Aviation Gin (about $30). I am generally not a fan of gin, finding the juniper flavor too overpowering. But this gin did not possess the usual flavor profile. It is said to be a "new western dry gin" style and more like the original Dutch Genever. It possesses a melange of botanicals, including Juniper, Cardamom, Coriander, Lavender, Anise Seed, Sarsaparilla and dried Sweet Orange Peel. All of these flavors elevate this gin above the norm, and give it a smooth taste with herbal and spice notes. Plus, the juniper is very subdued and does not dominate the flavor profile. It has a clean, pure taste which would be fine on its own or within a cocktail. This is one of the few gins that I would actually enjoy drinking. 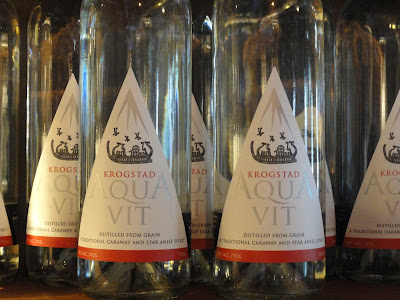 Next up was the Krogstad Aquavit (about $30), a traditional Scandinavian spirit, often flavored with caraway seed. I had previously tasted this Aquavit in a cocktail at Ping but now I got to taste it on its own. I have tasted other aquavits so I knew basically what I would encounter. This aquavit is flavored with caraway and star anise, and tastes fairly mellow, except there is a slight burn on the finish. It has a very strong caraway flavor, with underlying notes of other spices, and I could drink it on its own, though I would prefer it in a cocktail. Not everyone will like the caraway flavor profile, but in a cocktail that can be lessened. 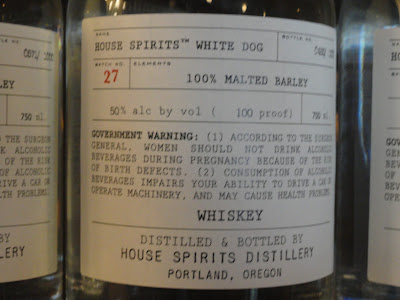 I ended with their White Dog Whiskey, Batch #27, which is made from 100% malted barley and is 100 proof. It is an unaged white whiskey, what is sometimes considered to be an unfinished whiskey. The barrels provide color, taste and smoothness to whiskey, and this whiskey, that has not seen a barrel is potent and fierce, with an intriguing herbal taste, though it is not for the faint at heart. White whiskeys have become more popular and this seems as if it would be one of the better ones.

So, look for the House Spirits label, and taste the quality of artisan spirits in Portland. 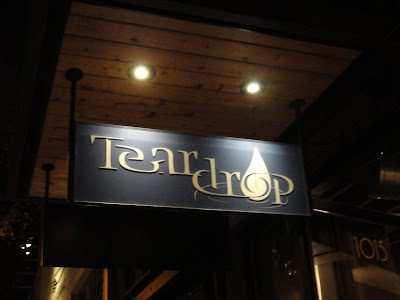 One evening after dinner, a number of writers and others chose to stop at the Teardrop Cocktail Lounge, in the Pearl District, for a cocktail. This is clearly a high-end, craft cocktail lounge with a true passion for artisan workmanship. They use local produce, fresh ingredients, natural sugars and produce their own specialty liqueurs, syrups, digestifs, vermouths, bitters and tinctures. Besides the cocktails, they also sell wine, beer and sake. 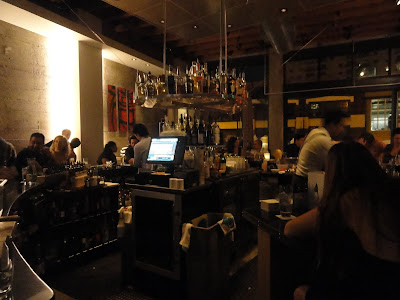 Their cocktail menu is extensive, each costing about $9-$13, which is reasonable considering prices at similar places. Their menu lists some of the sources for their cocktails, such as providing the name and date of an old cocktail recipe book. The cocktails are creative, even when the recipe is well known.  Based on a couple recommendations, I chose the Pina Colada, made with Don Q Silver Rum, pineapple juice, pineapple gomme, house cream of coconut, lime, and nutmeg. It was delicious, with a rich coconut flavor as well as bright pineapple flavors. It had a freshness to it, which in retrospect makes other Pina Coladas seem a bit dull. I very much enjoyed this drink.

I would have liked to try more of their innovative concoctions, and hope to do so on my next trip to Portland. If you love cocktails, I strongly recommend you check out the Teardrop.
Posted by Richard Auffrey at 4:00 AM