How does Portland, Oregon, fare with its baked goods? Well, I have four examples which illustrate that Portland seems to be doing very well in this regard. Only one of these destinations was pre-planned and I essentially stumbled upon the others and decided to take a chance. There are plenty of other places in Portland to find tasty baked goods, but these recommendations will give you a starting place for your explorations of the Portland culinary scene. 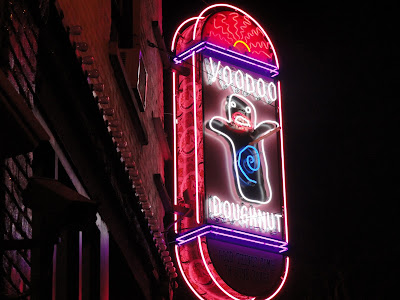 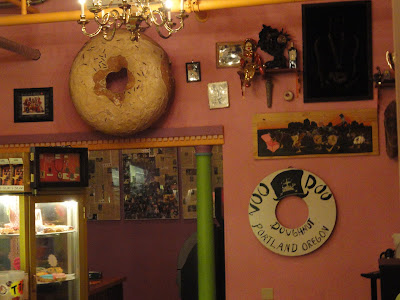 Before I left for Portland, I knew about the famed Voodoo Donuts, but was curious whether it was more hype than anything else. When I posed that question on Twitter though, the vast majority said it was not just hype and recommended that I check it out. So, on a Thursday evening, at about 9pm, a small group of us stopped by Voodoo Donuts and got in line. A line at a donut shop at 9pm? That seems crazy and I have never seen such a line at that hour at Dunkin Donuts or Honeydew Donuts. But are the donuts worth the wait?

Voodoo Donuts makes plenty of regular style donuts but also makes a diverse selection of funkier treats, from Captain my Captain (raised yeast doughnut with vanilla frosting and Captain Crunch) to the Memphis Mafia (fried dough with banana chunks and cinnamon sugar covered in a glaze with chocolate frosting, peanut butter, peanuts and chocolate chips on top). They even have a full line of Vegan donuts. Donuts cost at least about a dollar, and the exact price depends on the type of donut.

One of their most popular items is the Bacon Maple Bar (raised yeast doughnut with maple frosting and bacon on top), and of course I needed to try it. There were two strips of crisp bacon atop the donut, and it certainly added to the enjoyment of the donut. It may have had a bit too much maple flavor for my own preference, but the donut itself was light and fresh. I also tried the Chocolate Coconut (chocolate cake doughnut with chocolate frosting and flake coconut) and it was delicious, very fresh with a rich chocolate and plenty of coconut. Definitely one of the better donuts I have tasted.

Yes, Voodoo Donuts is worth a visit, and it is generally open 24/7, so is a perfect place to stop at any time, such as for a late night snack after a night of drinking, when I suspect the line might be even longer.

Unfortunately, Voodoo Donuts was a bit of a distance from my hotel so I couldn't quickly walk there in a minute or two in the morning. But there was another donut shop very close to my hotel, an independent place called Coco Donuts. It makes more traditional donuts and pastries, nothing funky like you find at Voodoo Donuts, and they generally cost $0.90-$1.25. It is a small shop, though with a few tables and a counter where you can sit and eat.

I stopped here a couple times and was very pleased with their donuts, all very fresh, light and tasty. Glazed, chocolate frosted and a cinnamon roll. These are the delicious type of donuts which you cannot find at the large chain donut stores. There was no line to get into the shop, and it may not have the pizzazz of Voodoo Donuts, but if you just want a tasty, fresh-made donut, then stop here. 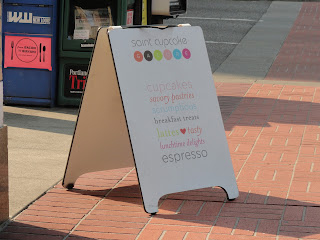 Another cupcake bakery? Yes, I am tired of the cupcake craze and would like to see something else take center stage, like Whoopie Pies. But, I still find it still difficult to pass by a bakery without stopping by to check it out. Thus, when I was out wandering the streets of Portland, I had to stop at Saint Cupcake when I encountered it and I was glad that I did. 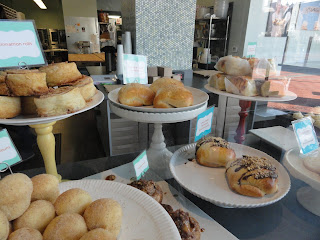 Saint Cupcake, which opened in December 2005, is owned by Matt and Jami Curl. Prior to its opening, Jami had been making cupcakes and other baked goods as a sidejob. Now she can indulge her baking desires as a full time operation. The store sells a variety of items, which are all natural, including cupcakes, vegan cupcakes, cookies, scones, sticky buns, brioche, cinnamon rolls and much more. Everything certainly looked very enticing. 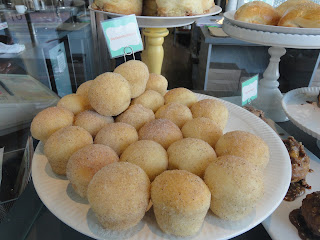 These are Bonbonbunbuns, buttery brioche dough hand-tossed in a secret mixture of sugar and spice deliciousness. Why the strange name? Well, they were actually named by Jami’s 4-year old son, Theo. To me, they resemble a donut muffin, light, with just the right amount of sweetness. You could easily pop a dozen of these in your mouth, one right after another, and still want more. 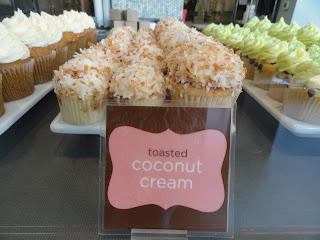 I had to try a cupcake and decided on the Toasted Coconut Cream, a vanilla cupcake with toffee chips baked right in, and topped with a vanilla cream cheese icing and hand toasted coconut flakes. The cupcake was properly moist, and the frosting was not overly sweet. The frosting was very creamy and there was plenty of coconut, adding to the taste of the cupcake. As cupcake quality goes, this places near the top.

My only caveat is that the baked goods here are a bit pricey, though on par with other high-end cupcake bakeries.

After drinking sake at Zilla Sake, my companions and I stopped next door at the Random Order Coffeehouse & Bakery. I later realized that I had previously read some excellent press about their pies. They serve a variety of items, including breakfast, sandwiches, pot pies, soups, salads, and more. All it took though was for me to peruse their front glass case and see all of their alluring pies, from pecan pie to apple. They looked homemade, and I had to try at least one and decided on the Coconut Cream Pie, one of my favorite pies.

I later that night ate the pie in my hotel room, and it was scrumptious, creamy and filled with plenty of sweet coconut flavor. The crust was flaky and light, with a buttery taste that added to the overall flavor. A clear winner that made me sorry I had not bought slices of a few of the other different pies there. But I hope to stop there again and try the others, especially the pecan pie.

Posted by Richard Auffrey at 10:03 AM

This post is really making me crave sweets for breakfast. Thanks for sharing a bite of that maple bacon bar in Portland!