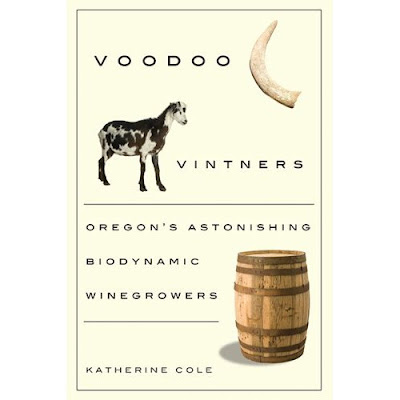 According to the Biodynamic calendar, today is a "Flower" day, which means that it is supposed to be a good day to drink wine. In addition, if you drink a wine today, it should show more floral and perfume characteristics rather than fruit flavors. But, as I have mentioned before, I am skeptical of certain aspects of Biodynamics, particularly the more esoteric elements such as which days are supposedly better to drink wine.

The first official event of my Portland press trip was a Welcome Reception, which included a wine tasting with Katherine Cole, the author of Voodoo Vintners: Oregon's Astonishing Biodynamic Winegrowers ($18.95). Her book is a 182 page, trade paperback that was published by Oregon State University Press in June 2011. It is a very approachable look at Biodynamics, especially as it is practiced by wineries in Oregon. 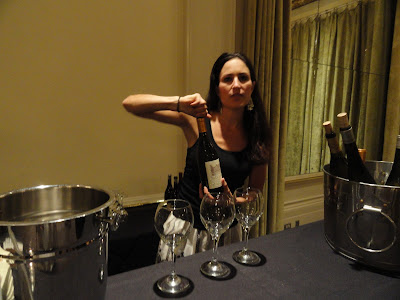 Katherine is a wine columnist for The Oregonian newspaper and MIX magazine, and her work has been published in other periodicals as well. She holds degrees from Harvard College and the Columbia University Graduate School of Journalism. I found Katherine to be very personable, knowledgeable and passionate about wine. For the tasting, Katherine chose six Biodynamic and organic wines from Oregon (and one from Washington) for us to try, and I had the chance to chat with her a bit during the reception. Near the end of the event, Katherine also gave me a review copy of her book, which I had not read yet though it was on my list of books which I wanted to check out.

Oregon has a long history of sustainable agriculture and is even the center for Demeter USA, the Biodynamic certification organization. Interestingly though, only about 5% of Oregon vineyards are certified Biodynamic, and there may be only another 1.5% which practice Biodynamic agriculture yet are not certified. So, it is still a fringe practice, though continuing to slowly increase each year. In addition, Oregon probably has a higher proportion of Biodynamic vineyards than any other U.S. wine region. Most of the Biodynamic practitioners in Oregon do not embrace its more esoteric elements, generally remaining more practical, but there are exceptions. 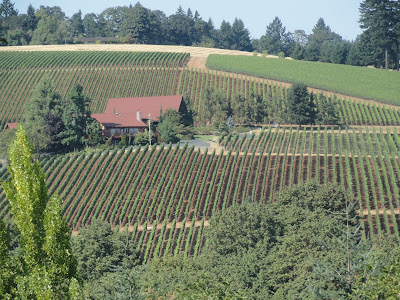 I enjoyed Voodoo Vintners and felt that it was an easy and engaging read, accessible to wine lovers of all knowledge levels. Biodynamics can be a very confusing topic (just try reading one of Nicolas Joly's books) but Katherine presents it in a manner that is easily understood by all. She covers the history of Biodynamics, including its use in Burgundy, and also presents fascinating stories of numerous Oregonian wine makers. These tales add to the enjoyment of this book.

For example, you'll learn of Moe Momtazi, an Iranian who had studied civil engineering and eventually fled his own country after Khomeni came to power.  Moe ended up in Oregon and decided to establish a winery, recalling memories of his grandfather and father who had made wine when he was a youth. "Moe" is even a Persian term which means "grape leaf" or "grape vine."  You'll read about Kevin Chambers of Resonance Vineyards who uses a "radionic field broadcaster," also called a "cosmic pipe," in his vineyard. You'll also discover Dr. Robert Gross, a physician who owned an Oregon winery and was the first to practice Biodynamics. Even if you are not as interested in Biodynamics, the tales of these wine makers and others are likely to appeal to you.

Katherine tries to present a more balanced view of Biodynamics, alternately praising certain elements while being skeptical of other aspects. Though, it seems that her positives outweigh the negatives.  It is obvious she has great respect for those vineyard owners taking the more difficult task, seeking a closer connection to the natural world. She also delves into the complexities of Rudolf Steiner, both the positive and negative, while tracing elements of Biodynamics to the Paleolithic era. The book is unlikely to persuade anyone of the efficacy of Biodynamics, but that is not its intent. It is more an overview of the topic, combined with compelling stories about local winemakers. It succeeds very well at that goal and is a very worthy read.

If you have an interest in Biodynamics or Oregon wines, check out Voodoo Vintners. 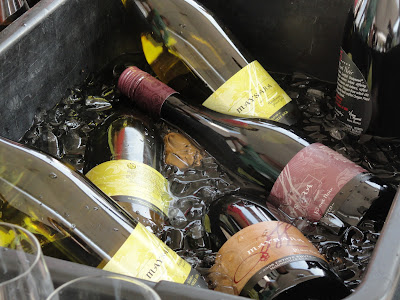 The six wines poured at the reception, and chosen by Katherine, were from Brick Yard Vineyards, Francis Tannahill, and Johan Vineyards. My two favorites of the evening were both from Francis Tannahill, a winery founded in 2001 by Cheryl Francis and Sam Tannahill, both accomplished wine makers. For this endeavor, they purchase their grapes, and not all of those grapes are Biodynamic though they do strive for at least organic and sustainable grapes. In addition, they source some of their grapes from Washington.

The 2008 Francis Tannahill Dragonfly Gewürztraminer ($20-$25) is produced with fruit from the Dragonfly Vineyard located in White Salmon, Washington. The vineyard was planted in 1962 and may be the oldest Gewürztraminer in the Northwest region.  The five acre vineyard is organic and only 373 cases of this wine were produced. The nose of this wine was very compelling, strong and aromatic, and its taste was a complex melange of exotic spice and tropical fruit. It was dry, well balanced, and possessed a lengthy and pleasing finish. A superb example of Gewürztraminer.

The 2008 Francis Tannahill The Hermit Pinot Noir (about $40) is a blend of Pinot grapes from several different Willamette Valley vineyards. It is very Burgundian in style, with earthiness on both the nose and palate. It is a more elegant and complex wine with subdued red fruit flavors, good acidity and a long and satisfying finish. This is my preferred style of Pinot Noir and I think they produced an excellent wine, which I would highly recommend. 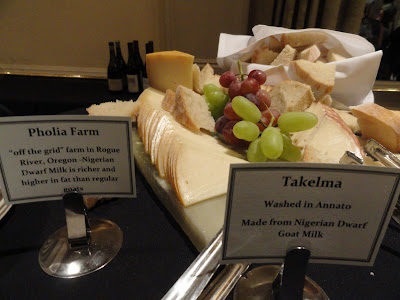 To accompany the wine, there was a delicious cheese from Pholia Farm, which was made from Nigerian Dwarf goat milk. Pholia is a small family farm, which uses solar power, and they produce only goat related  products. Nigerian Dwarf goats are a newer breed, different from Pygmy goats, and have only been recognized by the American Goat Society since the 1980's. The Nigerian goats produce more milk than Pygmys, are easier to breed and make for a tame pet. This is the first time I have had a cheese made from this milk and it was compelling. We tasted their Takelma, a semi-soft, raw milk goat cheese that had been aged for 70-90 days and the rind had been washed with annatto. It had a nice creamy texture with a bit of a grassy/herbal taste.

"But I hope this book also expresses my admiration of all the Oregonians who toil in the vineyard and tinker in the cellar, no matter what style of winegrowing they are practicing."
--Katherine Cole.
Posted by Richard Auffrey at 4:00 AM

I think we might have 1 biodynamic winery here in Illinois, but it's a start.

I think you have a better taste for wine on a fruit day...