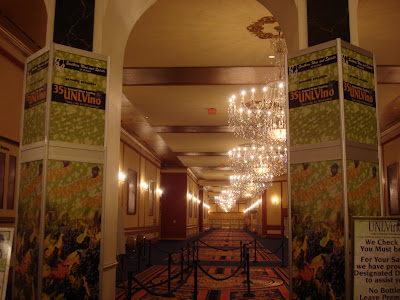 What happens in Vegas, stays in Vegas.

Well, I am going to break that rule a little, sharing some of my recent Vegas experiences. But don't get all excited, thinking you are going to hear a bunch of salacious stories. I am only going to share my food and drink experiences with you. The rest of what I did will remain confidential, as it should.

Last year, I attended the 34th Annual UNLVino Wine Tasting and I had such a good time that I decided to return this year, to their 35th Annual Event. The Grand Tasting event was once again held at the Paris Las Vegas Hotel, which is a good venue for the event. I entered during the trade hours, when it was quieter, so I had plenty of time to check out the many wines available. Though even when the public entered, it was not as busy as last year. I heard that ticket sales had been 50% less this year, an effect of the rough economy.

The event was set up a bit differently than the previous year. The entry room contained the auction area at the back, and there were a few vendors on the side walls. The tasting room was quite large, though I believe smaller than last year, yet there still were over 1000 wines available for tasting. As last year, there was plenty of space between the different rows of tables, making it feel far less crowded.

Once again, the selection of available wines was generally comparable to that of the Boston Wine Expo, except that the UNLVino had more high end wines available. There was also plentiful food available, more than just cheese and crackers. Besides the main food tables, there were a few restaurant vendors scattered about, offering samples. For example, Koi Restaurant offered an extremely delicious tuna tartare atop wonton crisps. 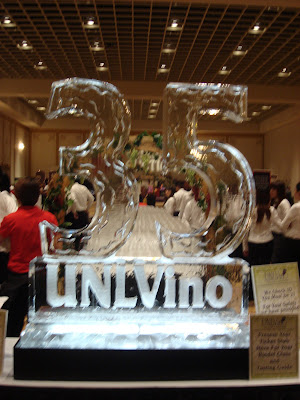 One of the things that really impressed me about this event is that they really showcase Saké, more than most other grand wine tastings. There were seven tables of Saké, all situated in a line against the back wall. It is great to see so many people being exposed to the delights of Saké. I tasted many and will be posting a number of Saké reviews in the near future.

I attended the auction, which was divided into a silent auction and a live auction, as I usually enjoy such auctions. There were a total of fifty items available, a number of which were primarily for locals such as restaurant gift certificates and winery visits. But I did find one item of interest, three bottles of Mizbasho Sparkling Pure Saké. I had tried this in the tasting room and was very impressed with it. I ended up being the only person who bid on them, so I got them for an excellent price. I'll tell you more about this Saké in the near future.

In addition, I will be posting numerous other wine reviews soon. As well as the review of a special drink that really impressed me, but also was a bit of a disappointment. Stay tuned for all of it.

I should also mention one more intriguing aspect of this event, an artist, Jessica Galindo, who was displaying some of her artwork. I was drawn to her heart-related works, finding them both evocative and compelling. From speaking with Jessica, her passion was clear and she is very personable and charming. I think she is quite talented and I highly recommend that you check out her work on her website. I purchased one of her paintings and may buy more in the future.

I hope to head back to Vegas next year for the 36th edition of UNLVino and I recommend that other wine lovers check it out as well.
Posted by Richard Auffrey at 6:00 AM

This is a nice blog.