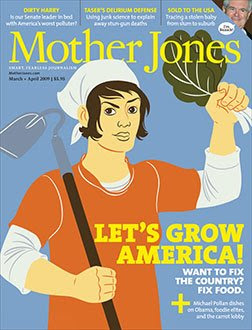 To better understand this controversy, you might want to read a new article in Mother Jones (April 2009) titled Spoiled: Organic and Local Is So 2008 and written by Paul Roberts. Roberts is a journalist and author who writes and lectures often on "the complex interplay of economics, technology, and the natural world." His articles have appeared in a wide assortment of magazines and newspapers and he has also appeared on numerous television news shows. His two books include The End of Oil and The End of Food.

A good summary of the article is: "Nearly everyone agrees that we need new methods that produce more higher-quality calories using fewer resources, such as water or energy, and accruing fewer "externals," such as pollution or unfair labor practices. Where the consensus fails is over what should replace the bad old industrial system. It's not that we lack enthusiasm—activist foodies represent one of the most potent market forces on the planet. Unfortunately, a lot of that conscientious buying power is directed toward conceptions of sustainable food that may be out of date."

First, we should understand that Roberts is truly concerned about sustainability and the future of food in our world. But he questions whether some of the current solutions to our problems will be sufficient. In general, he feels some solutions won't work on the large scale while others focus too narrowly on a single issue or will only work in limited cases. What contributes to these problems is a desire by too many people for quick and easy solutions, ignoring the complexities of the issues.

Roberts states that transportation only accounts for one-tenth of a food product's greenhouse gas emissions. So what is probably more important is how that food was produced, its "resource intensity." Some foods, including meat and cheese, require a significant number of resources, no matter where it is produced. Thus, by avoiding those foods, you can have a greater ecological impact. A 2008 report from the Carnegie Mellon University concluded that if you skipped meat and dairy for a single day each week, it would have more of an ecological benefit than if you ate locally every day.

Ever hear of poop miles? Roberts mentions how some organic producers, to cater to increased demand, have had to import manure, which might have come from quite a distance. Yet are those "poop" miles considered in the sustainability of that organic farm or its carbon footprint? Most people probably don't have a clue about this matter. These consumers may think they are doing well by buying local, yet the impact on the environment is much bigger than they realize.

As our society has grown more urban, it has led to the growth of the "industrial agribusiness model." It has also been due partly to our great population of about 6.7 billion people. Roberts believes that organic farming would have an extremely difficult time catering to those billions of people. Currently, industrial organic agriculture makes up less than 3% of the US food supply. Sustainable agriculture is possible, though it likely will require an expansion of the definition of sustainable practices. Eating local may be good in a number of ways but alone it is insufficient to cater to the entire's worlds needs, especially in areas like Asia and Africa.

Roberts calls for a more pragmatic and sensible approach to sustainability. We should not be seeking perfection, but rather start working now for practical approaches to alleviate our problems as well as possible. We must understand that sustainable food products constitute only about 2% percent of our food supply. A significant factor in this is that consumer demand remains relatively low. The immediate issue of the cost of sustainable foods often outweighs other concerns for these individuals.

This article raises many important and significant questions about sustainability. It also shows that the issue is far more complex than many people think. Plus, it indicates that far too many consumers are not concerned enough about sustainability, and that the price of food is an important reason for that mentality.

I have also been reading Roberts' book, The End of Food. It expands upon much which is within this article and I highly recommend it to anyone concerned about sustainability issues. Once I finish reading the book, I will do a full review of it in the near future.

Let us continue a dialogue about sustainability, to educate others about its significance. And let us not blindly follow a mantra of "eat local." Let us instead seek out sensible sustainability, measures that will help reduce our problems and which may have an enhanced chance of success.

Addendum 4/8/09: You might also want to check out an article in today's Boston Globe called Meat Me Halfway. It touches on a few of the issues in my post, including resource intensity, especially concerning meat.
Posted by Richard Auffrey at 6:01 AM