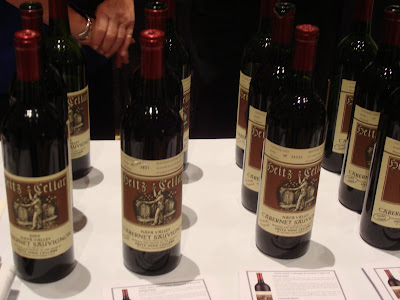 One of the first wine tables I stopped at while at the UNLVino grand tasting belonged to Heitz Wine Cellars. The winery was established in 1961 by Joe and Alice Heitz. At the time, there were less than 20 wineries in Napa Valley so they were kind of pioneers. The winery is located in Spring Valley in the eastern hills of St. Helena. Currently, the second generation, Kathleen Heitz Myers and David Heitz, operate the winery.

Heitz practices organic and sustainable agriculture. "Today at Heitz Wine Cellars, we are proud to be conscientious stewards of the land, working to preserve the Napa Valley winemaking heritage for generations to come." (Kathleen Heitz Myers) They also limit their production, planning to make no more than 40,000 cases annually. Quality not quantity is one of their objectives.

I had the chance to taste their Chardonnay and four different Cabernet Sauvignons. All five wines were quite good, albeit the Cabernets are not cheap.

The 2007 Heitz Cellars Chardonnay ($20) is made from 100% Chardonnay and has been aged for about four months in 40% new French oak. It does not undergo malolactic fermentation. The idea behind this wine is to allow the fruit to shine forth, rather than conceal it behind too much oak. I think they succeeded.

The Chardonnay had an alluring nose of citrus, especially some lemon and grapefruit. The citrus flavors came forward in the taste as well, though there was also flavors of green apple and melon. The fruit was dominant, with only a touch of oak providing some body and a light cream to the wine. It was crisp and had a fairly lengthy finish. This is the style of Chardonnay I prefer and I very much enjoyed this wine. For the price, this is a good buy, especially considering the complexity of its taste, and its lush fruit flavors.

The 2004 Heitz Cellar Cabernet Sauvignon, Napa Valley ($42) is made from 100% Cabernet Sauvignon and spends three years in oak (1 year in American oak, 2 years in French oak). This wine had a light red color and nice red fruit smell, some cherry and raspberry. On the palate, there were bright red fruit flavors with a hint of spice. The tannins were mild and it had a moderately long and smooth finish. In some respects, this reminded me of a silky Pinot Noir rather than a heartier Cabernet. It could easily be drank on its own, though would pair well with food too. Though I enjoyed this Cabernet, I think it is a bit pricey for what you get.

The 2004 Heitz Cellars Bella Oaks Vineyard Cabernet Sauvignon ($65) is made from 100% Cabernet Sauvignon and spends three and a half years in oak (1 year in American oak, 2.5 years in French oak). This vineyard consists of about 18 acres in the Rutherford district. This wine was a darker red color than the first Cabernet and had a more intense nose, with darker red fruit smells. On the palate, there were lush and complex flavors of black cherry and plum with spicy undertones. It was a very smooth wine, with restrained tannins, and a lengthy and satisfying finish. This was a silky and hedonistic wine that really impressed me. It would please either with or without food. This is a wine I think is worth its higher price.

We move on to a different vineyard. The 2003 Heitz Cellars Trailside Vineyard Cabernet Sauvignon ($85) is made from 100% Cabernet Sauvignon and spends three and a half years in oak (1 year in American oak, 2.5 years in French oak). This vineyard is also located in the Rutherford district so you might expect it would be similar to the Bella Oaks but that was not the case. This was a drier wine, with stronger tannins, so I would drink this most often with food. It had complex flavors, with intense dark berry flavors, some leather and much more prominent spice than the Bella Oaks. Its finish was lengthy, with an even spicier flair. I enjoyed this wine, though it was very different from the Bella Oaks. This is the wine I would pair with a fine steak, savoring sips between bites. The Bella Oaks would be something I would enjoy alone, sipping slowly with company, conversing between sips.

Finally, I had the top of their line, the 2004 Heitz Cellars Martha's Vineyard Cabernet Sauvignon ($150). This is made from 100% Cabernet Sauvignon and spends three and a half years in oak (1 year in American oak, 2.5 years in French oak). This vineyard consists of about 34 acres in the Oakville district, near the Mayacamas foothills. The vineyard also grows a proprietary Cabernet Sauvignon clone that is well known for small berries with a concentrated flavor.

This was a very dark wine, a rich purple color, with an alluring nose of violets, black cherry, blackberry, and spice. A very intriguing smell that beckons you to just sit and enjoy the aroma. The tannins were more moderate in this wine than the Trailside and the fruit, especially black cherry and plum, seemed a bit more lush and bright. There was plenty of spice as well, though well integrated with the rest of the flavors. Everything seemed to work in a harmonious structure. providing an elegant and refined wine. This is a wine that you can probably cellar for quite a time and I bet the changes it undergoes over the years will be quite remarkable. Yes, it is the priciest wine of the group but should not disappoint if you are willing to make the splurge.

The Heitz wines were generally impressive and if you are seeking a higher end California Cabernet, they they are worth checking out. Plus, I think their Chardonnay is a good value, a Chardonnay that is not concealed by an overabundance of oak. Though starting off the UNLVino tasting with such good wines really set the bar high for the rest of the tasting.
Posted by Richard Auffrey at 6:00 AM