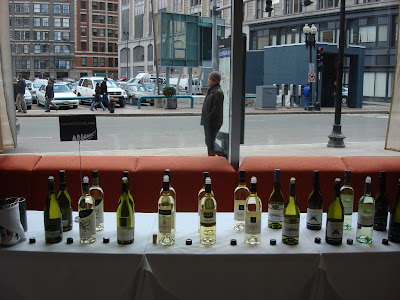 Though I have previously tasted numerous New Zealand wines, I actually have had few of them during the last couple years. This is mainly due to my time being taken up with explorations of other wine regions. So I was particularly excited to attend a special New Zealand Wine Showcase recently held at BiNA Osteria in Boston. I was very curious as to the current state of New Zealand wines.

There were over 75 wines available for tasting, from Sauvignon Blanc to Pinot Noir, from Chardonnay to Syrah. The wines were organized by grape and you were able to pour your own wine. This made the tasting convenient, and you could proceed at your own pace, tasting only what you wished.

Though that also meant you usually did not have someone to tell you about the wine or answer your questions. Fortunately, there were a few people around, representing some of the wines, and they were willing to explain more. Attendees also received an informative booklet about the New Zealand wine industry with plenty of information on their grapes and wine regions. 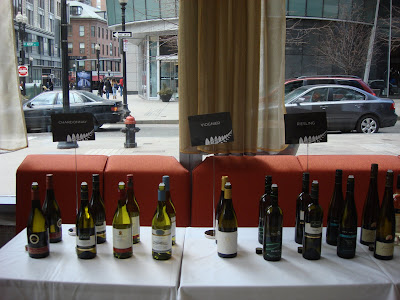 As there were so many wines available, I only tasted a portion of them. But I think I tasted a representative sample of what was there. Overall, I found plenty of solid wines, good tasting ones that were worth their price. Generally, I did not find overpriced their wines so if you buy a New Zealand wine, you will likely get what you pay for. But I failed to find any "wow" wines, something that would dazzle me. There were definitely some interesting wines there, just nothing spectacular.

From the tasting, it was easy to see that New Zealand wines generally have their own unique style. Though there are obviously differences in their wines, you will find many commonalities as well. For example, most of their Sauvignon Blancs have a grassy smell and taste which appeals to many. It was interesting though to get to taste a number of such wines, to see the differences, sometimes subtle, between them despite their common elements. 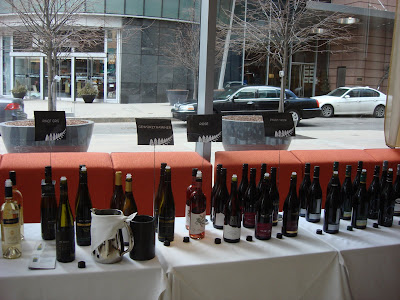 Let me highlight some of the wines that most appealed to me.
2008 Palliser Sauvignon Blanc, Martinborough ($18.99): I freely admit that I generally do not care for New Zealand Sauvignon Blancs as I am not a fan of their grassy flavor. It is just a matter of personal preference and I have plenty of friends who do enjoy that style. But I did like this wine. It had a very pale yellow color, almost clear. It had an interesting nose and on the palate there was a nice blend of light grass, citrus fruit and some minerality. Crisp, nice finish and well balanced.
2008 Te Mara Pinot Gris, Central Otago ($24.00): This was a delightful wine with a nice fruity nose. Those lush fruit flavors came out on the palate as well, some melon, pear and orange peel. Touches of minerality added to the taste. Nice acidity with a long and satisfying finish. Only 656 cases were made and they are currently looking for a local distributor. I hope they find one. I did get to try their Pinot Noir as well and it too was quite good.
2007 Felton Road Riesling, Central Otago ($27.00): A very good dry Riesling with green apple flavors. A crisp wine with a long finish. 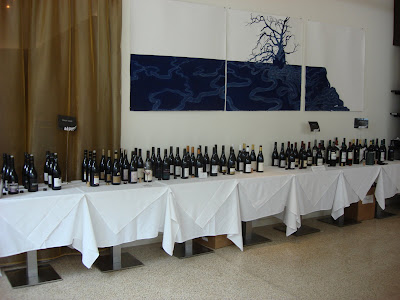 There were plenty of Pinot Noirs to taste and here were some of my favorites. It was good to find three that cost under $20 as good Pinots at that price point can be hard to find.

2007 Saint Clair Vicar's Choice Pinot Noir, Marlborough ($18.00): Good red fruit flavors and some nice spice notes. A light colored wine with a light body feel. This is a Pinot that could pair well with seafood.

2007 Oyster Bay Pinot Noir, Marlborough ($18.99): This is a more fruit forward style Pinot but goes beyond that. It has nice character, especially for the price.

2007 Nobilo Icon Pinot Noir, Marlborough ($19.99): This was a bit darker in color and more full bodied. It was a meatier wine with good red fruit flavors as well as an earthiness to it. Plenty of complexity and a nice, long finish. It reminded me more of a Burgundy.

2007 Palliser Estate Pinot Noir, Martinborough ($28.00): This was another Pinot that reminded me of a good Burgundy. It had an earthier style with subtle red fruit flavors. It was not as full bodied as the Nobilo.

2006 Trinity Hill "The Gimblett" Merlot/Cabernet Sauvignon, Hawke's Bay ($29.99): I previously enjoyed a few different Trinity Hill wines, but it has been a couple years since I have drank any. I am going to have to start drinking them again as they are quite good. This wine was silky smooth, with lush dark plum and black cherry flavors. It had a nice structure, good complexity, and a lengthy and satisfying finish. The tannins were restrained. 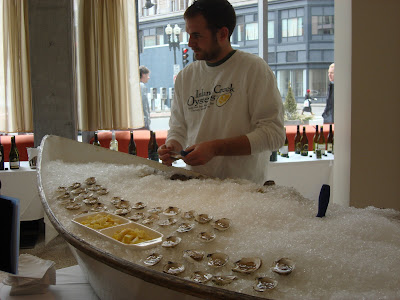 Besides the cheese and meats provided by BiNA Osteria, there was also a boatload (literally!) of Island Creek Oysters. These happen to be one of my favorite types of oysters, with a delectable briny flavor. If you enjoy oysters, you should seek these out.

Overall, I enjoyed this tasting and it was good to see that New Zealand is producing plenty of good wines at all price points.
Posted by Richard Auffrey at 6:00 AM

Rich, I tasted through every single one of the roughly two dozen Sauvignon Blancs at that tasting. I believe it was the St. Clair Sauvignon Blanc that stood out for me as actually being something a little different. It was a little softer with a wonderfully perfumy nose that really allowed it to stand out for me.

It's gorgeous in Martinborough and I'm still amazed to find myself living in paradise. I blog about it at 'Moon Over Martinborough' here: http://martinborough.wordpress.com/