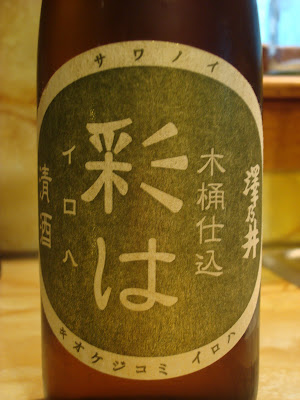 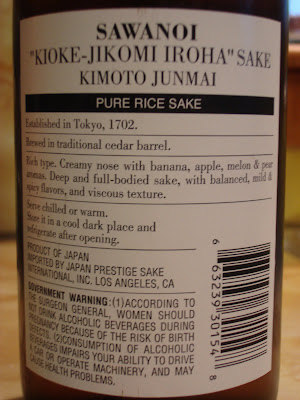 Time to open another new Saké, one of those I purchased from Sakaya in New York City. I found this one to be rather unique, a compelling blend of complex flavors, and I was really pleased with it.

The Sawanoi "Kioke-Jikomi Iroha" Junmai Kimoto ($52.99-720ml) is made by the Owaza Shuzo brewery (founded in 1702) from the Kanto region of the Tokyo Prefecture. The Saké's name translates as "Fountain of Tokyo." It was made from Nojouho rice, that was polished to 65%. This Saké has an alcohol content of 15.5% and a Saké Meter Value of -1, which means it tends to be more on the sweet side.

This Saké is brewed in a very traditional kimoto style, a term roughly translated as "original yeast starter." John Gauntner states: "Kimoto, in short, refers to sake made using a yeast starter (sort of a miniature batch of sake with a gazillion yeast cells in it, used as a "seed mash") made in a very labor intensive way in which the rice, koji and water are mashed into a puree for hours using exhausting techniques that involved mixing hard and "mushing" up the steamed rice grains with long poles. This helps lactic acid bacteria proliferate naturally and faster, preparing the environment for the yeast cells. It also takes more time, a month or so, rather than the two weeks needed for more common methods. More practically, kimoto methods lead to sake that is fuller, more complex and richer, and often a bit gamier as well. It can indeed be very lovely." This particular Saké was also fermented in cedar barrels rather than stainless steel.

The nose of this Saké lured me in with delightful fruit flavors, especially banana and melon. When I tasted it, the Saké initially was sweet and fruity, flavors of banana, pear, and melon, though it was not overly sweet. But, the flavors then transformed on the finish, becoming earthy and nutty. The sweetness largely vanished becoming more dry and almost a little bitter. It had a rich mouthfeel and was very intriguing how its complex flavors underwent such a change. This is a Saké with plenty of umami flavors on its finish, which should thus pair well with food. I found this Saké to be quite delicious and would definitely recommend it. I think even those new to Saké might appreciate the complexities and realize the potential of Saké.
Posted by Richard Auffrey at 6:00 AM