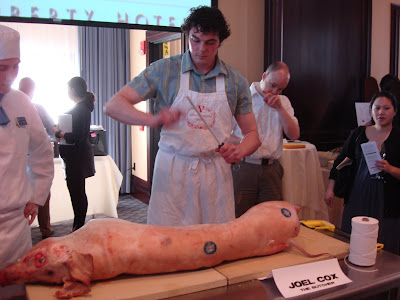 Yes, Joel Cox is getting ready to butcher that pig in front of hundreds of people. This was but one part of the intriguing and delicious Cochon 555 event which was recently held at the Liberty Hotel. In a later post, you will be able to see some photos of Joel's work.

The basic idea of Cochon 555 was: "Five Chefs, Five Pigs, Five Winemakers.” Five top local chefs each received a 70 pound heritage pig which they could cook anyway they desired. The chefs's dishes would be judged based on the creativity and flavor of their dishes and the winner would be crowned the “Prince of Porc.” There was a panel of judges plus all of the attendees got a vote as well. The chefs included: Jamie Bissonnette of Toro, Jason Bond of Beacon Hill Bistro, Tony Maws of Craigie on Main, Joseph Margate of Clink, and Matthew Jennings of Farmstead Inc.

My time at Cochon 555 began a bit earlier than many of the other attendess as I spent a little extra money to purchase a VIP ticket, and it was well worth it. The VIP ticket granted you access earlier to an exclusive food and drink event including more wine, cheese and pork. 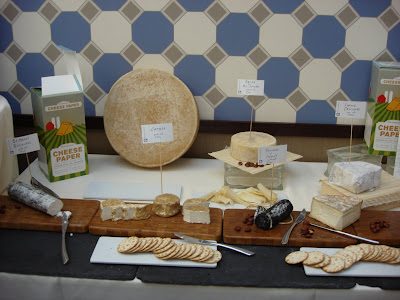 South End Formaggio presented two tables of varied and delicious cheeses and crackers. I sampled plenty of the cheeses, savoring all that I tasted. There was not a bad one in the bunch. I have long been a fan of this store and they have an excellent selection of artisan cheeses, as well as other gourmet foods and wines. If you visit the South End, then you should check out this store.

On their tables were also containers of Chicharrones, supplied by 4505 Meats. Created by Chef Ryan Farr in San Francisco, they are supposed to be: "Drawn from only the best local sources, our Chicharrones contain natural pork, sea salt, cane sugar, and the finest chiles." But what are they? Thin, crunchy, and tubular in shape (thought they were not hollow), they were very light but had an explosion of flavor. Their saltiness was most prominent, though not overly so, and there were hints of sweetness too. I found them to have a bit of smokiness in the taste as well. All I know is that I devoured a fair amount of them, finding them quite an addictive snack. 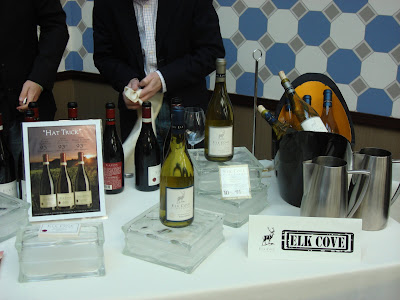 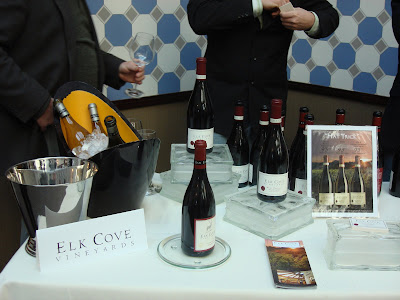 All five of these wines impressed me. The two whites (both about $19) had plenty of flavor and character, showing how both of these grapes can really make very good and distinctive wines. And all three Pinots were quite tasty, silky smooth and full of lush flavors. There were the type of Pinot Noirs that really please me, hedonistic wines yet restrained as well. Rather than boldly attack your palate, they seduce you, and they worked their magic on me. I am going to pick up some of these wines in the near future, and will provide fuller reviews. They definitely get my full recommendations. 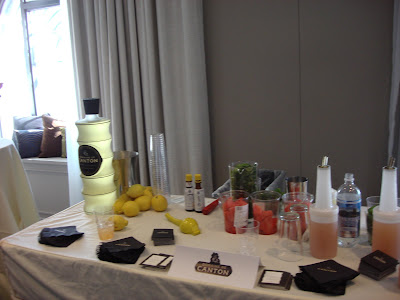 Besides the fine wine, I was also quite intrigued by Domaine de Canton, a French Ginger Liqueur (about $32). The liqueur is made from fresh baby Vietnamese ginger which is then macerated with various herbs and spices. Then, some eau de vie, VSOP, XO Grande Champagne Cognacs, Tahitian vanilla, Provencal honey, and Tunisian ginseng is added to the mixture. It is made by hand, in small batches, and is all natural. Certainly a curious and intriging blend of ingredients.

I tried the liqueur on its own, in a Domaine de Canton Cocktail, and in a Watermelon Mojito. On its own, it has a strong ginger flavor and a bit of sweetness, though not cloyingly so. There were some underlying spice notes as well. Both cocktails were delicious, with the ccompanying ginger flavor enhancing the rest of the tastes. It added only a bit of sweetness to the cocktails. I really liked the Watermelon Mojito.

They passed out some small sample bottles of the liqueur and I have since made cocktails at home with it. I mixed it with a non-alcoholic mojito soda as well as trying it with a few different juices. In all of the drinks, the ginger flavor seemed to enhance the drink, making it quite refreshing. My family and friends who tasted the drinks all enjoyed them as well. I think this liqueur would make some fun summer cocktails and I look forward to taking a pitcher of them to a BBQ or beach party.

There was one additional item at the VIP area that I want to mention, a comparison tasting of pork from five heritage pigs. But that deserves its own post.

I've been a big fan of the Elk Cove Pinot Noir myself. I've been getting it from the NH Store. When they have case discounts on the category you can catch it for just over $20 (although I see it there for $26.99 right now):