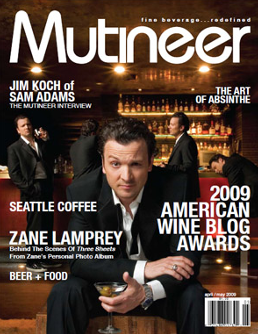 Is wine print media dead? Not by a long shot. In fact, another new wine magazine has hit newstands at places such as Barnes & Noble and Borders book stores. The latest issue, their fifth, of Mutineer Magazine (April/May 2009) is now available. Previous issues were only available online. Mutineer Magazine is currently a bimonthly magazine though they have eventual plans to make it monthly. The fifth issue is 82 pages long and has a reasonable cover price of $4.50.

This magazine has received much praise from other wine bloggers. I suspect that a primary reason for this acclaim is that the magazine highlights the efforts of many different bloggers, far more than any other existing wine magazine. Simply put, it is very blog friendly and that will obviously appeal to bloggers. They receive attention that is largely absent from other wine print media.

The magazine has a column, "From the Mutineer Blog," which provides excerpts from their own blog. This issue also had an amusing bit of wine satire written by the HoseMaster, an irreverant wine blogger known for his photos of nude and semi-nude women. There is also an article on the recent 2009 American Wine Blog Awards, with descriptions of all the finalists and winners. But they don't just discuss wine bloggers. The issue even has an interesting survey of spirits bloggers as well as a list of 16 recommended spirits blogs.

This emphasis on blogs can only help spread the word about wine, beer and spirits blogging and likely will increase readership of blogs. Mutineer certainly deserves kudos for their support of blogging. But, as practical matter, for those who are already bloggers and read other blogs, some of the articles in this magazine may be repetitive of what you might have already read. For example, I really gained little from the American Wine Blog Awards article. Plus, as I read the Mutineer blog, the excerpts from their blog in the magazine were repetitive.

As one of the magazine's founders is a beer expert, then you can expect a fair share of beer coverage. This issue has two major articles on beer, one on beer and food pairings and the other is an interview with Jim Koch, founder of the Boston Beer Company. Personally, as I dislike beer, these articles did not appeal to me. Though if you like beer, I am sure both articles will appeal to you. They are well written and informative articles.

Some of the other articles you will find include: wine and soup pairings, from chicken soup to beef stew; a restaurant review of Falcon Hollywood; some food and drink recipes for home entertaining; the coffee houses of Seattle; a photo report by Zane Lamprey, host of the television show "Three Sheets"; and a debate on the proposed Oregon excise tax increase on brewers. All in all, a diverse selection of topics and the articles often possess some nice photography. It is a slick, aesthetically pleasing magazine.

Overall, I am a bit conflicted about this magazine. It has some good points, including its promotion of blogs, but then it also feels like I am paying for some information I read for free online. This particular issue also did not have too many articles that really interested me, though that is partially a matter of personal preference. I read plenty of magazines where a particular issue may not appeal to me though overall other issues make up for that. Mutineer Magazine has plenty of potential and I hope that I will enjoy future issues more.

Mutineer Magazine is coming to the Boston area as part of a promotional tour. Alan Kropf, founder and editor, will be at the Boston Wine School on April 14. He will first lead a workshop on beverage writing and publishing. Then, there will be a mini-launch party at 7pm. Tickets cost your age. You pay $21 up front and then the rest at the door, to benefit the Greater Boston Food Bank. One of the highlights will be when publisher Alan Kropf stages his Wine Snob Smack Down!
Posted by Richard Auffrey at 6:00 AM

I now subscribe to Mutineer and enjoy it. Looking forward to meeting Alan at the launch party as well!