In my prior post on the UNLVino grand tasting event, I mentioned that I had found a special drink that really impressed me but also was a bit of a disappointment. Fortunately, my disappointment has lessened after I did a bit of additional research when I returned from Vegas. What might surprise you is that this special drink I found at a wine tasting event is not even alcoholic.

One of my favorite beverages is fresh brewed, unsweetened iced tea. It is something I drink nearly every day, all year round. I much prefer it to soft drinks as it is very refreshing without any carbonation or sugar. I don't like when restaurants only serve iced tea during the summer as it should be a year round drink. I have never before liked bottled iced teas.

Most bottled iced teas are sweet and I usually avoid them. Though some bottled iced teas are unsweetened, they just don't taste right. They certainly do not taste fresh brewed. They almost seem artificial, and even sometimes carbonated. I have tried many different brands, and none of them really satisfied me. Until recently. 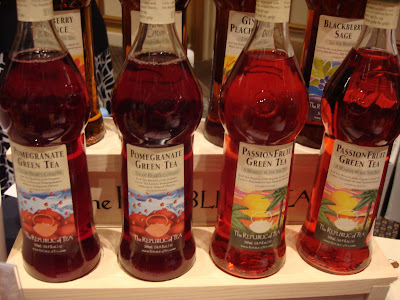 While perusing the various tables at UNLVino, checking out the wines that were available, I came upon The Republic of Tea where they had some bottled iced tea. I had some familiarity with their products, having previously purchased some of their loose-leaf teas at Whole Foods. But had never seen their iced tea before. I was very skeptical as I scanned the various flavors available. I thought they might be too sweet or taste artificial. I was very wrong.

I first tasted the Raspberry Quince, one of their unsweetened, black teas, and I was shocked. It was so very different than what I expected. It actually tasted like fresh brewed iced tea. There was no carbonation, no artificial taste, no sweetness. The fruit flavors were there but they were more subdued, enhancing the taste rather than overwhelming. It had an amazing taste, exactly what I have been seeking for a long time. If I had to undergo a blind taste test, I would be unable to tell that this iced tea came from a bottle.

I tried a number of their other flavors and my feelings were the same. They were all delicious, and tasted just like fresh brewed. I was so delighted to have discovered this wonderful drink.

It is also good to know that the iced tea is organic, has no calories, no carbohydrates, no sodium, no artificial colors, no artificial flavors, and no preservatives. They are available in either Black or Green Tea in flavors such as: Black Tea--Ginger Peach (also in decaf), Raspberry Quince, Mango Ceylon, Blackberry Sage, and Republic Darjeeling; Green Tea--Passion Fruit, Blueberry Green Decaf, and Pomegranate. Rather than have fruit juice added to the tea, generally the fruits are dried and brewed with the tea leaves, thus adding their flavor without any sugar.

All of the teas, except the Republic Darjeeling, were available in 500ml glass bottles ($4.75). And that is where my disappointment initially came. I was told that the glass bottles were only available at hotels, restaurants and spas. They were not available in any retail stores and they had no plans to do so in the future. So, though I had found this amazing iced tea, I would not be able to buy it. Very frustrating. 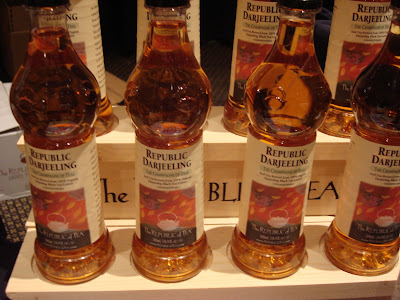 The Republic Darjeeling came in a plastic bottle and I was told it might be available in some retail stores. So I endeavored to hunt for it once I returned home, greatful at least that I might be able to find one of their iced teas. My search met with much greater success than expected.

First, you can order the iced tea through their website and it appears you can buy both the glass bottles and plastic ones. The 12oz plastic bottles cost $2.79 each plus they have more flavors available than what I saw at UNLVino. So, no matter where you live, you should be able to order this iced tea.

Second, I received information that at least a few Massachusetts stores, and maybe more, do carry the iced tea. These include:

If you love fresh brewed, unsweetened iced tea, then these bottled iced teas are going to satisfy you. I am very picky when it comes to my iced tea and I was thoroughly impressed with these drinks. They are a bit pricey but they are also a high quality product. Check them out.
Posted by Richard Auffrey at 6:01 AM

Sounds awesome. I rarely buy bottled beverages because most are loaded with sugar...I'll have to remember to seek some out next time we're in Newburyport.

I would love to hear your thoughts if you do try some.

You and I are 100% aligned on drinks. Can't stand the sweet stuff and that's all there is for the most part out in the world's coolers.

I first had Rep of Teas' teas myself a couple of months back and I was amazed at the flavor and freshness of them. I immediately contacted them through their website to find out where I could buy these. They are at very few small boutique grocers here in the sf bay area of California and I think they are absurdly overpriced on their website. If you know of or find a good internet discount seller of these I will be buying cases of them for sure.

Hi djm,
I will certainly post about any deals I see concerning this iced tea. Though I don't expect to see any soon. But we can hope.

I recently tried the Pomegranate Green variety in a restaurant in Houston (Red Onion) and had the same reaction as you did: it was the best bottled drink I've ever had. I love the flavor. I did the same internet search and found the large bottles on Republic of Tea's website. Another web seller had them at a better price but the shipping cost more than the tea. Locally (Tallahasse, FL) I can find the teabags in that flavor as well as the small (12oz) bottles at The Fresh Market for $2.59. TFM is based in NC but has stores throughout the southeast. World Market also sells some of the flavors in those plastic bottles. Hopefully these will be available in more places soon. Good luck with your search.

I 100% agree with you. The Republic of Tea ice teas are the best I ever had. I was attending a symposium in San Diego earlier this week and they were offered during refreshment breaks. I was skeptic at first, but I was really amazed. Since then, I am trying to find them at home. Yes, I know I can order them from their Website, but getting liquid (mostly water) delivered for California to Quebec is far from ecological and not cheap at all ! If someone knows a distributor in Montreal, please let me know NOW.

I also have found bottled Raspberry Quince to be A) like no other and B) priced beyond what I'm comfortable spending. I've managed to cajole a local restaurant into "wholesaling" me a case now and then, but would love to be able to brew it myself (using their bags.) Alas, all home brews attempted don't come anywhere near the bottled stuff.